Since 9/11, the question of national security has overshadowed every other consideration in most of the nation states especially those who have been the target of international terrorism and those who, due to their close proximity to active geostrategic hotspots, are feeling the heat of protracted war against terrorism, including Pakistan. As national security takes the most prominent consideration for every nation-state, balancing the necessities of national security and provisioning of civil rights under the respective constitution of each nation-state remains a subtle question mark?

Though the phenomenon of human rights being compromised at the cost of national security is nothing new yet, it has intensified post 9/11 in many regions of the world giving rise to the resentment and sense of deprivation among the segments of populations caught in the conflict zones.

Pakistan is no exception to this phenomenon and is facing a massive populist Pashtun movement taking the country and international media by storm. Allegations and counter-allegations, use of social media and inclusion of ethnic sub-nationalistic politics in this volatile situation has turned it into an elusive security-rights situation for the state where seeking a balance between the two to ensure the rights of the protestors without compromising the national security is a task to be reckoned with. Especially a state where there is virtually no government, courts are questioning the functionaries of the state, economic meltdown hinting towards another bailout from IMF, political polarization is on the rise and socio-economic development is sinking in the void created by class-based divisions.

Regardless of the true nature of PTM, the only option for the state is to embrace these people and engage them through public dialogue

With such complexities, governance can be nothing short of a nightmarish challenge for any government. Such a challenge becomes more insurmountable in a country like ours where there exists practically no long-term politically stable model of governance. The political history of the country is marred by military takeovers and subsequent under-the-table deals by political elites alienating the political leadership from aspiration of the masses.

Failure of political leadership stemmed from such deals in the past gives birth to Pashtun Tahafuz Movement (PTM) like phenomenon. This lot of political elite has completely failed to cope with the challenges of a state which according to many global geopolitical commentators is in the ‘eye of the storm’. The question of balancing between national security and civil rights is often left to the security establishment of the country which is a dangerous route, to begin with.

Pakistan has been fighting a war on terror against foreign and home-grown militant wings in FATA for the past 16 years. Unfortunately, not for once, the issue of mainstreaming FATA was addressed in the context of protecting both the territory and the rights of those living there. This is the cost of the makeshift political leadership which Pakistan is now bearing in the form of anti-state agitation by those very people for whom the security forces lost thousands of their finest men. 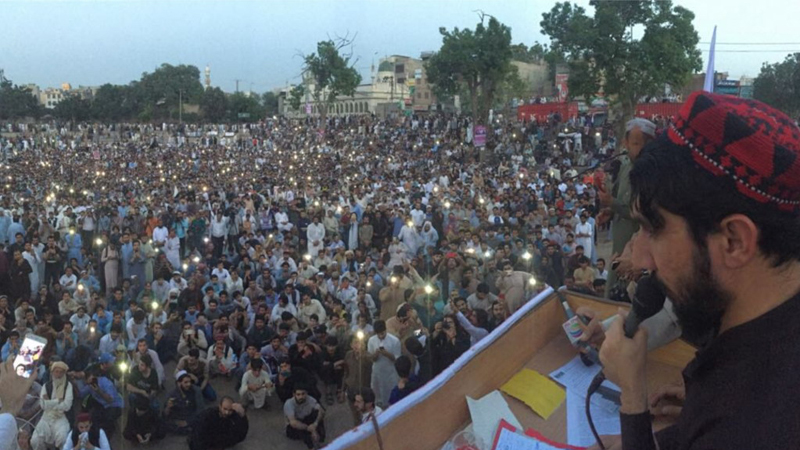 Those who are agitating against the same security forces have their own reasons and not without merit too, like the hardship of going through multiple check posts, strict and untamed behaviour of security personnel and lack of economic opportunities for these war-torn regions. This is just one half of what Pashtun movement is complaining about, the other half is related to the question of integration of FATA with mainland Pakistan, eradication of FCR, gaining financial autonomy and establishing local administration like other provinces of the country.

When one looks at the other side of the situation, it is vivid that Pakistan army has done a lot more than fighting terrorism in this region. Whatever rebuilding and rehabilitation efforts have been done so far in this region, Pakistan Army has spearheaded those. Sacrifices of the troops aside, Pakistan army has built hospitals, schools, and markets which were destroyed in counterterrorism operations during the previous years.

Security check posts developed all over FATA to ensure the safety of the locals and mainland Pakistan and this practice has paid dividends which is evident from the sharp reduction in terrorist attacks across the country including FATA and KP.

Notwithstanding all these tireless efforts by Pakistan army to re-establish war-torn regions, the fact remains that in any democratic nation, this is NOT army’s job to govern, administer and police any region in post-operation phase. Civilian institutions must take over and come forward with policies and plans ensuring participation of local population which is critical for trust building. Such an approach also signals to the locals that security forces were there just to restore order and not to police them as is the Pakistan army being compelled to do in FATA despite the fact that all active military operations have been completed.

Security personnel employed at these check posts were trained to fight the terrorists.

This is the job for the police force but in FATA there is no police force as the region still remains constitutionally under the FCR. Recent overtures to merge the region with the KP were thwarted by the federal government to secure political mileage. Consequently, the status quo prevails and Pakistan army remains perforce there to police the region and thus the PTM agitation gets a new impetus for continuing their agitation.

Regardless of the true nature of PTM, the only option for the state of Pakistan is to embrace these people and engage them through public dialogue both locally and on national media as well. Such engagement is only possible after and calls for implementing FATA reforms at the earliest so that Pakistan army could be disengaged from police duties.

Countering a popular movement with yet another counter-movement is probably the worst way to handle this situation which is part of our overall stymied national security dilemma. Doing so is the recipe which we cannot afford to savour. We simply cannot afford to complicate this equation anymore. So engage the genuine PTM leadership and a solution will emerge through the dialogue or else the PTM shall stand exposed and whoever prompting them to instigate ethnic clashes in the country will lose all their investment and interest in them.

The writer can be reached at janashah.journalist@gmail.com