Water scarcity: a threat to economy

Water policy should focus on sustainable use of water, and increasing the current water efficiency by switching from conventional to conservative agriculture

Underneath the major news headlines highlighting the socio economic issues faced by Pakistan, a major water crisis is brewing up silently since years, which is being ignored. This water crisis is evolving continuously and has serious implications for the future of Pakistan. This problem was noted by International Monetary Fund a couple of years and advised Pakistan to employ water management techniques to harness this problem.

Pakistan has unfortunately been included in the 36 most water stressed countries in the world and more recently UNO has placed Pakistan at the 7th position amongst these countries. The root cause of this calamity is not the shortage of this natural endowment but the poor water policy, rapid urbanisation, corruption and management. The problem is more pronounced in the cities where the access to clean water to its residents have declined from 97 percent to 94 percent over the period of last three decades, even though the overall access to clean water has increased from 86 percent to 91 percent, majority of this happening in the rural areas. This downturn in the cities is being compared to war torn countries like Syria and Gaza.

According to IMF even though approximately 60 percent of farm-gate-delivered water in Punjab comes from tube wells, it remains largely untaxed. Although it accounts for over 20 percent of the GDP, the taxes from agriculture currently contribute less than 0.1 percent of total tax revenues

This is mainly the result of a politically instable management in the country and the growing level of mismanagement and corruption amongst the authorities, which allows the drinking water to be contaminated with sewage and industrial waste. Adding fuel to the fire is the rapid depletion of the ground water may cause drought like situation in the major cities of Pakistan. Furthermore, the quality of the ground water is rapidly being contaminated with heavy metals like copper and nickel, which is causing the spread of disease such as hepatitis in the major cities. This is a disaster waiting to happen and if triggered fully will send the country into even a greater political crises.

However, certain measures can be taken to combat this looming threat over Pakistan’s stability. Firstly, it is important for all the political aspects involved to form a consensus and taking and implementing tough decisions beneficial for the whole economy. This is mainly important, as Pakistan is an agro-based economy with agricultural products and crops making up to 20 percent of the GDP and making it the biggest consumer of the water. 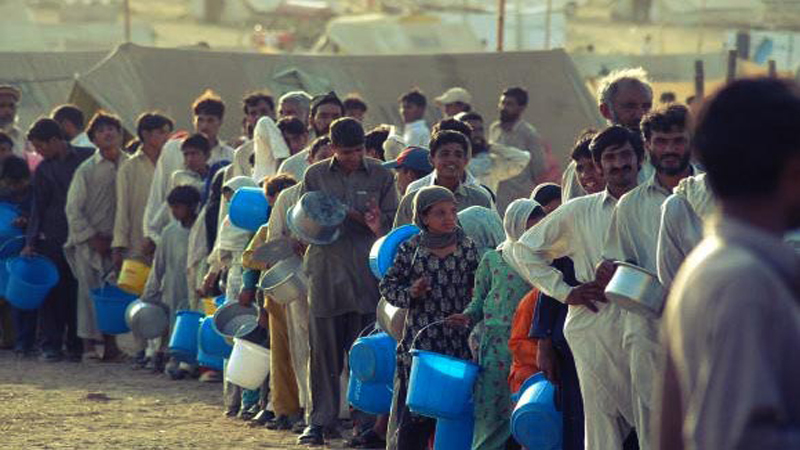 This means water is currently the main driving force of the economy. Therefore, water policy should focus on sustainable use of water increasing the current water efficiency by switching from conventional to conservative agriculture. Moreover, additional irrigation of arid areas of southern Punjab is possible by extending the Indus basin irrigation networks. Other measures suggested include construction of water reservoirs, reduction in water losses through seepage, leaching and percolation by lining of Canals, Distributaries and Water Channels Controlled over pumping of underground water and over irrigation practices. Also, special attention should be provided to ensuring water treatment facilities and developing cost effective water disinfection and filtration plants, so that a safe drinking water is guaranteed to all irrespective of area or the economic conditions of the household.

Apart from these physical measures, that require investment in the water infrastructure by the local authorities, the IMF also suggests reforming the agricultural taxation systems in the provinces.

According to the IMF even though approximately 60 percent of farm-gate-delivered water in Punjab comes from tube wells, it remains largely untaxed. Although it accounts for over 20 percent of the GDP, the taxes from the agricultural currently contribute less than 0.1 percent of the total tax revenues. In addition to this, it is absolutely pertinent to have a system to make sure the powerful landowners do not escape taxes and bring agriculture into the net tax.