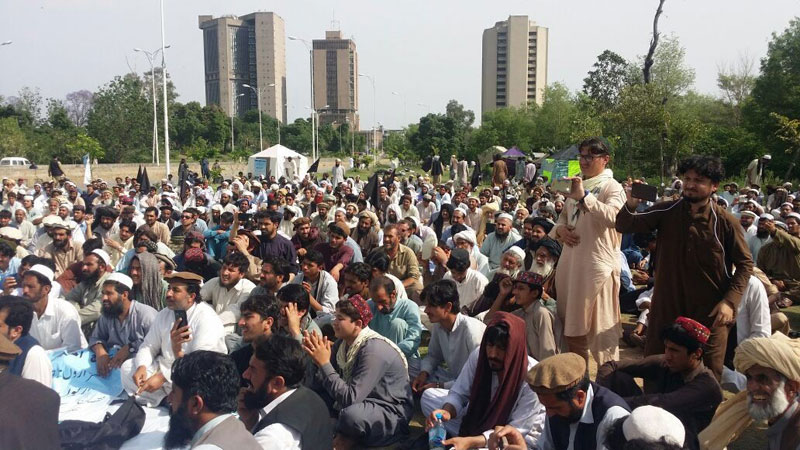 ISLAMABAD: Traders from North Waziristan tribal region ended their four-day sit-in in Islamabad Friday after military assured them that they would be compensated for their losses and their businesses will be restored.

Thousands of shops were razed to the ground in Miranshah and Mir Ali, two main towns in North Waziristan, during operation against the Taliban and foreign militants in June 2014.

Stakeholders failed to compensate the affected businessmen that forced hundreds of North Waziristan traders to stage sit-in outside the National Press Club in Islamabad.

Representatives of the protesting traders disclosed that they met Inter-Services Public Relations (ISPR) Director General Maj Gen Asif Ghafoor in Rawalpindi and reached an agreement on compensation for the affected businessmen.

According to a hand-written agreement, a meeting of the North Waziristan political agent, general officer commanding (GOC) and Anjuman-e-Tajiran North Waziristan will be held in Miranshah on April 22to form a committee that will make estimates of the losses of the shopkeepers in order to compensate them. DG ISPR is also likely to attend the meeting.

Assistant Political Agent Taimur will be responsible for the implementation of the agreement, according to the agreement.

Senator Aurangzeb Khan and President Markazi Anjuman-e-Tajiran Ajmal Baloch, who led the traders delegation in talks with the DG ISPR, will be the guarantors.

Traders representative Shafiq Muhammad said they will again protest in Islamabad if the agreement was not implemented. He said the traders held nearly three-hour meeting with the DG ISPR and received assurance on behalf of the army chief that their trade will be brought on track.