Religious militancy and ideology of Pakistan

Pakistan is a Muslim state, but its idea does not have any connection with the ideology of militant religious extremism

Islam is derived from the word ‘Salaam’, which means peace. It preaches the establishment of an egalitarian social structure. The theme of Holy Quran is humanity. Hazrat Muhammad (SAW), the prophet of Islam, is called the Rehmat-ul-lil-alimeen (Blessing for the entire universe). Islam orders its followers to keep away from militant religious extremism, aggression, corruption, injustice, violence, chaos, and disturbance. Islamic teachings promote modernity, tolerance and moderation.

Some writers, religious elites, politicians, Intellectuals, and religious extremist people believe that Pakistan was created for Islam and Islam being an ideological command should lead all socio-cultural and political matters. The problem does not end here; the people of Pakistan belong to various sects and every sect demands enforcement of their own version of Islam.  Pakistan was not created under the leadership of religious Ulema, and it was not created as an ideological state. Islam might have been used as a political tool during the freedom movement to gain the support of the Muslim community at a lower level, but neither Jinnah nor the top leadership of Muslim League ever used the slogan of Islam.

After partition, the founder of the country, in his 11 August 1947 speech in Constituent Assembly explicitly rejected the idea that Pakistan would be an ideological state by committing to the secular notion of the equal status of all citizens irrespective of their religion. Unfortunately, religious elites began to demand an Islamic constitution and political system in the state. Objective Resolution was passed which says that state will enable its individuals to follow Islam. Later on, it became a trend to use religion to sanction political activities. Even Ayub Khan (considered as liberal leader) used religion to oppose candidature of Fatima Jinnah who was contesting elections in 1964 against him by raising the issue that women cannot become a ruler in an Islamic ideological state. ZA Bhutto used and misused Islam to get the support of religious parties. Ziaul Haq misused Islam for the protection of his despotic rule in the country. Almost every politician used and abused the religion and ideology of Pakistan according to the suitability of their self-interest and environment of the country. The protection of ideology which is based on biased extremist narratives culminates the sectarianism and hatred for America.

Islam might have been used as a political tool during the freedom movement to gain support at a lower level, but neither Jinnah nor the top leadership of League ever used the slogan of Islam

Sectarianism and jihad both are mixed in Pakistan because the state commanded jihad in Kashmir and Afghanistan and it was the strategy of the government to protect the national interest of the country against India and the Soviet Union. When a jihadi outfit got into troubles as a result of its indulgence in sectarian or simple criminal violence, it was rescued by the intelligence personnel, usually drawn from the army. The jihadi outfits were raising money freely from the public through the use of the religious notion of jihad. Apparently, they were fighting against the Soviets and Indians, but critically they had the sectarian political agendas too. 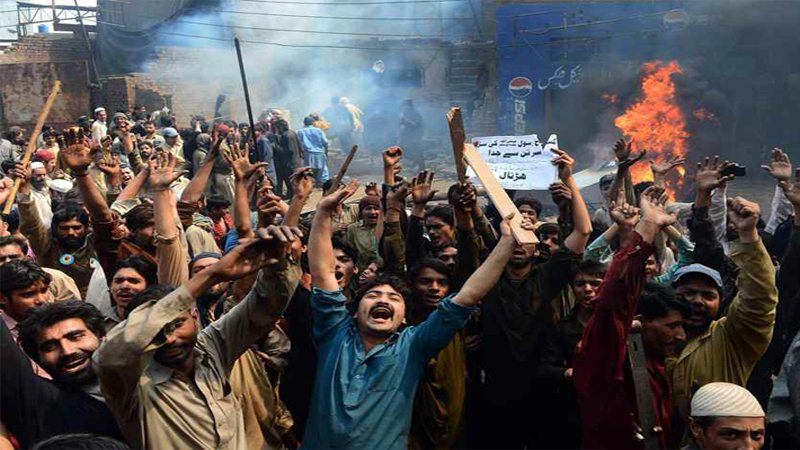 Pakistan was hardly sectarian at the time of its birth. But it became more after the passage of time and the period of 1980’s was the most favourable for the growth of sectarianism. The religious parties during all previous elections in the history of Pakistan could only win a few seats. The best strategy for these religious parties is to divide the country on sectarian religious grounds. The leader of these religious political parties wanted to reach the corridors of power through the use and misuse of religion in their politics.

A large number of religious groups spread hatred against America and the West on the issue that Islam is endangered due to the friendship of the US and the West. They urge Muslims and religious fanatics to kill the western and American nationals. For a justification of their attitude towards America and West, the religious groups mostly refer to the pathetic and miserable situation of Muslims in various parts of the world. They claim that the west is uniting to keep the Muslims backwards only because Muslims have the potential to fight for their dominance, the NGO’s are the tools, and so fighting them is an Islamic obligation. They express jihad as the only option left to deal with western countries and minds.

The writer is an Assistant Professor at Department of Political Science GCU, Lahore. He can be reached at saqibkhanwaraich@gmail.com