‘Patriotism is the last refuge of a scoundrel.’ — Samuel Johnson 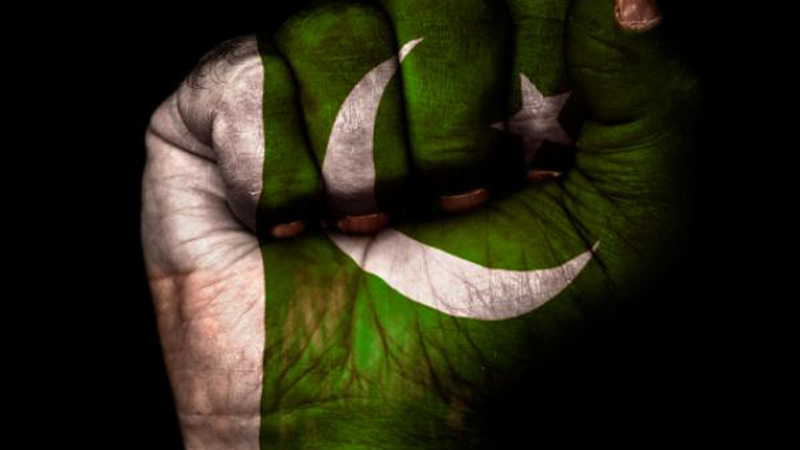 Sitting at home on March 23rd, idly browsing through my social media, I came across a stunning photograph. The picture showed a bedraggled young girl rummaging among smoking ruins. The caption identified her as a resident of one of the shanties that caught fire somewhere in Karachi. She was wearing mismatched clothes; her hair was matted and stuck together. Sad and motionless, she was looking through a half-burnt trunk holding something in her hand that looked like it might have been a doll but was now just a mass of ashes. I stared at the picture for a while, with many thoughts running through my head. Eventually, I downloaded the picture to my computer. I found another photograph of a Pakistani military parade with a missile launcher manned by some smartly dressed soldiers and uploaded both photos side-by-side to twitter with a verse of Faiz as a caption: ‘Nisar main teri galiyon k ae watan k jahan.

The purpose of this social media ‘provocation’ was, of course, to compel people to think about our priorities as a nation: manufacturing and procuring arms and armament worth hundreds of billions of rupees while a large segment of our citizenry lives in squalid misery with no hope of even obtaining two meals a day, let alone a better life. As I expected, my tweet was widely shared and most people appreciated it. However, as usual, there were a few responses that prompted this article. In comments, one person questioned (politely, thank goodness), what the meaning of this tweet was? To which, I replied that it was rather obvious what it meant: here we are parading our expensive military toys on 23rd March while children in our country are forced to scrounge through garbage to find their next meal. This, of course, elicited the expected response: why was I ‘anti-Army’ and why I consider the security of Pakistan an unimportant issue?

In 1998, then-US President Bill Clinton faced impeachment proceedings over allegations of having an affair with a White House intern, Monica Lewinsky. If convicted, he would have been removed from office. During his trial, Mr. Clinton, in response to a question from a prosecutor famously responded “It depends on what the meaning of the word ‘is’ is”. The statement was widely quoted and derided by the media as yet another example of official lying that that had eroded public trust in government.

At the risk of sounding like Mr Clinton, it would be worth it to ask what ‘Pakistan’ and its ‘security’ means? When someone accuses someone else of being anti ‘Pakistan’, what are they referring to? Contrary to the popular myth propagated by all governments all the time regarding ‘national unity’ and the need for internal cohesion, the fact remains that in any country, there exist many different classes and strata of people which come from different ideological backgrounds.

We are Punjabis, Baloch, Sindhis or Seraikis before we are Pakistani. Faiz pointed this out more than 40 years ago right after the East Pakistan debacle. Our founding fathers never bothered to define ‘Pakistani nationalism’

“There are the people who own what Marx called the ‘means of production’ and the ‘commanding heights of the economy’.” In Pakistan, this would include big landowners, major industrial houses and the upper echelons of the military and the state intelligence and security apparatus. These groups control, directly or indirectly, most economic and political activities of the country. The country’s political elite is also drawn from their ranks. Laws are written and enforced at their behest of the ruling elite to serve their interests. Law enforcement agencies work to protect them and they determine the direction of the country and its policies and priorities.

Next up might be what is euphemistically termed the ‘middle class’, because they are in between the ‘Ruling class’ (see above) and the ‘working class’. This stratum of society includes educated professionals, managers, teachers, lawyers and a whole host of people running the enterprises owned by the rulers. In a ‘third world’ country like Pakistan, this class is small and precariously poised. Their salaries and benefits depend on the goodwill of their rulers and they are perpetually afraid of losing their place at the table and falling down into the ranks of the poor. Their fondest dream is to join the ruling class, a dream that in most cases will never be fulfilled. They serve as the ‘ideologues’ of the rulers and produce the ideas and ideologies that perpetuate the status quo.

Below the middle-class is the seething mass of workers and peasants who are always on the verge of falling into utter destitution and starvation. As Marx famously said, the poor have no country. For them, rhetorical slogans like ‘patriotism’ and ‘nationalism’ are only jokes. Their entire lives are devoted to trying to ‘keep body and soul together’, earning a meager living and dreaming of a better life. So when we talk about the ‘security’ of Pakistan, what are we referring to? What does our huge defense budget, our atomic bombs buy us? Security for whom? The answer is obvious: the vast mass of Pakistan’s population has no need of atom bombs or missiles. Rather they need food, shelter, education, and jobs. And the argument that they are better off this way because otherwise they would be ruled by ‘Hindus’ is laughable. How would their condition be any worse under any other ruling class? Or to put it another way, have their lives, which are an ideal depiction of living in the slavery of a ‘Muslim’ ruling class, given them anything besides hunger and destitution? How about the idea of ‘Pakistan’?

What does it mean? Clearly, it means the country within certain geographical boundaries which came into being in 1947. But does being a geographical entity translate automatically into being a cohesive nation? Today, 70 years after independence, most people living in this country associate themselves first with an ethnicity and later (if at all) as Pakistani. We are Punjabis, Baloch, Sindhis, Seraikis before we are Pakistani. Faiz pointed this out more than 40 years ago right after the debacle of East Pakistan. Our nation builders never bothered to define the concept of a Pakistani nationalism, which came into being abruptly on August 14, 1947, rather than evolving over centuries as nations do. As a result, even seven decades after independence, this basic question still has not been answered. We seem to know what we are not: we are not Indians, we are not Hindu but then what exactly are we? The answer is that we are ‘Muslims’ which is, of course, a non-starter since Arabs, Malaysians, Indonesians, Moroccans etc are all Muslims and yet have nothing in common with us.

Pointing out the plight of the less fortunate in our society does not make one a traitor; neither does questioning obscene expenditures on armaments (with no oversight) or for that matter on ‘Orange trains’ and highways in lieu of hospitals and schools. The measure of a nation’s ability to progress is its capacity to tolerate dissent and disagreement. And those who criticize the government of the day in the service of their conscience and the conscience of their nation are the real patriots.