CJP should stick to his ‘faryadi’ remarks, says Nawaz 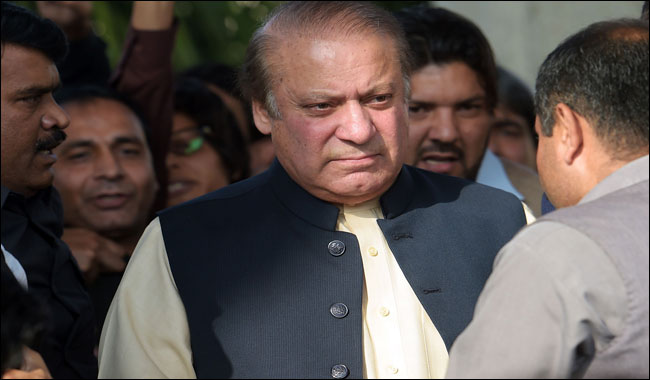 ISLAMABAD: Former prime minister Nawaz Sharif on Friday said that if the Chief Justice of Pakistan (CJP) had termed Prime Minister Shahid Khaqan Abbasi a ‘faryadi’ or supplicant, he should stick to his words.

Nawaz was referring to Supreme Court’s clarification which stated that the CJP had never used the word ‘faryadi’ or supplicant, as reported by the media, for the PM and that he duly respects the premier.

“It is categorically stated that this attribution to the Hon’ble Chief Justice of Pakistan Mr Justice Mian Saqib Nisar is completely wrong and malicious. The Hon’ble Chief Justice holds the Prime Minister in high esteem, being the head of the government, and has never used the word “Faryadi” for him. Any misgivings in this regard should, therefore, be put to rest,” the statement issued by the apex court read.

Speaking to the media in Islamabad, Nawaz Sharif said that a chief justice or any other person should not utter words such as ‘faryadi’. He added that CJP’s remark that ‘PM came with a plea’ is also objectionable and that if Justice Nisar has said that, he should stick to his words.

Nawaz also spoke about the Avenfield case against the Sharif family, saying that Panama JIT head Wajid Zia has ‘himself rejected all allegations and gave us a clean chit’.