A rendezvous with the ‘brilliance’ of Mohsin Hamid 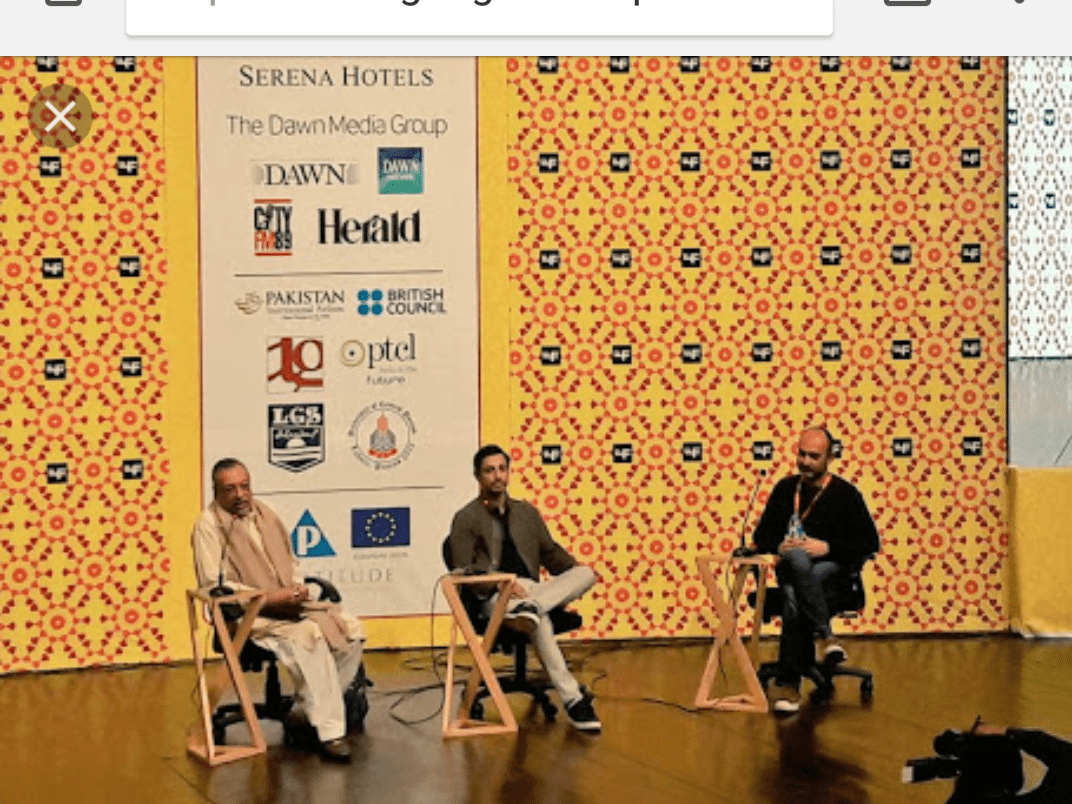 Lahore is a hub of activities, be it carnivals, concerts, food and music festivals or theatrical plays. Lahore Literary Festival held once a year is one such event that is most sought after and long awaited by the Literati of Lahore. We can meet people from historians to journalists and from authors to poets, from around the world in this fabulous event. I am also one of those who are always eager to attend it. This year however, LLF became a journey for me where at every stop I met a different book of Mohsin Hamid.

This year there was a heightened enthusiasm among people when the presence of Riz Ahmad in a session with Mohsin Hamid was announced. I was also super excited and planned to leave early. While I was on my way to Alhamra Arts Council to attend LLF, and particularly the session with Riz and Hamid, I was transported back to the time when I was, actually I still am, in love with the movie and the novel ‘The Reluctant Fundamentalist’. The novel was written by Mohsin Hamid and was published in 2007 and the movie released in 2012 starred Riz Ahmad in the lead.

From “you guys have got some serious problem with fundamentalism” to “We do it by focusing on the fundamentals”, the novel ‘The reluctant Fundamentalist’ makes the reader ponder over the true definition of fundamentalism. Shortlisted for Man Booker’s Prize 2007 and winner of the Ambassador Book Award (2008) and the Anisfield-Wolf Book Award (2008), the book revolves around the twist in the life of Changez, the protagonist of the novel. The book is short in length but remains in the reader’s memory for a long time .The movie, a Mira Nair directorial, is as amazing as the novel. Riz Ahmad has put to life the character of Changez in a very dramatic and passionate manner. The novel is mysterious and confusing, as there were many questions left unanswered, but the movie conveys well the true meaning of fundamentalism, through the narration of a man who was drawn back to his roots by the behaviour of certain people on the premise of 9/11 attacks. 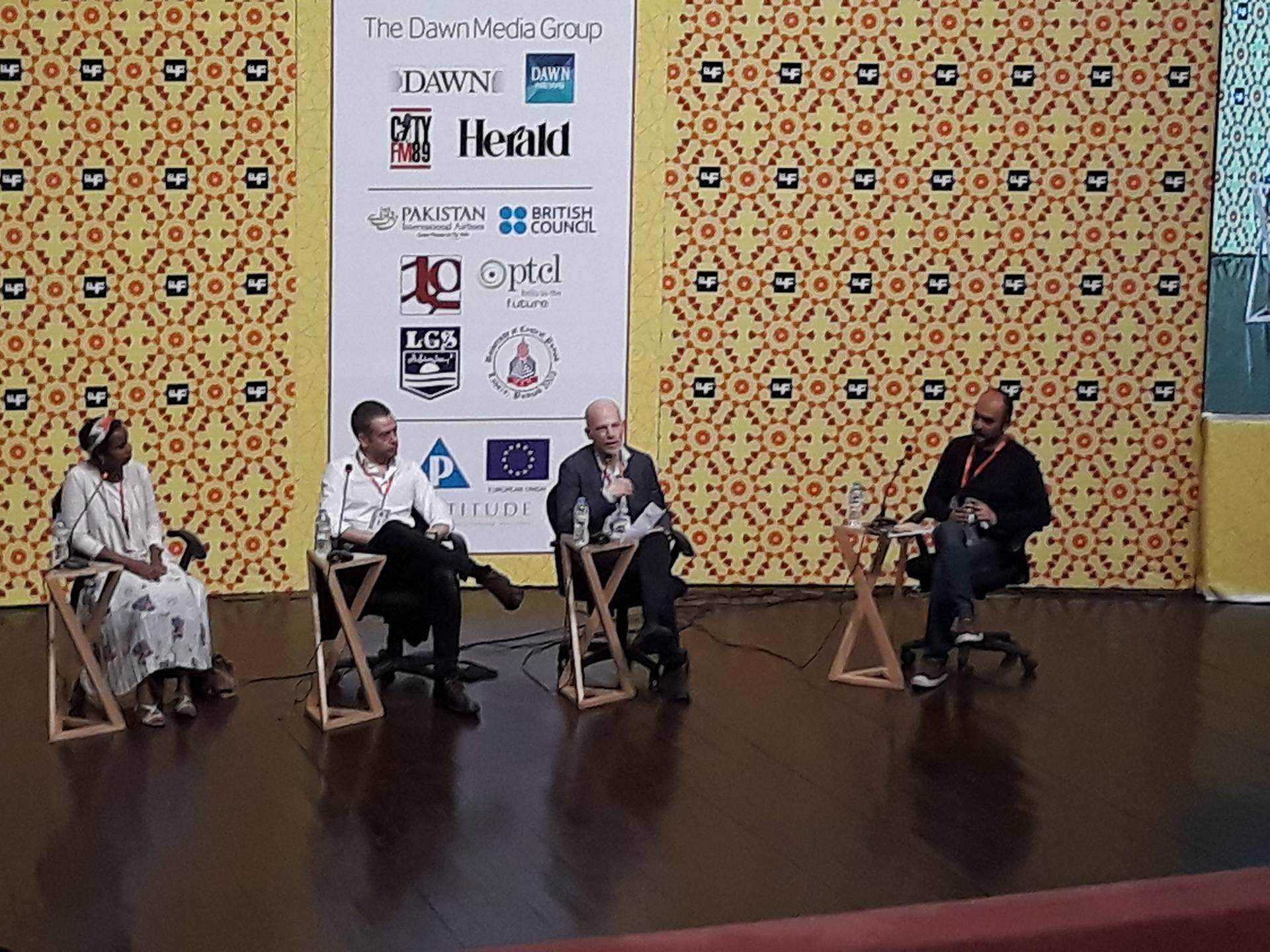 The Princeton graduate who was a ‘lover of America’ became a teacher and an anti-American rhetoric speaker in Pakistan, yet not supporting terrorism. Changez dialogues give us an idea that he talks rational. “The mismatch between their twenty first century weaponry and the ill equipped and ill fed afghan tribesman”… “You retreated into myths of your own difference, assumptions of your own superiority…..so that the entire planet was rocketed by the repercussions of your tantrums,”… “Such an America had to be stopped in the interests not only of the rest of Humanity, but also in your own”. The character of Changez was remarkably designed by Hamid as one who had a beard and was anti-American but one who understood that fundamentalism was not extremism rather it was rationalism.

Once you learn the true teachings of your religion, you realize that it fundamentally opposes terrorism and believes in humanity as a priority. This we learn with more clarity in the movie. The novel lacked this lucidity. It rather left the readers clueless and to decide for themselves if Changez was a terrorist or that the American interviewing him was an agent sent to kill him. But the movie certainly lacks the crisp of Hamid’s dialogues. We only get a little amount of them in the movie. So for a person like me who believes that movies can never do justice to the novel I believe they together present the gist.

My thought process was broken when I reached the venue. I rushed to Hall No 1 to attend the session but I was met with shock and surprise. The hall was full and many people were already pleading to the management to let them enter the hall. Such was the charisma of Riz that all the seats, even the staircases, were filled  and the ushers were asking people to go to other halls where many interesting sessions were  taking place. Since it’s always on a first-come-first-served basis, all of us had to leave. This had never happened before. At LLF people usually roamed around and easily entered any session. Disappointed and heart wrenched I went to hall No 2 to see what was there in line for me. It was a session on Aurangzeb – The Man and the Myth, a controversial book by Audrey Truschke. It was an amazing session about the Mughal King, and some misunderstood clichés about him. When Audrey was describing the family conflict of Aurangzeb and his brothers, I was again diverted to Mohsin Hamid’s book, ‘Moth Smoke’ this time. It was his debut book but I had read some days back. Yes, I read his first book after reading the ones that were written later. The dialogue on the very first page of the book, between a saint and King Shahjahan flashed in my mind.

“Who will sit on the throne after me?” asked ShahJahan.

“Tell me the names of your sons,” replied the saint.

“Dara is my eldest son.”

“The fate of Dara should be asked from Iskandar”

The Emperors toes curled beneath him. “Shuja is my second son”

“But Shuja is not Shuja”

“Murad will not fulfill his murad”

Emperor closed his eyes. “Aurangzeb is my youngest son.”

“Yes”, said the saint. “He will be Aurangzeb”

The novel won a Betty Trask Award and was a finalist for the PEN/Hemingway award. Hamid has named his characters after the Mughal Emperor’s brothers. The protagonist is Dara Shikoh Shehzad; Ozi, who is Aurangzeb, Murad Badshah and then Mumtaz, who is pretty enough to have made a Taj Mahal to define her beauty.

The author has captured the trauma, fear and helplessness of people facing such circumstances. They have to leave behind their homeland, families, memories and friends not knowing what awaits them ahead.

The Novel revolves around Daru, a former PhD student and a banker who loses his job and becomes a drug seller and a murderer meeting the same fate as King Shahjahan’s son Dara. Daru fell for Mumtaz, his friend Ozi’s wife and betrayed his friend by starting an affair with his wife. It is a story of Drau’s downfall and deterioration at his own hands. It is a story of a corrupt society which highlights the different classes of the people in Pakistan. The elite family of Ozi, parties in Lahore and use of drugs as a normal thing. There is a contrast in Daru’s lifestyle and his friend’s and somewhere trying to fill the gap, or due to his worsened financial problems, Daru was doomed. It is a true depiction of a society where only money, contacts and status work. People, intelligent and educated like Daru give away their sanity and sanctity when they can’t take such turndowns in their lives. This passage depicted the condition of Daru Shehzad.

“When I get home I find Manucci staring at a candle on the mantelpiece for no apparent reason.

I walk over to him, my shadow dancing on a different wall from his.

Sometimes I don’t understand what he’s talking about. But I do see a moth circling above our heads.

The poets say some moths will do anything out of love for a flame.”

I was roaming between ‘Moth Smoke’ and Audrey’s ‘Aurangzeb’ in my mind, when the session was finally over. After that I checked the schedule and realised that Mohsin Hamid was in another session. And that was my third stop. I met ‘Exit west’ there. Although I had read the novel but listening to Hamid, made me realise that there was much more to this novel than I could understand. I got the basic idea of why this novel was written.

The book is a finalist for the 2017 Man Booker Prize, Goodreads Choice Awards, Best Fiction, National Book Critics Circle Award for Fiction and recently nominated for LA Times Book Prize. It is a story of two ordinary lovers, Saeed and Nadia, who are followed by extraordinary circumstances, while they flee their country, which is at the verge of war. The surprise element in the novel of such realistic backdrop is the element of magical realism, in the form of surrealistic doors. Hamid has made his characters travel through time and space to reach Mykonos, London and San Francisco. The passage through the door is described as:

“It was said in those days that the passage was both like dying and like being born.”

“When we migrate, we murder from our lives those we leave behind”

Further in the novel we find how humanity works, people from different places, when stuck together due to circumstances, had to accept each other. We find survivors toward the end of the novel. We find Saeed and Nadia ending up in a mansion in London with other refugees from places like Africa and many others. They had to make a place for themselves in an alien environment and among different people. They had to ensure their acceptance in an unwelcome environment.

Hamid discussed in LLF that his book resonates with the current situation the world is facing. He believes that it is important to forget the boundaries and talk about humanity. When people are forced to leave their homes and cities or countries due to bombings and war, what kind of rights do they get in next place they will have to reside in? They need acceptance and same rights as the citizens of that country.  He said that he believed there was a right to migration in the same way as there’s a right to love whom you like or say what you want to say. Hamid believes that the wealthy nations who are unwelcoming to migrants should realise that they have to break the boundaries as it is going to be inevitable in the years to come.

That day I attended many interesting sessions but the best part was my meeting with the ‘Brilliance’ of Mohsin Hamid as I call it. Mohsin Hamid is no doubt an ‘Esprit Brilliant’ and has made his name among some of the finest authors of the world.

The author is an English literature graduate and has a passion for writing. She can be reached at tabindakshiekh@gmail.com