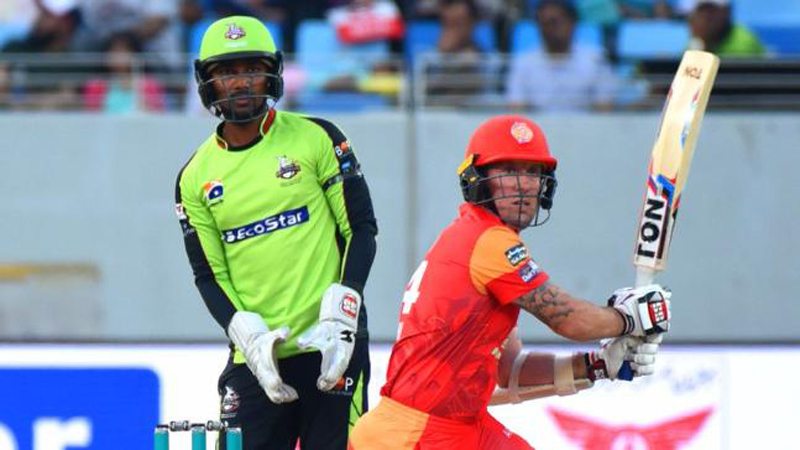 DUBAI: Luke Ronchi through his dazzling batting helped Islamabad United crush Lahore Qalandars by six wickets in the 18th fixture of the Pakistan Super League III at the Dubai International Cricket Stadium here on Thursday. This was Islamabad’s second victory over a hapless Lahore side this season, the first one having come in a Super-Over finish. Chasing target of 164, Ronchi found the form of his life and hit six maximums and five boundaries to score 77 off just 41 balls. His fifty came off just 22 balls – the joint fastest in the PSL. In the end, it was a walk in the park for Islamabad as they chased the target with six wickets and 14 balls to spare. Sunil Narine claimed three wickets for Lahore. Lahore, with yet another disgraceful performance in the PSL, have pieces to pick and preparation to do when the 2019 edition of PSL kicks off.

Lahore had dropped out-of-form Umar Akmal, bringing in Anton Devcich as his replacement. Earlier, asked to bat first, Lahore misread the script once again after Fakhar Zaman and Devcich gave them a blistering start. With nearly 100 runs on board inside the first 10 overs, they played the next seven overs without scoring any boundary. Lahore wasted their flying start, adding just 22 runs between 11th and 15th overs. With just one-quarter of their innings left, Lahore were 116-2. The miserly Shadab Khan gave away just four runs in the 16th, whereas Faheem Ashraf enhanced his burgeoning reputation by removing both Denesh Ramdin and Devcich (62 off 42) in the 17th over. Captain Brendon McCullum’s (33 off 12) quick runs however helped them score 163. Ashraf picked up three wickets for Islamabad, while leg-spinner Shadab finished with figures of 4-0-15-1.