If Pakistan is to meet Goal 2 of the SDG’s, it has to radically improve the nutritional status of its entire population

‘End hunger, achieve food security and improved nutrition and promote sustainable agriculture.’ This is the ones of the goals of the Sustainable Development Goals envisioned by the world community for 2030, which Pakistan also seeks to achieve by the end of the next decade.

However, in reality the situation is very bleak in the country with the United Nations linking under-nutrition to economic causes rather than availability of food, and malnutrition to overall attitudes towards health that are prevalent in the society.

One of the most effective indicators for determining the nutritional health of a country is to look at the nutritional status for children under five years of age. Unfortunately in the case of Pakistan, these indicators are particularly worrisome with 40 percent of the children being underweight.

Almost half of the children are affected by stunting and about nine percent by wasting. Stunting results in children experiencing low heights due to absence of essential micronutrients in their food that include iron, zinc, magnesium and calcium. Furthermore, wasting is an acute form of under-nutrition in which the body muscle and fat start getting utilized for metabolism.

In reality, the situation is very bleak in the country as the United Nations links malnutrition to the economic causes rather than availability of food

Another indicator used to gauge malnutrition of a population is the nutritional status of women, since a women’s health has a vertical impact on the health of her children. In Pakistan, 49 percent of women are moderately anemic according to WHO, that shows the magnitude of the problem in the country.

Furthermore, there are certain stigmas attached with breastfeeding, where mothers do not breastfeed their children in the appropriate frequency and time period, and often use alternatives such as infant formula, ghee, honey and sugarcane. This is one of the major reasons for stunting in children.

The United Nations recommends exclusive breast feeding for the first six months for babies, which in Pakistan is practiced only by 38 percent of the mothers. It is tragic, that families are willing to invest on infant formulas, instead of investing the same amount ensuring that the mothers are getting a well nutritional diet, so they can breastfeed their children, which would in turn result in healthier babies. 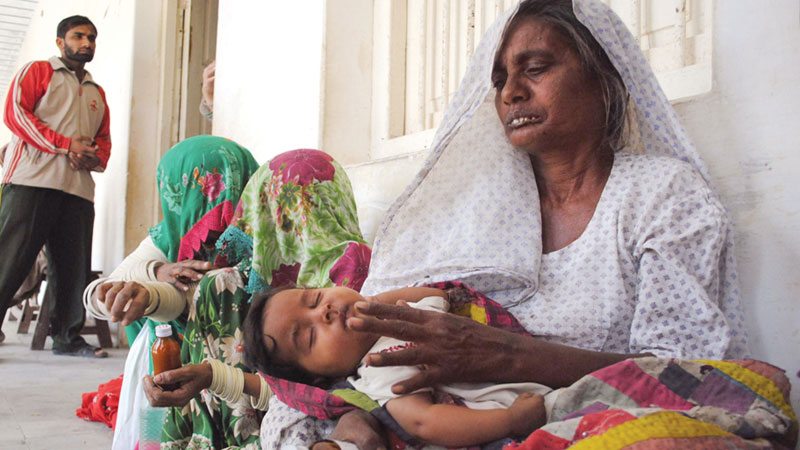 Economic disparities have a major role to play in this problem, as 40 percent of Pakistan’s population lives in multidimensional poverty, that impedes the capability of the population to cater to the challenges of malnutrition. According to Food and Agricultural Organisation, the consumption of fruits, vegetables, fish and meat per capita remains very low in Pakistan compared to other Asian countries, and a major reason for this is their relatively higher price than cereals and pulses.

Diseases associated with imbalanced diet such as diabetes, obesity, and coronary diseases are also on the rise in Pakistan. 10 percent of the Pakistani population suffers from diabetes, 21 percent are overweight, and five percent suffer from obesity. Currently, Pakistan has the sixth largest incidence of diabetes in the world, and it is estimated that by 2020, 13.9 Million Pakistanis would suffer from the disease, taking it to the fourth position globally. Furthermore, Pakistani population has one of the highest risks of coronary heart disease in the world, with 30-40 percent of the deaths attributable to cardiovascular diseases.

Thus it is very important for public health institutions in the country to raise awareness amongst the population about the negative impacts of malnutrition, and the means by which this problem can be overcome.

If Pakistan is to meet Goal 2 of the SDG’s, it has to radically improve the nutritional status of its entire population, and ensure that problems related to both under and over nutrition are addressed.

Most importantly, there is a need to focus on strategic areas such as the maternal and child nutrition, an improvement of which can boost the overall nutritional status of the country. Pakistan is often predicted to become the next Asian tiger, however to achieve economic success, it is important for it to first ensure a healthy and sustainable population.

The writer is a LUMS graduate currently working in the marketing team of Sapphire. He tweets @MAliIlahi