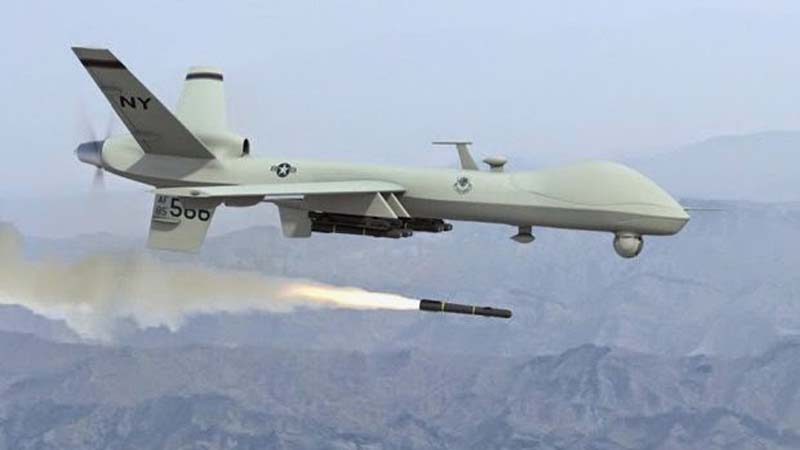 ISLAMABAD: An American spy aircraft rained missiles on a training centre of suicide bombers in Afghanistan’s eastern Kunar province on Wednesday, killing over 20 militants and a teacher, Taliban sources said.

“Militants of the banned Tehrik-e-Taliban Pakistan (TTP) were running the camp in the mountainous Shaltan area of Kunar, bordering Pakistan,” they said.

A Taliban source said US drone fired five missiles on the camp when the bombers were present for routine training. He described the strike as a disastrous for the TTP as the group might have lost some key members.

There were also conflicting reports about the death of Abdullah, son of TTP Chief Fazalullah, but there was no confirmation. A TTP source said Fazalullah was also a frequent visitor of the camp. “Some other TTP senior leaders also live there as they consider this mountainous region safe.”

The TTP chief for Bajaur, Gul Muhammad, was running the camp and earlier reports suggested that he was also present in the area but a Taliban official later denied the report.

Gul Muhammad is the brother of Pakistani Taliban leader Maulvi Faqir Gul Mohammad was arrested in Nangarhar in February 2013. Pakistan had sought his extradition but Kabul had refused his handover.

Some Taliban sources told Daily Times that senior TTP commander Yasin was among those killed. He was teacher of the suicide bombers, according to a Taliban source.

“A majority of TTP militants have sanctuaries there and they use Ghakhi area to enter Bajaur for attacks,” sources added.

An influential Pakistani Taliban leader, Jan Wali, also known as Ahmad Sheena, was killed in the same area on December 27 in a bomb blast. Another TTP Bajaur chief Dadullah was also killed in a US drone strike in August 2012.

It is the second time in less than a month when the TTP militants came under drone strike.

Last month, the TTP confirmed the killing of its deputy chief Khan Said Sajna in a US drone strike in Afghanistan’s Paktika province.

There is a long list of senior militant leaders who have been killed in Afghanistan, almost all by the US spy aircraft or ground operations by the American forces as well as infighting.

Umar Narai, also known as Khalifa Umar Mansoor, who had claimed the 2014 brutal attack on the Army Public School, was also killed in a US drone strike in July 2016.