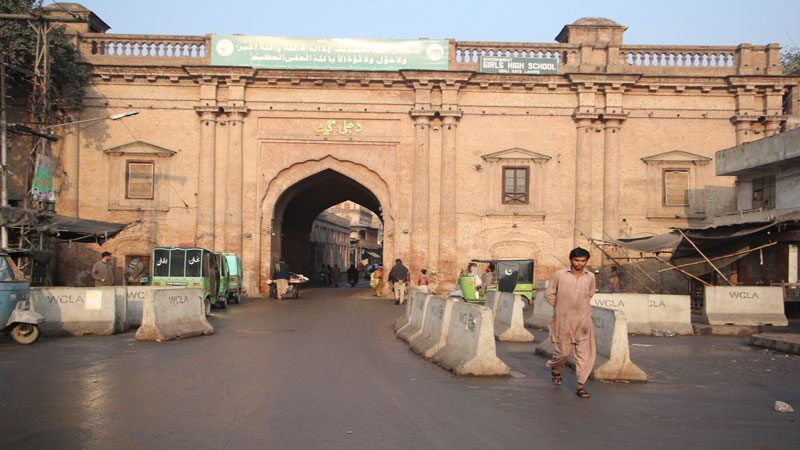 Why did cities have gates in older times? This question is put to me by many people I come across. Personally, I have always been fascinated by these city gates where ever I saw them. You will find gates to the cities in every walled city in the world. City gates were traditionally built to provide a point of controlled access to and departure from a walled city for people, vehicles, goods and animals. City gates were also used for defence, security, health, trade, taxation, and representation, and were correspondingly staffed by military or municipal authorities.

Interestingly, the city gate was commonly used to publicise public information such as announcements, tax and toll schedules, standards of local measures, and messages by the palaces or forts. The public was gathered at a gate and announcements were made there by the courtiers and guards. The gates of a city were heavily fortified, ornamented with shields, sculpture or inscriptions, or used as a location for warning or intimidation. They were also used for displaying the heads of beheaded criminals or public enemies. If we were living in those times, we could have experienced the real sense of a city gate.

Delhi Gate was the most important of all the gates because the Mughals used it while travelling from Delhi to Lahore Fort. That is why the straight passage leading to Lahore Fort from this gate came to be known as ‘Royal Trail’ or Shahi Guzargah. Now imagine the past glory coupled with this gate, the royal guards standing at the gate, Mughal entourages passing through the streets and people leaning over the balconies and jharokas to take a glimpse of their royals, kings and queens and showering flowers

City gates can still be seen in the cities dating back to ancient times to around the 19th century. These gates were closed at sunset and would open at sunrise. With the passage of time, the use of the city gates ended and now they are only present as a symbol of past glory and power and part of heritage. 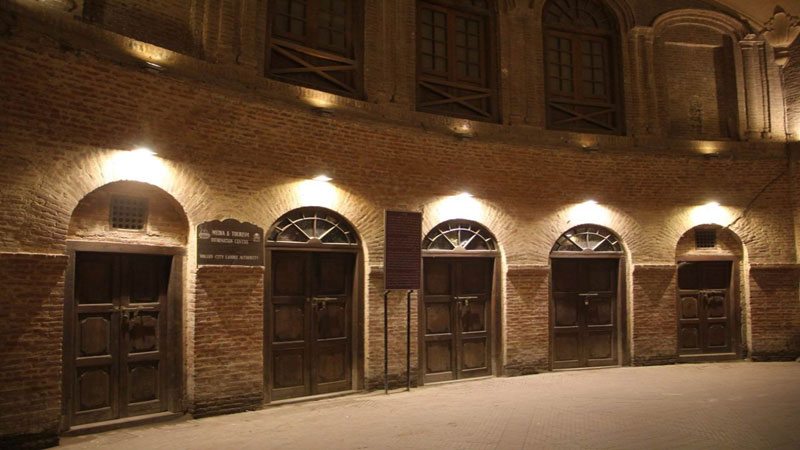 Inside the Delhi Gate

Let me take you to an ages old gate, a symbol of power, in Lahore, which is recently becoming a popular site among the tourists, but few know the history associated with it. This is Delhi Gate or Delhi Darwaza, one of the 13 gates of the ancient Walled City of Lahore. The gate was named so because it faces the city of Delhi. It was built during the reign of Mughal Emperor Akbar in 1600s. Akbar had built thirteen gates around the city connected with a 30 feet high fortified wall. This gate was most important out of all the gates because the Mughals and Royal used it while travelling from Delhi to Lahore Fort. That is why the straight passage leading to Lahore Fort from this gate came to be known as Royal Trail or Shahi Guzargah. Now imagine the past glory coupled with this gate, the royal guards standing at the gate, Mughal entourages passing through the streets and people leaning over the balconies and jharokas to take a glimpse of their royals, kings and queens and showering flowers. What a mesmerising scene it would have been.

If you wish to drive to Delhi Gate, you may take a route from Railway station Lahore, crossing the old Do Moria Bridge (a bridge with two tunnels like openings) and taking a left turn, the signages are there guiding you to this gate. As you arrive at Milad Chowk you will see a huge structure welcoming you into the land of wonders. A city within the city!

The structure of the gate was changed during the British rule in subcontinent. The city gates were pulled down by the British in 1800s and a circular road and a garden were added which we still see today. Later in early 1900s, the gates were rebuilt in the colonial architecture style mixed with Mughal architecture. So this is now a different gate from what Akbar had built. Also the history narrates that the location of the gate was shifted when it was rebuilt. Mughals were particular in symmetry and if we follow the Mughal architecture style the grand Mosque of Wazir Khan would have been visible from the gate but now it’s not like that. With several changes in the cityscape the places shifted and so did the gate. 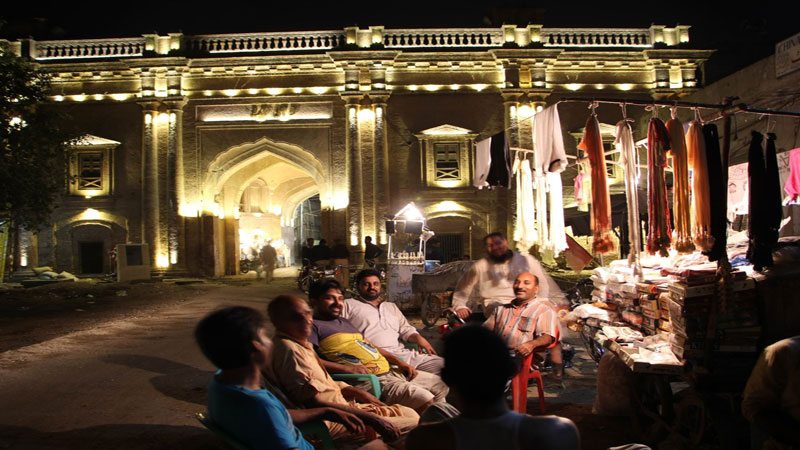 Delhi Gate is a bystander of various ups and downs of the city. It met with the seasons of harmony, tranquility and chaotic turmoil. Where it once was the reception gate to the Royal City but in the Sikh and British rule it functioned as the court of a magistrate, jails, and local police station. It is said by the locals that the gate had wooden doors at one time which were probably destroyed during the independence riots. After 1947, this gate housed a girl’s school which still exists and is attended by the local children.

This gate was conserved in a conservation plan by the Walled City of Lahore Authority in 2015 and has now been illuminated at night for tourists. If you ever plan to visit the place, there is a tourism information centre inside the gate where you can get a hold of a good tourist guide

This gate is huge among the six surviving gates of Lahore. It is a double storey building and almost ten to twelve rooms are serving as class rooms in the upper portion. The most interesting part of the building is the staircase leading to the roof top of the gate. The stairs are built at an angle of 90 degrees and it is difficult to climb them in a speed as one loses the momentum. This was in order to protect the building from sudden attacks and reduce the attackers speed and it shows the cleverness and techniques of defence employed in those days. Going to the upper storey, one can see the roof of the Royal Bath (Shahi Hammam) on the left side. The roof of the gate is even, which gives a spectacular view of the old city and Delhi Gate’s vivacious bazaar. The colors of life are in the air if you ever reach its rooftop. The ground floor of the gate which is the entrance into the Delhi Gate bazaar has six rooms which are now converted into tourism offices and crafts centre. These rooms were used by the chobdars in Mughal era, magistrate and police in later eras. For some time after 1947, the rooms served as dispensary and health centers for the local community.

Now let’s come to something interesting inside the gate. Trust me as you traverse the giant arches of this gate you will be in a world of 17th century. On your left will be the Shahi Hammam or the Royal Bath which is now a popular tourist site and opposite to it starts the Akbari Mandi. This Mandi was the place from where the British East India Company picked up its trade. Going straight on the passage you will have narrow winding streets on both sides. The Gali of Surjan Singh, Well and Haveli of Diwan Dina Nath (Finance Minister of Maharaja Ranjeet Singh), Haveli of Sultan the contractor (builder of Railway Station Lahore), Wazir Khan Mosque, Golden Mosque, Mariam Zamani Mosque, Janam Asthan of Guru Arjun Ram, Haveli of Asif Jah and Lahore Fort will come across your way. What a beautiful heritage trail this is! You will also come across enticing food stalls and interesting people sitting on tharas (platforms built outside houses) inside the streets. The bazaar is not to be missed as you will see everything from clothes to household item on your way, and surely you can shop as these are at subsidised rates. 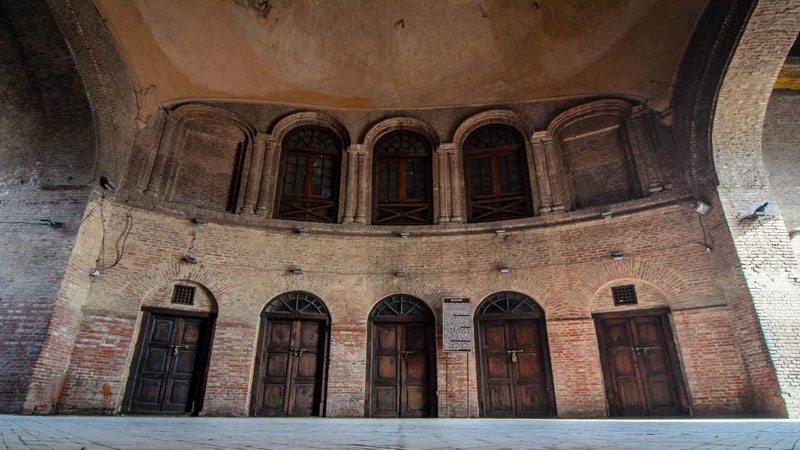 This gate was conserved in a conservation plan by the Walled City of Lahore Authority in 2015 and has now been illuminated at night for the tourists. If you ever plan to visit this place, there is a tourism information center inside the gate and you can get hold of a good tourist guide from there, any time. In my opinion it’s a must visit heritage site in Lahore.