Asma Jahangir fought to defend the fundamental rights of women, religious minorities and labourers in Pakistan for over 50 years, both in and out of the courtroom

Pakistan’s fearless rights campaigner and lawyer, Asma Jahangir, served two terms as Chairperson of the Human Rights Commission of Pakistan and was the first woman president of the Supreme Court Bar Association of Pakistan. She breathed her last in Lahore yesterday. Her funeral will be offered today. I have had many interactions with her and seen her assertive, loud and clear, energetic and determined attitude first-hand. Asma Jahangir always worked with dedication and without fear.

She fought to defend the fundamental rights of women, religious minorities and labourers in Pakistan for over 50 years, both in and out of the courtroom. On the international level, Asma Jahangir had served as UN Special Rapporteur on Extrajudicial, Arbitrary or Summary Executions for the UN Commission on Human Rights (1998-2004) and UN Special Rapporteur on Freedom of Religion or Belief for the UN Human Rights Council (2004-2010). She was a leading figure in the campaign to further reform the Hudood Ordinance, a set of religious laws that, among other things, allowed rape victims to be charged with adultery if they did not have four Muslim male witnesses to the rape. The campaign was partially successful when the 27year old ordinance was reformed in 2006. Asma Jahangir had received the Ramon Magsaysay Award (often described as Asia’s Nobel Prize), the UNIFEM Millennium Peace Prize, the Freedom of Worship Medal, the Hilal-i-Imtiaz (one of the highest civilian awards in Pakistan) and the 2010 UNESCO Bilbao Prize, among others. She was also one of the 1000 women nominated for the Nobel Peace Prize in 2005. For decades, Asma Jahangir remained amongst the strongest voices for democracy and progressive policies in Pakistan. Her career spanned legal representation and reform, as well as writing and advocacy, all for the rights of communities left behind by their governments. Despite death threats and personal attacks, she stood tall for women, minorities and all those without protection.

Asma Jahangir met many of the women who would later become her legal clients, jailed alongside her for protesting the imposition of Islamic laws. Asma was one among the many sufferers of dictatorial regimes, but she never stopped

The iron lady was born in 1952 at Lahore to a father who was a human rights and political activist. As a child, she quickly learned about her country’s limits on basic civil liberties; her father was put under house arrest for criticizing the first Bhutto regime in 1972. At the age of 18 she filed her first petition, which demanded that her father be released from jail after he criticized the country’s war in Bangladesh. In July 1977, General Ziaul Haq took control of Pakistan in a bloodless coup d’etat, beginning a period of martial law that openly violated the basic rights of the country’s citizens. It was in this environment of repression that she came into her own as an activist. To quote her “In our country, where there has been oppression for many years, where there has been military rule, where there have been autocratic civilian rulers, we have to pick up the pieces together. We have to begin to build it in the hope that one day there will be somebody better in the driving seat”. She believed that Pakistan’s Islamisation under General Ziaul Haq was particularly oppressive to the country’s women, which introduced fixed punishments drawn from Quranic sources regarding offenses like theft, drunkenness, adultery and rape. Zia also introduced harsh amendments to Pakistan’s blasphemy laws. As a result of these legal changes, those who spoke out against the government were silenced, women were treated as second-class citizens, and religious minorities were forced to live in fear. In her earliest protests against these ordinances, Asma Jahangir met many of the women who would later become her legal clients, jailed alongside her for protesting the imposition of Islamic laws. Asma was one among the many sufferers of dictatorial regimes, but she never stopped. 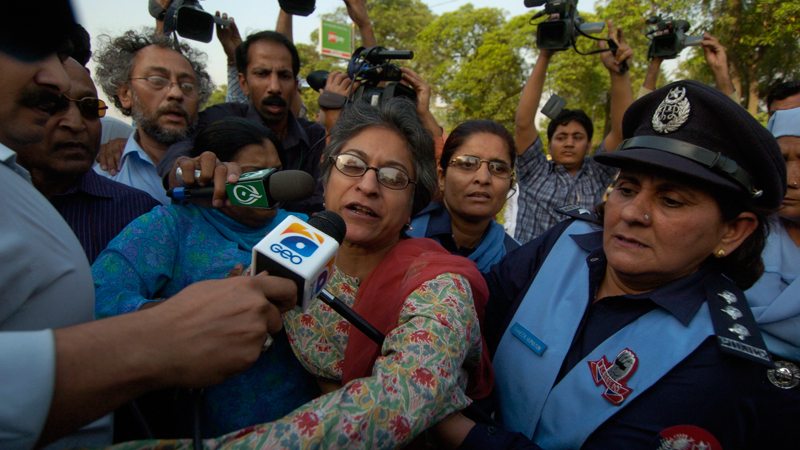 As an attorney, she chose to represent those neglected or persecuted by the Pakistani government, deliberately undertaking high-profile cases that challenged the legislative structure. In one outstanding example, she defended Salamat Masih, a 14-year-old Christian boy accused of scribbling offensive words on the walls of a mosque. In a resounding legal success, she proved that the boy was illiterate and could not be responsible for the graffiti on the mosque. The trumped-up charges against him were thrown out, marking a major victory against Pakistan’s blasphemy law. In order to amplify the impact of their work in the courtroom, she and her sister who is also a legal practitioner, Hina Jilani founded the AGHS Legal Aid Cell, the first all-female law firm in Pakistan in 1980. As a founding member of AGHS, Asma worked tirelessly to change the status quo in Pakistan by defending the rights of women, minorities and children.

In 1987, Asma Jahangir founded the Human Rights Commission of Pakistan (HRCP) to highlight human rights abuses that were occurring throughout the country and conduct public campaigns in favour of human rights norms. On the need for an independent voice on human rights, she once commented that “there was been no change on the ground at all. People are tortured in the same way…but the government of Pakistan is committed to human rights. I wonder whose?” Reflecting on her work, she on so many occasions wished to empower the people who could become masters of their own destinies ‘The way (Pakistan’s situation) will improve is not going to be because of the government or the elite leadership, or the political leadership, or the institutions of our country, most of which have actually crumbled. It will be the people of the country themselves who will bring about the change in society because they have had to struggle to fend for themselves at every level. Public opinion is key to the survival of democracy, to educate people about what democracy is all about’.

Asma Jahangir will be known as much for her writings as much as for her courtroom defence. Her most famous piece “Whither are we?” was published in one of the leading newspapers of Pakistan in 2000. The article gave a scathing report on the withering away of Pakistani civil society. Shortly afterward, she also published a thorough research study on the legal rights of disadvantaged Pakistanis Divine Sanction? The Hudood Ordinance (2003). This book would join her earlier ‘Children of a Lesser God: Child Prisoners of Pakistan’ (1993) as a key text for those seeking to understand the human rights situation in Pakistan.

When General Pervez Musharraf took office as President of Pakistan in 2001, the country saw widespread hope for moderate policies. However, such hopes were quickly dashed as Musharraf proved his animosity toward human rights and accountable governance. In 2005, Asma Jahangir helped organize a mixed-gender marathon in Lahore to protest continued religious violence against female athletes, but was beaten and publicly humiliated by the police for her efforts. Just two years later, Pervez Musharraf placed Asma Jahangir and some 500 other activists under house arrest after imposing a national state of emergency, claiming that opposition activity aimed at reinstating the judges of the Supreme Court of Pakistan was a national threat. She was a fierce defender of democracy, stood for the rule of law and regularly raised concerns on involvement of Pakistan’s military and intelligence services in politics. Her criticism was not limited to the military establishment. She also criticized the higher judiciary for some of its decisions. It is no wonder she was included in the list of 100 most influential women of the world in Time magazine — people like her are not born everyday.

The writer is PhD Political Science and a Civil Servant posted in Islamabad. He can be reached at zafarkhansafdar@yahoo.com and tweets at @zafarkhansafdar