The alarming state of education

Making tall claims and promises is an old custom of our so-called political parties. On the other hand, breaking those promises is another acrimonious reality that we have been witnessing for decades

An education system based on the progressive values and ideals has an intrinsic potential to create better of citizens’ lives in terms of socio-economic conditions. It is an instrumental tool that harvests thoughts, broadens minds, and enriches critical, analytical and logical thinking.

Unfortunately, our prevailing education system is not up-to-date with changing global trends. It has been undergoing surgical inspection since last many decades. We are unable even to diagnose exhaustive syndrome and see where exactly the problem lies. In other ways, perhaps, we deliberately undermine education system to let the nation remain ignorant or illiterate.

The influential section of our society takes necessary perks, privileges, and immunities, for the illiterates are easy to be hoodwinked.

Today, bleak educational picture hovers over the society. Literacy rate has stagnated at 58 percent. More than 22.2 million children are out of school. Drop out ratio instead of declining is rising. According to Pakistan Education Statistics, enrollment rate of secondary level education during 2013-13 was 66 percent and now it has reduced to 63 percent.

Literacy rate has stagnated at 58 percent. More than 22.2 million children are out of school. Instead of declining the drop out ratio is rising. According to Pakistan Education Statistics, in 2013 the enrollment rate of secondary level education was 66 percent and now it has reduced to 63 percent

Making tall claims and promises is an old custom of our so-called political parties. On the other hand, breaking those promises is another acrimonious reality that we have been witnessing since decades.

Amidst all of this, the people are being robbed of their basic needs such as education, health and social protection.

Federal as well as provincial governments made tall claims in their manifestos in 2013 such as declaring education as a national emergency; uniform system of education, increased resource will be allocated for education sector ensuring proper and timely utilization of funds to reach the UNESCO target of 4 percent of GDP by 2018 etc. Only 2.49 percent of GDP has been earmarked in 2017-18 in comparison with 2.09 during FY 2012-13 as education expenditure. 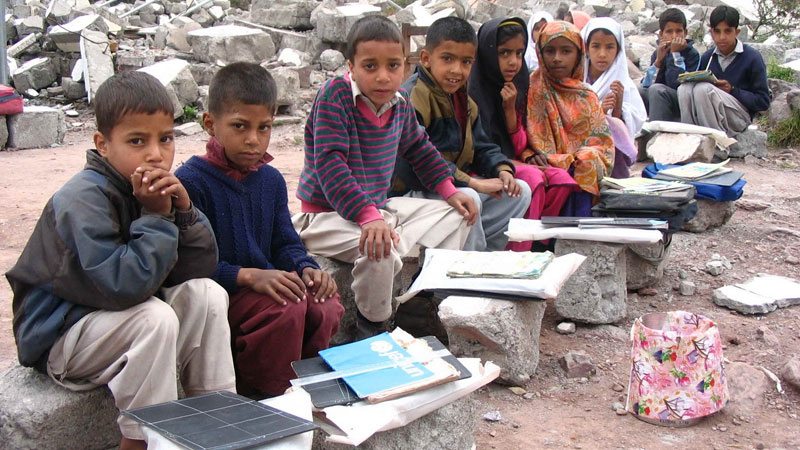 According to AlifAilaan report 2013, in the national education ranking, Sindh stood at 5th with 51.67 of overall education score than other provinces and in 2017 its ranking was at number seven whereas Azad Jammu and Kashmir is at one, Islamabad is at number two, Punjab at number three, KP at five and Balochistan is at six.

The abovementioned facts and figures tell a horrid state of affairs in the country’s educational system, especially in Sindh where instead of students, one may find donkeys and other animals.

Instead of producing scholars, researchers and intellectuals, we are breeding fundamentalism and radicalism in educational institutes. Very little heed towards education is being paid. If we persist on doing this torture to ourselves, how will we ever get rid of increasing mess of poverty and other social ills? Education is one of the basic pillars that make the whole edifice of country’s economy stronger.