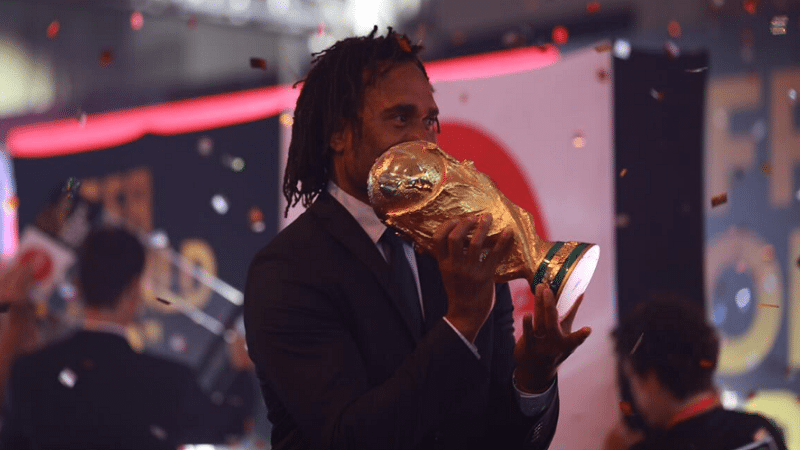 FIFA trophy is currently on a world tour and is expected to pass through 91 cities from 51 countries across the globe. It was unveiled earlier today during the ongoing Coke Festival 2018 at Lake City golf and country club.

Speaking to the media after his arrival in Lahore, France’s Karembeu said that he chose to travel to Pakistan to show the world that football unites people. He further added that although Cricket is the leading sport in the country, FIFA’s trophy tour could shift the country’s attention to football.

Earlier, Pakistan’s legendary cricketer Younus Khan had said that he is proud to be part of the venture and that as a football fan himself, he looks forward to promote the sport in the country.

Here is some of the action from Social Media #FootballWithCocaCola

The Coca-Cola Squad is ready to bring the FIFA Worldcup Trophy to Pakistan in just a few hours! Stay tuned for more updates! #ReadyFor #FootballWithCocaCola pic.twitter.com/fOwsq9tiAW

Pakistan gets to witness the FIFA World Cup trophy.

And finally the moment we’ve all been waiting for! The reveal of the FIFA Worldcup trophy! #ReadyFor #FootballWithCocaCola pic.twitter.com/GC3pGs2gPQ

It sure is a historic moment for Pakistan, specially for those who eat, sleep and breathe football in the country.

And here is Mahira Khan posing with the trophy.

That’s a dream come true for every Pakistani who loves the game. So, the next time FIFA World Cup gold comes to Pakistan, make sure it has our name written on it.