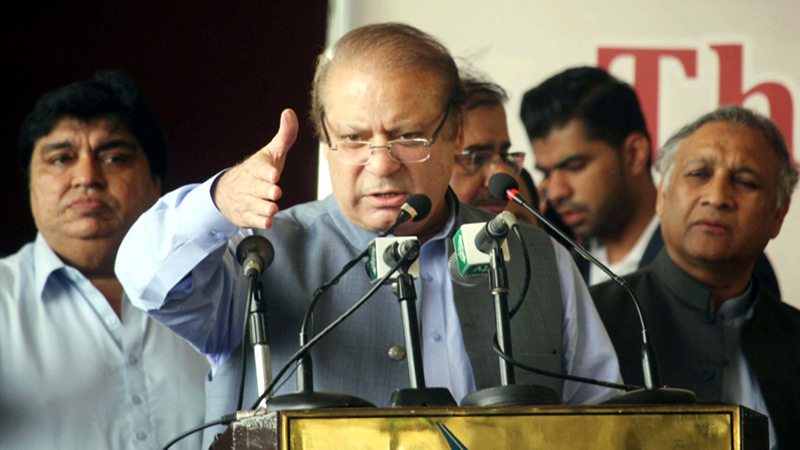 KARACHI: Former prime minister Nawaz Sharif on Friday deplored what he called a nexus between military and judiciary against democracy in the country.

Addressing a seminar titled ‘The Future of Democracy in Pakistan’, the former prime minister said that the courts validated martial laws in the country on the basis of the ‘doctrine of necessity’, adding that a section of the judiciary had always supported dictators.

Nawaz said that every time democracy starts strengthening, factions of judiciary or army try to wreck it. “Every now and then when the elected political representatives try to ensure democracy sustains in the country, there are a few biased individuals in the institutions which try to deteriorate that process. Every time we looked for support from judiciary, it supported dictatorship instead, leaving us weaker,” he maintained. “For over 30 years, Pakistan has been ruled by dictators. In 70 years of its existence, not even one prime minister has been allowed to finish his tenure.”

The former prime minister said the ‘law of necessity’ and the ‘Provisional Constitutional Order (PCO)’ inflicted immense damages to the democratic process and did not let it take roots in the country. He questioned courts for not bringing former military dictator Gen (r) Pervez Musharaf to justice in the treason case. “The court, which is powerful against politicians, is helpless before dictators,” he said. “Politicians have been hanged, they have been called hijackers but those who trampled upon the constitution did not face any ire,” he added.

The former premier said that despite all attacks against democracy by dictators, no one could bury it as the masses are aware of their rights now. “All sections of society should play their role for the prosperity of democracy. Lawyers, teachers, media, all have to become soldiers of democracy without any bias,” he said. “We have to take strict decisions to take this country on the right path,” he added.

The former prime minister said political scenario was not completely clear anymore. “Even after 70 years, why such seminars are needed?” he questioned.

“I agree with Mahmood Khan Achakzai on PCO judges. These PCO judges are the reason for destruction of Pakistan,” he said.

“Previous government was the first to complete its tenure and we all are well aware of the fact how our tenure was tested every now and then. Everyone knows how I was disqualified, how Balochistan’s government was removed. This is highly unfair,” Nawaz lamented.

“Isn’t it highly unfair that when the judiciary has to face dictatorship they always surrender? Benazir Bhutto and I signed the Charter of Democracy in 2006 with all parties to outline steps to end military rule established in the country after 1999 coup by Pervez Musharraf and restore civilian democratic rule. It didn’t make a huge difference because we are still being targeted . but it is highly important,” he added.

Nawaz maintained that the judiciary had no right to insult others, adding that the court used words like ‘Sicillian mafia’ and ‘godfather’ for him which is totally unacceptable. “There must be a care about self-respect of others,” he argued.

Nawaz Sharif recalled the movement launched by lawyers for the restoration of honorable judges. “Movement for restoration of judges wasn’t limited to a few judges. We succeeded in restoring the judges … but not the justice,” he deplored.

He declared that 293,216 cases had been pending in high courts and another 38,945 cases in Supreme Court for hearing until November 2017. “Now, a movement will be started to restore provision of justice.”

Nawaz maintained that the institution of the prime minister had been left paralyzed. “Can the system work properly if one institution weakens the other?” he asked.

“I request media, all activists to fight for democracy … my heart guarantees and warrants that we have realised how crucial democracy is. We have to make a collective effort and I stand with the nation,” Nawaz said. “Even after these unfortunate incidents, I still stand hopeful that Pakistan will shine. Democracy is always going to fight back. The nation understands the sanctity of vote and that will help us move forward,” he concluded.