The recent political timeline of Pakistan has witnessed massive upheavals. The root of the crisis lies in the tussle between civilian governments and the military rulers. The two main forces have never settled in harmony with each other ever since Pakistan came into existence.

The current feud between the military establishment and the ousted Prime Minister Nawaz Sharif — Being the 18th prime minister who failed to complete official tenure in the office — is symptomatic of the same civil-military rift. Nawaz Sharif has been constantly denying the allegations of corruption and persists on blaming certain invisible forces for his removal from the office. While the civil-military relations in the country remain hereditarily strained, it’s also a fact that political parties — be it PML-N or PTI — largely rely on the support from military establishment during the elections.

The upcoming 2018 elections in Pakistan are characterised by extreme political risk. The chaos ensuing since 2013 has led to a significant policy struggle between the government of Nawaz Sharif and military.

While civil-military relations in the country remain hereditarily strained, it’s also a fact that all political parties — be it the PML-N or PTI — largely rely on support from the military establishment during elections

The major contention between military and Nawaz Sharif has been on the question of who will make policy on India.  The civilian government — against the will of military establishment — has always wished to improve its relations with India.

Another struggle between the both is centered on the PML-N’s falling-out with PTI in the negotiations over military operations against the militants in North Waziristan.

The army, on the contrary, has always opposed the idea; and has been coaxing PTI into protesting against the government. The 2014 anti-government protests led by PTI were heavily backed by ISI. Different external risk factors add to the growing political turmoil in the country. The removal of Nawaz Sharif from the office has sabotaged the negotiations with Indian government over Kashmir dispute, trade ties and other cross-border issues. 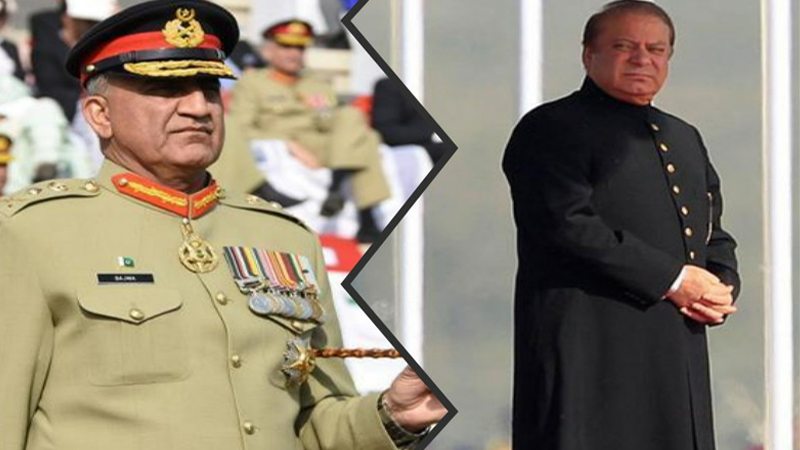 The regional outlook of the country is getting bleak with military fears becoming intensified after the formulation of alliance between India, US and Afghanistan. This maneuver has fostered the relationship between Pakistan and China, calling the top military personnel to join hands with Russia as a major military supplier. It is adding to the nuclear threat in the region, and is expected to trigger a nuclear war, and intensify political chaos.

Besides, the internal risk factors have also fundamentally affected the political scenario of the country. The military has been successful in controlling the attacks by the militants in FATA region ever since operations of 2014, which has reduced their ammunitions and supplies from the FATA region. This has resulted in lesser support from the key tribes of FATA, hence curbing the terrorist attacks.  However, it has been noted by different investigation agencies that the military has merely been trying to improve its image about its capabilities to its global partners by its diplomatic approach of silencing the militants till the upcoming elections of 2018. Any on-start of an attack by the militants might again pose a major threat to the military in the future, which can again add to the political crisis of the country.

The afore-mentioned factors explain the ongoing political chaos in the country, which require an actionable strategy by the coalition of different political parties, resolution of conflicts and differences.