Int’l Conference held in Hyderabad to preserve heritage of Sindh 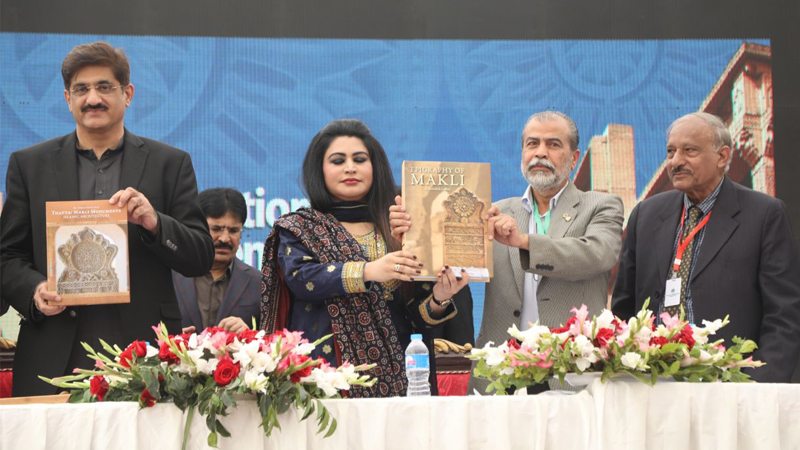 The two-day conference was hosted by Culture, Tourism and Antiquities Department in collaboration with Endowment Fund Trust for the Preservation of the Heritage of Sindh.

Chief Minister Sindh, Syed Murad Ali Shah, the guest of honor at the conference said that, whatever comes out from such international conference being organized by the culture department they will adopt each and every single recommendation and suggestion to make it more beneficial for the general public along with the global approach and implement their all required framework.

During his speech he said that, Makli is not just a graveyard, these all are the hundreds and thousands stories which have been buried in makli necropolis, and these are not graves and will try to equate them to the world.

He assured that all the problems be solved and risks associated with Makli graveyard would also be addressed.

Chief Mister Sindh Syed Murad Ali Shah said that he is thankful to Sindh Minster for Culture, Tourism and Antiquities Syed Sardar Ali Shah for inviting him on such a great historical event and he also congratulated him and his team for organizing successful first International Conference on historical Makli Necropolis.

He emphasized upon the people particularly local residents of Thatta to extend their support and cooperation with the experts and concerned department for the projection and conservation of Makli graveyard.

Speaking in the conference in welcome speech, Minister Culture, Tourism and Antiquates Department, Syed Sardar Ali Shah said that, he takes part in representing the civilization of this part of the world, from Moen Jo Daro to the lakheen-jo-daro, the Indus valley civilization, to its exceptional archaeological and architectural history from Aamri to Kotdiji, from ran -kachh to ranikot and many other historical heritages sites of Indus valley.

While sharing the experience of the planning he said that, “I assure you that the momentum that was created in safeguarding our heritage sites will continue with the same passion and enthusiasm, for makli we will be continuing our efforts and energies for implementing the remaining recommendations to restore is outstanding universal sites”.

Senator Sassui Palijo said in her speech that after the 18th amendment, several departments transferred to the provinces and Sindh province got 29 Museums and so many historic places.

She said Sindh government has been improving the condition of all historical places including Makli site from its available resources.

She further added that organizing first ever International conference on Makli is a positive step and the great achievement of Sindh Culture, Tourism and Antiquities department.

Abdul Hameed Akhund, Secretary Endowment Fund Trust for the preservation of the heritage of Sindh said that , origins of Thatta as that of Makli are not only distinct but its history can be traced back to the 2nd quarter of the 14th century. “The foundation of Thatta is attributed by our historians to the beginning of Samma rule, originally close to the bank of the channel of the Indus”. He said.

He added that, Makli is not a necropolis, its alive, its vibrant it pulsates and is exuberant, it is the history of Sindh, a tale of intrigue and betrayal of Sindh of Sindh, a narrative of love for this enchanted soil of peace and tranquility.

Various other sessions were scheduled for both days, and 19 research papers were also to be presented which were connected with the archaeological aspects and heritage management perspective in conference.

On 1st day a session were conducted by renowned national and international scholars on the role of archaeological education in makli, cultural landscape of makli based on survey of ancient settlement sites in lower Sindh, the anthropological study of relationship study of relationship between Iran and Sindh based on most frequent themes of Makli graveyard, an international perspective on recent tangible and intangible conservation efforts at Makli, history, origin and development of canopy architecture in Thatta and an epigraphic odyssey of Makli.

At the end of the first day, a documentary film made by renowned senior journalist Wasatullah Khan on Makli Hills and a stage drama performed on the story of “Noori Jam Tamachi” were presented.

On the 2nd day of conference they featured two sessions in which they touched each and every aspect and role of heritage in communities.

And in the end of 2nd day a musical program were designed and sufi singers of Sindh performed.

1st women architect Yasmeen Lari were rewarded by the honor of “Tamgha-I-Imtiaz” for her artistic and field concerned contributory efforts in 2006 by Culture Department.

Talking to the Daily Times, Zain Mustafa, researcher and explorer of heritage architecture said that, on such international conferences concerned field experts should have to call archaeological students as they can acknowledge and aware from the scientific and technical approach of such heritage sites and its preservation and conservation.