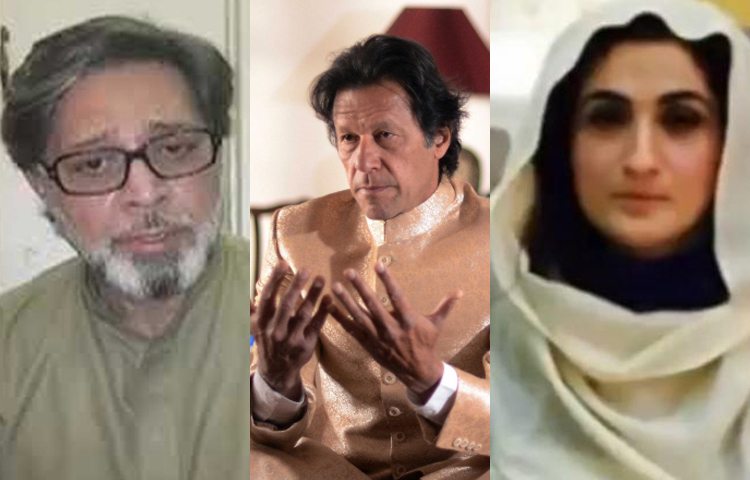 Khawar Farid Maneka is a Customs officer who has recently come into the eye of the public as his ex-wife Bushra Riaz Wattoo was linked with Pakistan Tehreek-e-Insaf (PTI) chairman Imran Khan. Media reports claimed that the two have recently tied the knot. Although there hasn’t been a confirmation as yet from any of the sides, Imran Khan has officially told that he has only proposed Bushra for a marriage and she hasn’t yet given her approval.

So who is Khawar Farid Maneka and how did he and his wife get so close with Imran Khan?

In a recent column, renowned analyst and anchorperson Javed Chaudhry shared some details about the family.

According to him, Maneka is a senior official of Customs department, belonging to Pakpattan and is a spiritual devotee of the 13th century mystic Baba Farid Ganj Shakkar. Khawar’s father Ghulam Muhammad Maneka was a politician and also served as a federal minister under Benazir Bhutto. Ghulam Muhammad Maneka passed away in 2011.

Khawar’s brother Ahmad Raza Maneka had also contested an election in 2013 on PTI ticket from NA-165 but lost to PML-N’s Syed Athar Hussain Shah Gillani. Khawar Maneka is an ex-Aitchisonian and has also studied in the United States, where he was considered one of the rich students from Pakistan. After returning to Pakistan, he attempted CSS exam and joined Customs department. Currently, he is an officer in Grade-21.

He was married to Burshra Riaz of the Wattoo clan. Bushra is originally from Dipalpur and the couple had three daughters and two sons. Two of the daughters are already married and one of them is the daughter-in-law of Punjab’s provincial minister Atta Muhammad Maneka. Ibrahim Maneka and Musa Maneka have also studied abroad.

However, the two things most interesting about Khawar Maneka are that, one, his reputation in Customs department wasn’t good, and, secondly, he has been into Sufism and mysticism from quite a young age. He remained posted in Lahore, Islamabad, Sialkot, Multan and Karachi but couldn’t stay at any of the posts for a long period since wherever he went, he was accused by his subordinates of being corrupt and ‘taking more than his due share’ from the gifts and ‘speed money’.

He was also infamous for demanding gifts from people. The best post he enjoyed in his career was as Director General (DG) of Transit Trade but he was removed from this position as well due to his poor repute. He couldn’t even be promoted in the 2015 promotion board either.

However, when the current Prime Minister Shahid Khaqan Abbasi promoted all the officers on Supreme Court’s order, Khawar Maneka also got the promotion.

Sufism is the other aspect of his personality. He has been very spiritual over the years. Bushra Maneka was also a modern woman in her youth but she also gradually turned to Sufism, and got famous as ‘Pinky Peerni’. The husband and wife would travel from Lahore to Pakpattan by foot every year on the 5th of Muharram.

Imran Khan was first introduced to this family by Aun Chaudhry. He got extremely impressed by ‘Pinki’ in this brief meeting and started visiting the family quite often. Bushra often told Imran Khan verses to recite and also gave him a ring to wear for good fortune.

After their introduction to Imran Khan, the couple gradually started developing differences, which Khawar believes to have been Godsend. There were reports of Imran Khan’s marriage with Bushra’s sister Maryam as well but the rumours were denied from both sides.

As Bushra and Khawar developed more and more differences, Bushra finally got divorced from Khawar Maneka. There are contradictory reports on how this divorce actually came by but since Khawar has already denied having any differences with Bushra and stated that the reasons of the divorce were spiritual, it gives credence to the report that Bushra one day told Khawar that she had had a dream in which Prophet Muhammad (PBUH) appeared before her and told her to get married to Imran Khan, which would not only remove all the hurdles in Imran Khan’s way to become PM but will also eventually usher in a golden era for Pakistan.

Whatever the truth, Bushra and Khawar divorced and though Imran still denies having married Bushra, reports claim that the two have already tied the knot on January 1 and are now waiting for a spiritual moment to announce their marriage.

It has also been reported that the family kept looking for a proper match to Imran Khan but failed to do so. The reports even claim that Imran Khan had divorced his ex-wife Reham Khan too over Bushra’s advice.