Palestinians in the Indo-Pak crossfire

The fallout of this latest diplomatic brouhaha, which saw the Palestinian ambassador share a stage with Hafiz Saeed was: a disgruntled India, an unhappy Pakistan and a bewildered Ramallah

The Palestinian Authority rang in the New Year by recalling its ambassador to Pakistan. The unfortunate incident came when the latter had attended a rally supporting the Palestinian position on Jerusalem as the new home for the American embassy. For the host was none other than Hafiz Saeed. It has been said that the swift action against the diplomat came in the wake of Indian objections which contended that it was “unacceptable” that the latter had shared the stage with the purported mastermind of the Mumbai attacks.

Inevitably, what followed was the demarcation of battle lines on Indian and Pakistani social media. Yet surprisingly the two sides did not direct their ire towards each other. Rather, a third party was soon cast in the role of fall guy: the Palestinians. Allow me to paraphrase, with a sprinkle of hyperbolism for added good measure, what Indian nationalists had said about the whole affair. In short, they harangued the Palestinian people for effectively failing to acknowledge the tragedy that shook the entire country to the core back in 2008. And while an infuriated Indian media that is known for its veering towards sensationalism was busy throwing shade at the PA for seemingly prioritising Islamabad over New Delhi — over here on this side of the border the atmosphere was equally tense.

The relationship between Pakistan and the Palestinian has been on a fairly even keel for the last 70 years. Indeed, the people and governments of this country have been predominantly pro-Palestinian; with the country’s representatives not thinking twice before taking to the world body to vote for resolutions against the ongoing military occupation. 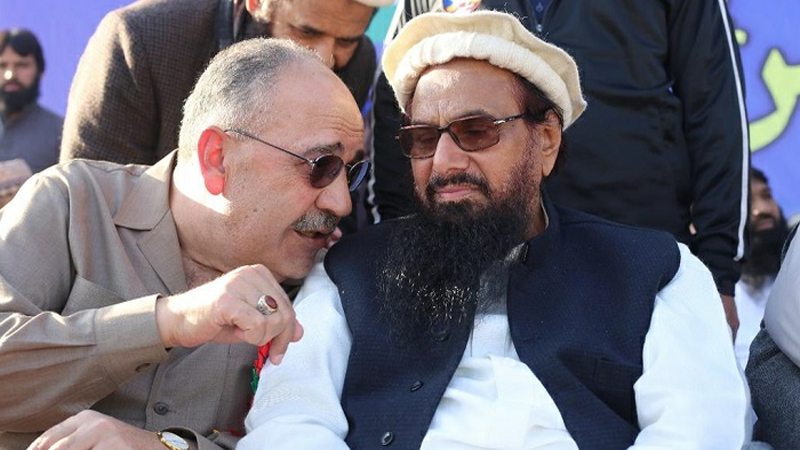 Nevertheless, it would still be an exaggeration to say that the friendship enjoyed by both sides has always run smoothly. After all, there was the question of Pakistan’s participation in a military offensive that became known as “Black September. This involved Gen Zia training the Jordanian side, reportedly on the implicit orders of King Hussein, in his offensive against Yasir Arafat’s Palestinian Liberation Organisation; which lasted from the end of 1970 through to the following summer. Thus was Pakistan complicit in not only killing thousands of Palestinians — it also shares responsibility for seeing the latter’s expulsion from Jordan.

Thus is may not be too far-fetched to suggest that in light of the Palestinians’ apparent kowtowing to Indian diktats the wounds that we dealt them are still rather raw. This might come as a shock to younger generations of Pakistanis who have little or no knowledge of the entire debacle. And it also explains why we saw our nationalists hesitate not in unleashing verbal attacks on Palestinian Arabs over their complying with Indian wishes.

Meaning feelings of being verily snubbed so publicly blinded our collective conscience; while also distorting our understanding of the Palestinian cause itself. For within a matter of minutes Pakistanis began accusing Ramallah of treachery while threatening to recognise Israel’s sovereignty — complete with current borders — as the cruellest form of retaliation against the PA and its strongly worded letter of diplomatic discharge.

The fallout of all this was: a disgruntled India, an unhappy Pakistan and a bewildered Palestine. This much was apparent from the hastily written aforementioned note of dismissal; which verged on the incoherent, at places. The gist of which was that the PA reassured New Delhi on multiple occasions that it wholeheartedly supported the latter’s ‘fight against terrorism’. Thus for much of the citizenry here this spelled the end of a long lasting friendship. Even though the letter shows Ramallah ‘begging’ for Indian forgiveness — as opposed to condemning Pakistan. Which in itself ought to signify the overt desperation and fearfulness suffered by the Palestinian people when it comes to keeping a hold of global support for the right to statehood. After all, these are a people who have been left to safeguard what is now nothing more than fragments of their homeland from aggressive Israeli military occupation. Given these circumstances, therefore, we can perhaps understand how just the smallest moves towards recognition of a Palestinian state is sufficient to prevent them from losing a collective identity.

Although India was among the 128 nations that rejected President Trump’s more or less de facto (unilateral) recognition of Jerusalem as the Israeli capital — New Delhi and the Jewish state have been supporting each other, both directly and otherwise, since the 1950s. Indeed, there have long been rumours of Tel Aviv providing India with military aid in the Indo-Pak war of 1971.

Nevertheless, Pakistanis should be sufficiently mature to understand that the response to Indian demands in this latest diplomatic brouhaha came from a position of weakness. Meaning that it was issued by a ‘de facto’ government of an occupied territory; a leadership that is not permitted by the international community to affect either its own self-determination or weigh in on global affairs. And then there is the role of the president, which is purely ceremonial.

All of which renders the PA extra cautious when accepting or rejecting diplomatic gestures; even if its ultimate decision ends up causing upset to some allies. After all, if Ramallah had ignored New Delhi’s objection — Israel would simply have tightened the noose around it. For every move, every misstep is quietly observed with untold repercussions always in the offing. Thus Pakistan, this time, needs to check its privilege given that, as sovereign nation, it cannot even begin to understand the Palestinian struggle for statehood.

Israel, for its part, has showed little if any resentment over the Indian vote at the General Assembly. Presumably this is because it knows that any resolutions on Palestine are mostly symbolic. This is something that New Delhi understands; and somewhere deep down so do we. That the Jewish state grabbed large chunks of Arab land right under the UN’s nose while incurring little or no stricture tells us all we need to know about the nature of its existence; not to mention its crippling sanctions on the Palestinians. Be that as it may, Pakistanis nonetheless enjoy questioning how India — the flag bearer of Kashmir occupation — mustered the courage to reject the Trump decision to effectively pull the plug on the two-state solution. In reality, of course, many of us are aware the Israel fuels the ongoing atrocities in occupied Kashmir. And in any case, the two sides are deeply allied, including militarily. Thus one single ‘no’ vote will not be enough to sever ties that have been so strongly forged over the decades.

Nevertheless, something about the New Delhi vote — which unanimously declared the Trump move ‘null and void’ — has piqued my interest. Could it be that the Indians were being mindful of its largest minority group at home: namely, the Muslims? Yet given recent events in that country such as the spike in attacks against Muslim populations at the hands of right-wing Hindu groups suggests prevailing objections to faiths outside Hinduism.

Thus in this context any pro-Palestinian sentiment among India’s Muslim population will likely not even register on the Modi radar. Or maybe the vote may be explained as simply as India not wishing to be the odd one out at the world body. It is quite likely that had the majority supported Trump — New Delhi would have been right there beside them. Sadly, what started out as a goodwill gesture, affording some respite at least to the Palestinians, soon gave way to emotional blackmail and open threats.

Thus did we see the Indians continue to lambast the PA even after its Foreign Office issued as written apology on behalf of its disgraced ambassador. Yet even this was not sufficient for New Delhi, which took to lamenting how it had sided with the Arab state despite enjoying more than cordial ties with Israel. One tweet went as far as terming the vote a ‘diplomatic mistake’. But never to be outdone by their arch-rival — Pakistanis went one step further, calling on Islamabad to cut all ties with the PA.

And then came the cruellest of all blows: threatening to pledge allegiance to Israel. Those in favour comprised two distinct groups: ordinary citizens and political experts. And all the while both kept on reminding the Palestinian people how this country had supported them all the way. Whereas in reality all we have done is formally endorse the two-state solution; at least on paper. Though even here, this usually does not go beyond pro-Palestinian rallies, sometimes nationwide. And for this we expect gratitude.

It seems that our emotions sometimes radiate our innermost cravings. And this is exactly what I saw on Pakistan’s social media feeds. In other words, to offset their disappointment with the PA — the people of this country swiftly jumped ship. A misguided response that raises serious questions about our call for an independent Kashmir; given that we are apparently willing to accept one form of brutality while standing defiantly against another. All in the national interest, of course. And just as in ‘our’ disputed territory, where bodies of young men literally litter the streets; so, too, in Palestine has the land been transformed into an open air prison where men and women are detained and effectively experimented upon.

The sense of confusion that the letter of diplomatic discharge has unveiled shows a Palestine so fixated on the occupation that it pays little heed to issues existing outside its boundaries. And while many of those beyond South Asia are familiar with the ongoing Indo-Pak conflict that simmers below the surface — we should refrain from punishing those states that may not have as deep an understanding of the issue as we would like.

We, the entire, world must remain mindful of the fact that when a people breathe the air of apartheid day in and day out they, admittedly, attract international sympathy; indeed their resistance is praised and, at times, glorified. Yet ultimately, victory rests forever with the oppressor. Indeed, I would even go as far as saying that our empathy for the tormented conceals a hidden admiration for the tormentor. This may even explain the primary reason behind the Arab world’s pivot towards Israel in recent years. And if we are honest with ourselves, such dynamics may also have had us fascinated, which was manifested in our vitriolic social media outburst.

In short, it is easy to intimidate the subjugated simply because their safety, strength and security are compromised. Pakistan should therefore be mindful that any support for the Palestinians must be unconditional. And then we must also understand that we do not have the right to have expectations from people living under siege. The best we can hope for is genuine appreciation. And not that which has been forcibly extracted.

The writer is a student of political science and history; focused on the Middle-East and South Asia