‘Parchi’ represents cinema at its worst

Like other films in the ‘Mummy Daddy Burger Film’ genre, the movie also does not consider originality and innovation to be a virtue; it does not have a single original thought or idea and borrows freely from more than 20 films 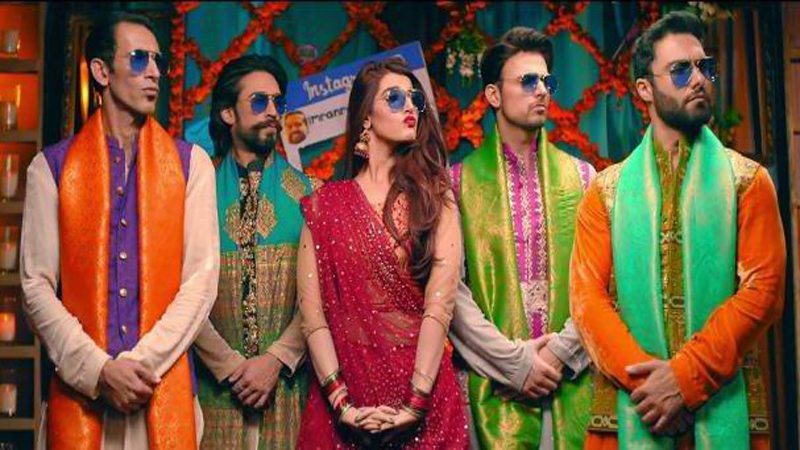 Parchi is a landmark film. The film establishes a new genre – the “Mummy Daddy Burger Film” – in the world of cinema. Slackistan, Siyaah, Gol Chakkar and Jalaibee were precursors to what is now a genre of its own, thanks to Parchi. Films of the genre are usually made by young men, mostly from Islamabad, who have access to Arri Alexa, Blackmagic URSA and other fancy 4K cameras. They have watched the films of Anurag Kashyap, Quentin Tarantino and Tom Ford. They have reviewed a few online filmmaking tutorials. Their worldview is shaped by social media posts, random stoned thoughts and convoluted drunken conversations. Surrounded by sycophants and living off of their parents’ money, they believe that they need to make films because they have the basic wherewithal to do so. They solemnly believe that they are destined to be great filmmakers not only because of their fancy equipment, film watching history, online education, radical thoughts and irrepressible intelligence but also because they refer to each other by using really cool nicknames. That they don’t use their Pakistani names and are known by cool names such as Joey, Sal, Flo and Big is a guarantee that any and everything they do will be cool. Therefore, they do not worry about what they believe is trivial – talent, skill, ability, merit, innovation, intellect, intelligence and originality.

Parchi, like other films of the “Mummy Daddy Burger Film” genre does not consider originality and innovation to be a virtue. The film does not have a single original thought or idea. It borrows freely from more than 20 films – A Simple Plan, Bottle Rock, Drive, Fargo, Fukrey, Fukrey Returns, the Gangs of Wasseypur series, the Gol Maal series, the Ice Harvest, Jackie Brown, Kill Bill Volume 1, Kill Bill Volume 2, Knockaround Guys, Money for Nothing, Premium Rush, Reservoir Dogs, Rififi, That Girl in Yellow Boots, U-Turn, Way of the Gun, What’s Up, Doc? and quite a few others – and utterly and totally ruins each and every scene, idea and sequence that it so cavalierly lifts. The result is a crude, friable mash-up of cinematic loot, put together in what has had to have been drunken stupor.

Parchi is an abomination and a disgrace. Painful to watch and a veritable showcase of incompetence, idiocy and nescience, it represents cinema at its worst. It is an insult to the intelligence of audiences, a mockery of any natural gifts that the filmmakers were born with and an embarrassment for Pakistan’s fledgling film industry.

Parchi tells the story of four friends: Bash (Ali Rehman Khan), Bilal (Usman Mukhtar), Saqlain (Ahmed Ali Akbar) and Bhola (Shafqat Khan) who live together and lead failed lives. They find themselves in hot water when Bash ends up owing five million rupees to gangster Zodiac (Shafqat Cheema). They enlist the help of female gangster Eman (Hareem Farooq), also known as Madam Sahib who has no backing but does not get killed because she walks around the crime infested city, protected by two bodyguards and uses slapping as her weapon of choice. She also grinds her teeth in a crooked manner to instill fear and to communicate each and every emotion required of her. A lot of gratuitous slayings, meaningless chase sequences, inane jokes and trite dialogs later, the cast and crew end up where expected, leaving filmgoers bored, baffled and confused. Every person in the cast of Parchi wants to be a comedian and delivers flat one-liners with the pride and confidence of a master thespian. Their synthetic enthusiasm is outdone only by the cast’s unequivocally bad acting, eliciting pity rather than laughter from intelligent viewers.

Painful to watch and a veritable showcase of incompetence, idiocy and nescience, Parchi represents cinema at its worst. It is an insult to the intelligence of audience, a mockery of any natural gifts that the filmmakers were born with and an embarrassment for Pakistan’s fledgling film industry

Each one of the three songs of Parchi is awful but the item song, ‘Billo Hai’, is truly cringe worthy. Out of place, the awkward and stilted dance number neither titillates nor entertains. However, it does show that Farooq has two left feet and the filmmakers despite all the talk of Parchi being a film with a strong female lead, have no qualms exploiting the female body for cheap thrills. The defense that similar dances are the norm in Pakistani weddings is flawed because it does not take into account the causal relationship between what people see on the screen and what they do in their real lives. ‘Billo Hai’ is particularly distasteful and vulgar. Parchi, of course, has no interest in being tasteful or even politically correct. It casually uses blindness, poverty, obesity and much else in its failed attempts at humor. The dialog is full of expletives that are as offensive as they are redundant. And the plot, characters and narrative are simultaneously offensive, repugnant and crude.

The performances of all actors in Parchi with the exception of Mojiz Hasan, Faizan Sheikh and possibly, Ali Rehman Khan, are decidedly ho-hum. Some actors try harder than others but bound by the limitations of the script and their own histrionic talent, fail to deliver.

The only actor of Parchi with a sprinkling of stardust, Ali Rehman Khan, looks good. He dances passably and performs adequately. In a better film, Khan’s portrayal of Bash would have been a star turn but in Parchi his is lost amongst a plethora of bland performances. 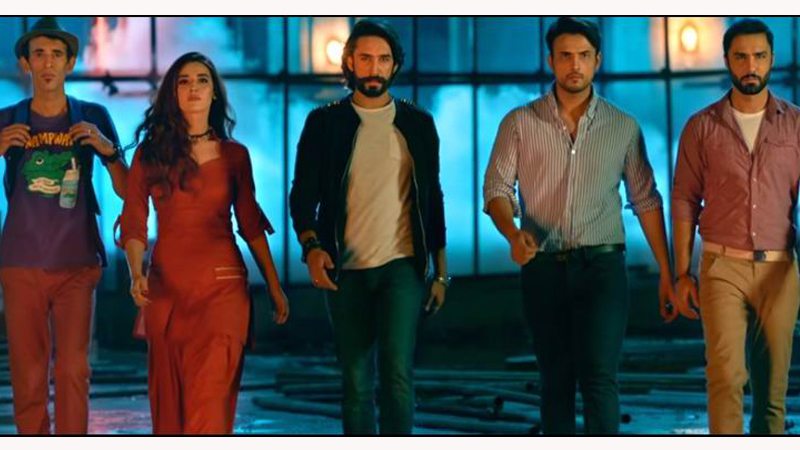 An otherwise capable actor, Ahmed Ali fails to impress in Parchi. He tries – very visibly and perhaps, commendably – to do more than the under-written character of Saqlain allows. Sadly, he fails. Ali approaches each scene anew, albeit with studied vigour and thought and in doing so forgoes plausibility, continuity and consistency of character. Experienced actors know that digging deep to find something raw and natural, while admirable, is futile in a vehicle as hackneyed as Parchi. Ali does not seem to understand the craft of acting: doing more is trying too hard and a virtual guarantee of overacting.

Usman Mukhtar lacks screen presence, star quality and acting talent, in addition of course, to good hair. He either wears a bad wig or sports a horrible haircut in Parchi. His voice lacks throw, emotion and gravity. His vapid dialogue delivery, coupled with a mostly blank look, renders lines which are insipid in the first place, totally lifeless. Mukhtar who is also the cinematographer of Parchi should know that the ARRI Alexa Mini catches a lot of detail, including sweat marks and stained teeth. An investment in an antiperspirant and whitening toothpaste would serve the very earnest, aspiring actor well.

Hareem Farooq, who is also a co-producer of Parchi delivers the worst performance in the movie. She has little desire to embody the persona of Madam Sahib and is singularly focused on proving, mostly to herself that she is hot and sexy. She is not. If only dressing up in skimpy clothes, making entries in slow motion, using awkward shooting angles and delivering corny lines made one sensual. The implausibility of the script together with Farooq’s total lack of histrionic skill added to her overriding desire to be a strong, willful vixen making her performance, at once, comical and pathetic. Her Madam Saab is not the sultry, voluptuous ogress she wishes it to be but a tired, old harridan trying a little too desperately to be someone that she can never be. Her desperation to appear seductive, strong and amorous are embarrassing to watch and a lesson for producers not to use their influence to indulge their vanity and expand their roles.

One redeeming feature of Parchi is Mojiz Hassan’s performance as Virgo, the sidekick of Zodiac. The young actor has great comedic talent that he uses to make even the tritest of lines sparkle. He has great timing, a funny persona and a remarkable ability to fully inhabit the character he plays. A truly promising actor, Hassan deserved a better role and much better lines than he was given. That he managed to make the two work is a testament to his resourcefulness as an actor and a sad reminder that Pakistani cinema is unable to properly employ and exploit the skills of the country’s many talented actors. 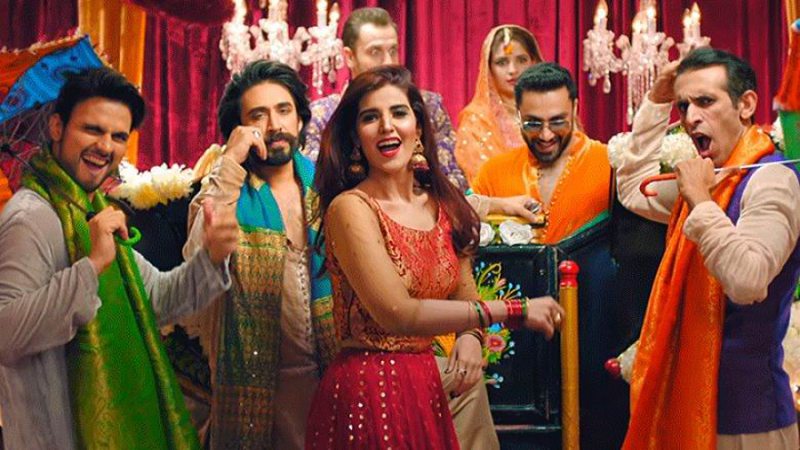 Faizan Sheikh plays the role of a small time hooligan with a romantic heart. He is given an underwritten role with a perfunctory backstory but manages to make Biscuit real and interesting. In a well-written and well-made movie, his cinematic debut would have generated headlines. Parchi, indubitably, is neither well-written nor well-made and does Sheikh a huge disservice by all nut hiding his brilliant take on Biscuit amongst its hubris. The talented actor could and should have chosen a better movie to be his first film. And just about any movie would have been better than Parchi.

There are many reasons to hate Parchi – shoddy cinematography, clumsy camera movement, poor framing, dynamic range problems, substandard sound, faulty dubbing, a jarring background score, inept screenwriting, a senseless story, witless dialog and a preponderance of bumbling actors looking to make their mark by cracking a joke – but none is as big as the dishonesty that lies at the core of Parchi. It is a deceitful, inconsiderate and unprincipled film that has been relentlessly promoted for weeks in schools, shopping malls, public areas, cinemas, morning shows, cricket matches, restaurants, stores and wherever else the film’s empowered female lead was allowed to shake her booty. It enticed viewers to the cinemas by planted news articles, carefully curated endorsements, manufactured reviews, fake interviews and a lot else resulting in a waste of money, time and energy. Parchi is so bad that there is no possibility that the cast and crew did not know that the film was a dog. Yet, the team manufactured enthusiasm that was inherently perfidious. The pompous tagline – Parchi Will Blow Your Mind – is a slap on the face of anyone who spent a few hundred rupees and almost three hours watching what is truly a turd of a movie. The truth is that Parchi will not blow anyone’s mind. However, it definitely does blow as a film.

The writer lives in Dallas and writes about culture, history and the arts. He tweets @allyadnan and can be reached at allyadnan@theafterhoursgroup.com