The Pakistani nation shares with Iran the will to resist pressures and threats. Both continue to rise with sublime dignity

Trump’s out-bursts grow from his notion of America First, where he merges his existence with passion, that defines his National Security Policy. It goes something like the following, ‘Protect the homelands way of life; promote American prosperity; persevere peace through strength; advance American influence in the world; build India as counterweight to China.’

Trump strategy flows from this policy. It is a hydra-headed strategy, targetting Palestine, Afghanistan, Iran, China, North Korea and Pakistan in particular

Palestine: Trump celebrated the 100 years of Balfour Declaration of 1917, which is a public statement issued by the British government during World War I, announcing support for the establishment of a “national home for the Jewish people” in Palestine, then an Ottoman region with a minority Jewish population. It read:

“His Majesty’s government view with favour the establishment in Palestine of a national home for the Jewish people, and will use their best endeavours to facilitate the achievement of this object, it being clearly understood that nothing shall be done which may prejudice the civil and religious rights of existing non-Jewish communities in Palestine, or the rights and political status enjoyed by Jews in any other country.”

Thus, Trump has wrecked the possibility of establishing the states of Palestine and Israel, bringing the whole of Middle East to a state of crisis and catastrophe. This would result in the decimation and destruction of more Muslim countries like Crusade One, which began in 2001. This is now Crusade Two, “to advance American influence in the world through strength.” Therefore, chances of peace in Palestine now are remote, because the Arab World has its interests diverted towards war in Syria, Iraq and Da?sh and is engaged in managing the ravages of Arab Spring, while America, who could negotiate peace, has taken sides with Israel.

Pakistan lies at the centre stage of the regional conflict syndrome. It has to tread carefully by protecting its interests, through the support of the people, embodied in the elected Parliament, and by building blocks of regional support of Iran-Afghanistan-Pakistan, under the security partnership of China and Russia

Afghanistan: America lost the war in Afghanistan by 2010, when they sent Richard Armitage to me, seeking dialogue with the Afghan Taliban, who were not ready to be cheated again, as they were in 1990 and demanded that the occupation forces withdraw as the pre-condition for talks. Despite set-backs and the gradual erosion of authority, Trump continues to reinforce his defeat through various machinations such as indirect support to Da?sh in Afghanistan, thereby creating a very serious security dilemma in all the neighbouring countries. He is also threatened Pakistan, to contain and curb the rising power of the Afghan resistance, so that he could “build India as the counter-weight to China”, and establish Indian hegemony from Afghanistan to Bangladesh, under the Indo-Pacific Regime. The purpose is “to persevere peace through Strength.”

Iran: Since 1980, Iran has been demonized as a serious threat to the regional countries, yet Iran has emerged resilient and strong despite sanctions, embargoes and trade restrictions, compelling America to find peace with Iran, by signing the Nuclear Deal. Trump now calls this deal “the worst deal ever been negotiated” and is not ready to sign the waivers on Iran sanctions, and threatens that “the best way to lock-in the Iranian hard-liners for the two decades would be to tear up the deal.” Trump may tear-up the deal, but he cannot shake-off the resolve and self-confidence of the Iranian people, to “struggle to persevere peace through strength.”. 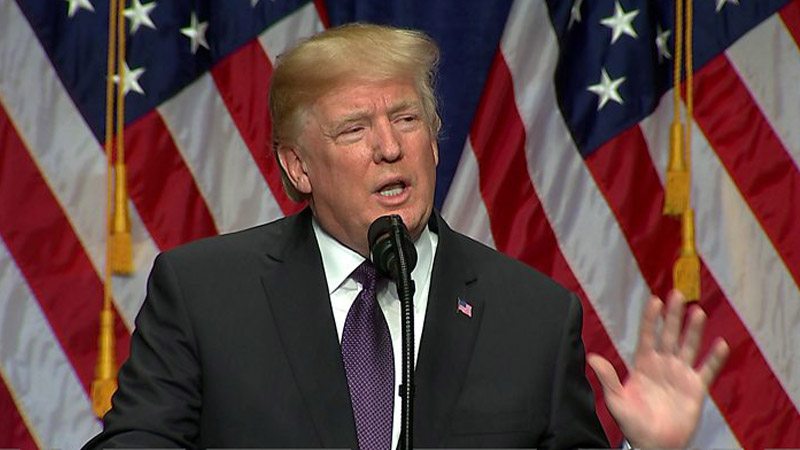 China:  Trump has called China “the strategic competitor.” Instead of joining hands with China and follow their geo-economic strategy of peace through regional cooperation, he is trying to build-up the Indian counter-weight, against the rising military and economic power of China. The Indian Counter-weight, which could not contain and curb Pakistan from rising, now has been assigned the task to contain China, with “United States locked and loaded”, in support of India. A withering super power could do no better than this.

North Korea: With limited nuclear weapon delivery capability, North Korea has been able to deter America, despite possessing a stock-pile of nuclear weapons, the most efficient delivery system and a state of the art air defense capability. Despite this America has failed to develop a strategy that could build up pressure on North Korea, and is showing a kind of helplessness, expecting China to bring sanity to the North Korean leader. The state of helplessness in case of North Korea, as well as Afghanistan, exposes the hollowness of   America, who are trying to advance their influence in the world, through farce policy initiatives.

Pakistan lies at the centre stage of the regional conflict syndrome. It has to tread carefully by protecting its interests, through the support of the people, embodied in the elected parliament, and building blocks of regional support of Iran-Afghanistan-Pakistan, under the security partnership of China and Russia. The Pakistani nation shares with Iran, the will to resist, pressures and threats and continue to rise with sublime dignity of the great civilizations with whom it shares common borders. Pakistan is in the Heart of Asia, as late Liaquat Ali Khan reminded the nation and we have to prove to be true to this great heritage.

The Emergency Session of the OIC did not show any seriousness amongst the members of the states. Only a few heads of the State attended. There has been erosion of unity amongst them, and the Arab world in particular has been in a state of disarray after the Arab Spring. Taking advantage of the regional anarchy, America and Israel have struck, which seriously “prejudices the civil and religious rights of the Muslims and other communities of Palestine”. The situation poses a big challenge to the entire Muslim World. Except for Turkey and Iran, none seem to be taking the matter seriously. The UN General Assembly has overwhelmly voted against Trump’s Palestine Policy, and hopefully it would put a check to Israel’s ambition of expanding at the cost of Arab territories for Greater Israel.

The writer is the former COAS Pakistan. He can be contacted on [email protected]