From Belgium and jail with love: the surreal Catalan campaign 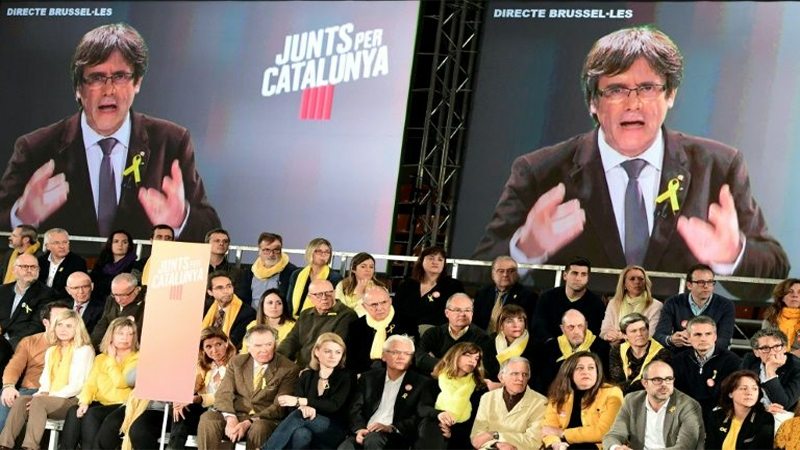 With one candidate speaking via video conference from Belgium and another sending dispatches from prison, Catalan separatists are engaged in a highly abnormal campaign ahead of pivotal elections on Thursday.

Carles Puigdemont and Oriol Junqueras, the president and vice-president of Catalonia who were deposed by Madrid, have had to resort to alternative ways of campaigning for polls on December 21, when they will be pitted against each other to lead the region.

How that will work if one of them wins, however, remains a mystery. Puigdemont fled to Belgium after the Catalan parliament declared independence on October 27 and is wanted by Spain on charges of sedition, rebellion and misuse of public funds for his role in the secession drive.

Junqueras — who remained in the country — was jailed pending an investigation into the same charges.

Puigdemont says he decided to go to Belgium to demonstrate that Spain is subjecting separatists to a “political trial”.

Calling himself the “legitimate president” of Catalonia, he heads up the Together for Catalonia list that includes members of his conservative PDeCAT party and independent candidates.

The list has slowly been gaining support, according to opinion polls, closing the gap with Junqueras’s left-wing Esquerra Republicana (ERC) party, which is largely favourite to win.

“We vote Esquerra Republicana, but our president is Puigdemont,” explained Eli Baro, one of 45,000 people who flocked to Brussels on December 7 to show their support.

“Puigdemont, our president” is the slogan of his campaign, with his appearance at meetings possible via video conference and his opinions expressed on social media.

ERC, on the other hand, hasn’t had it so easy, with Junqueras behind bars since November 2.

The ERC candidate’s only way of taking part in the campaign is to write articles from his cell, which he sends to his advisors.

From his prison in Estremera near Madrid, Junqueras can only make 10 phone calls a week lasting five minutes each, he adds.

“Of those, eight are for his wife.”

Murcia says that when he speaks to Junqueras, he takes quick notes of what he says and passes the “instructions” on to ERC’s number two, Marta Rovira, who is bearing the brunt of the campaign.

Initially, ERC was the clear favourite to win the elections, according to opinion polls.

But now the party is neck-and-neck with Ciudadanos, an anti-independence party whose leader in Catalonia, Ines Arrimadas, could benefit from divisions in the independence camp.

While they ran as a coalition in 2015, Puigdemont’s PDeCAT and ERC are now on separate tickets, competing for the same chunk of votes.

While they try and put on a united front, both sides have nevertheless criticised each other.

Where they coincide is in their outcry over the jailing of Junqueras, Catalonia’s former interior minister Joaquim Forn and two pro-independence civic leaders.

Both groups have adopted the colour yellow to mark their anger, some wearing yellow ribbons, others yellow coats. However some rifts have emerged.

Carles Mundo, an ERC member of the sacked government who was in jail until last week when a judge released him on bail, said Puigdemont could not be president again and it was a mere “dream” that he could come back and retake his position.

“To say that there can be another president is to accept that Rajoy can change our president,” retorted Jordi Turull, who was also freed with Mundo but is part of the Together for Catalonia list.

Puigdemont recently left the door open to coming back for the customary parliamentary debate before a candidate is officially voted into office.

But he pointed to how paradoxical it would be to “leave the parliament in handcuffs” after the debate and possibly taken to the same prison as his former vice-president and now rival.