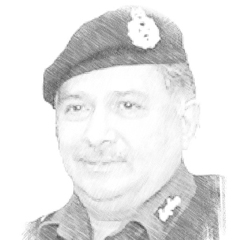 Mashal  between despair and hope

The gory incident at Abdul Wali Khan University where I am pursuing doctoral research shook me to the core.

Ever since I joined the Police Service of Pakistan in 1989, I closely witnessed the violent tide of religious extremism taking multiple shapes. I saw the fabric of our society tearing apart by different groups raising shrieking slogans of kafir kafir against rival groups. As a serving police officer, I frequently dealt with situations involving mutilated bodies of people killed in bomb blasts that had started as a chain reaction of the Afghan War. I experienced death staring me in the face on multiple occasions when I was serving my duties as the SP and the DIG in Swat during the heyday of militancy led by Sufi Muhammad and Molvi Fazlullah. Instances of IED and suicide blasts and targeted killings were the norm during those days.

When, I was posted in Mardan I could tell that terrorist outfits had penetrated deep into the society. There were areas where these groups had established a parallel state structure, running their own administration and courts. It seemed that ordinary people were too scared to raise a voice against this.

As I led an operation against these groups, I was targeted in a suicide attack which resulted in the martyrdom of my security guards. I narrowly escaped death as I had left the vehicle about a minute before the blast.

All these blood-stained incidents failed to break my resolve. I remained optimistic. The source of this optimism was the educated youth. I told sceptics that establishing new institutions of higher learning would serve as the engine to propel this change. This optimism kept motivating me to serve in the police force, even under great threat to my life and that of my family. And I did not lose hope that a better tomorrow was still around.

But my dream of a changed society was shattered the day Mashal Khan was lynched by his fellow students on university campus. I was appalled and shocked as I watched the video of the gruesome murder. I was aghast with disbelief to watch students at a higher seat of learning shouting slogans as they killed Mashal and then beat up, disgrace, and disfigure his mutilated body. I could not believe that such an incident could ever happen at a university. The acts of vandalism committed by the mob that killed Mashal were so disturbing and heart breaking that I had never shuddered the same way even during the peak of terrorist attacks in Swat during 2007 and 2008.

Not long after the lynching incident, news emerged that the university had rusticated Mashal and two other students for alleged blasphemy. We also witnessed the behaviour of the imam of the mosque in Mashal’s village who not only refused to lead his funeral prayers but also actively stopped others from doing so.

However, when all seemed lost, Mashal’s graceful father Iqbal Khan’s statements given to the media rekindled my hope and enabled me to gather courage. I decided that I must express my solidarity with him and display the courage of my conviction publicly. I shared my thoughts about the incident with my enlightened friends and my hope received a new lease on life as they all readily agreed to accompany me to visit Mashal’s family. As were ached the village, I could see that people from all walks of life had thronged the family’s house to mourn their loss. The place appeared gloomy at first but with an outpour of sympathisers from different regions I could gradually feel a significant change in the atmosphere. It was as if a fresh breeze of hope had been blown. It seemed that after a long dark night a new dawn with a counter-narrative to the extremist propaganda was set to emerge.

Mashal’s photos and his thoughts take me back to my own university days. As students, we used to debate and question everything, seeking answers based on critical reasoning.

Following his death, Mashal has illuminated Pakistan with his humanist ideas. He has become an eternal symbol of peace and progress. We should not forget that Europe had also experienced bloodshed because of religious extremism. But Europe’s march on the path of progress started when scientific thinking flourished and ushered in new discoveries and exploration.

State exists to protect life, property and honour of citizens. Both Anglos-Saxon and Islamic jurisprudence emphasise due process of the law. No one can be given the right to take the law in their own hands. No person or institution can be allowed to become a prosecutor and a judge at the same time. The rule of law must prevail if we want to live in a humane society.

The author is a former Home Secretary of KP province. He can be reached at aashah7@yahoo.com