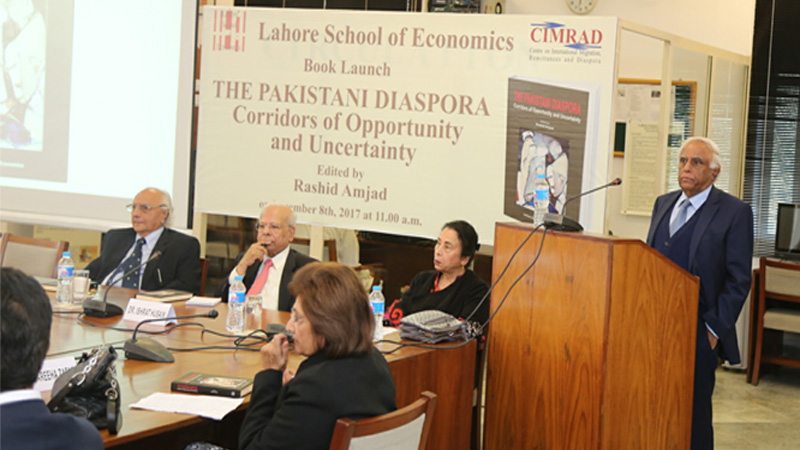 LAHORE: A book highlighting the issues faced by Pakistani migrants titled: ‘The Pakistani Diaspora: Corridors of Opportunity and Uncertainty’ was launched on Friday at the Lahore School of Economics (LSE).

While addressing the ceremony, Dr Ishrat Husain said that the book was being published at a time of mounting debate over the future of international migration and ensuing anxiety among migrants. He added that the book was just the beginning of an era where we should review our policies regarding diaspora. He said that the second generation of Pakistanis in US were just like Americans. “However, they are still giving charity to the social projects like Shuakat Khanum Memorial Cancer Hospital or they are buying property for their families,” Ishrat said.

While sharing some facts, he said that in 1980s, on average 7,000 Pakistani students resided in the US in contrast to 28,000 Indians. “However, post 9/11, these number are 5,000 Pakistanis and 130,000 Indians. The Indians hold key jobs in media industry, IT industry and the Silicon Valley. They have their lobby in US Congress as well,” he said, adding that they also influenced US policies for South Asia.

Dr Ishrat went on saying that unfortunately except few educational institutions including LSE, LUMS and Agha Khan, no other universities welcomed Pakistani scientists, researchers, academicians and professors working in other countries. He also noted that only three countries in the world had surplus youth population, but they were unable to utilize their talent.

Dr Rashid Amjad, in his address, said that the book was unique in many respects. “It does not merely analyze the growth of diaspora in a historical context, but also provides valuable insights into the cost and benefits of migration, social remittances, and engagement of their families in the new host country and the families they leave behind,” he said. He also said that besides migration towards other countries, migration had been constant in 56 districts of the country, especially Karachi, central Punjab and few districts of Khyber Pakhtunkhwa and Balochistan.

“A large number of people face losses in the struggle to migrate to foreign countries. Dozens are killed on their way to Greece. They are imprisoned in different countries while trying to reach Europe illegally. Other countries usually celebrate diaspora day and discuss issues being faced by migrants but no one in our country thinks about this,” he said. He also highlighted that the State Bank of Pakistan had written to the Finance Ministry that it wanted to start saving bonds for overseas Pakistanis.

Dr Fareeha Zafar in her speech reflected upon the social side of diaspora and remittances. “The Pakistani Diaspora represents a close interaction between the host and the home country,” she said.

She observed that due to better transport facilities, third and fourth generation Pakistani diaspora was visiting their mother country.

Dr Nasra Shah said that the trends of migration were changing and a downturn had already begun in the gulf. She suggested that policies should be devised for easing re-absorption of returnees in the home country.

Dr Shahid Amjad, rector of the Lahore School of Economics, in his concluding remarks, suggested that Pakistan must develop safe and secure mechanisms to foster foreign investments and trade in Pakistan.