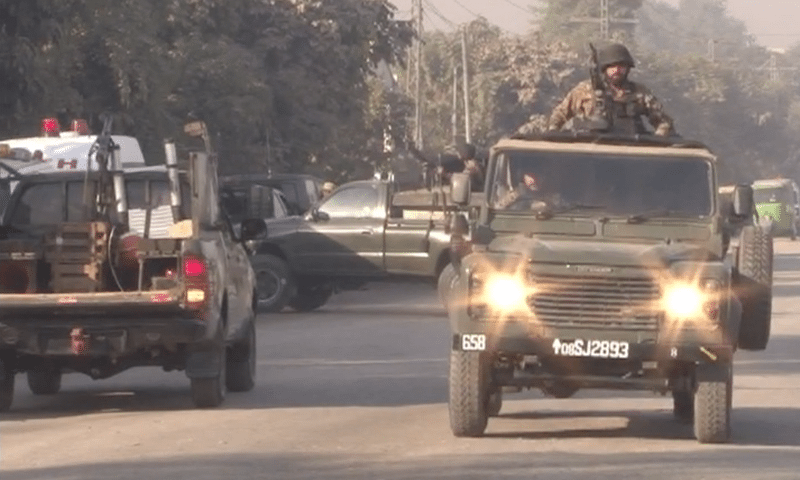 LAHORE: Eleven people were martyred and more than 30 injured after four terrorists broke into the hostel of the Agricultural Directorate in Peshawar on Friday morning.

Seven students, four security officials,  two watchmen and a journalist were among the injured, the police said.

A police official said the attackers’ first target was the security guard of the premises.

“They could have wreaked havoc but the police and army successfully neutralised the threat,” he said further.

Officials confirmed the killing of all five terrorists inside the premises after more than an hour and a half operation by Police and Pak Army. The clearance operation after the shootout was also said to be over.

The terrorists wearing Burqa arrived at the scene via an auto rickshaw. They abandoned the rickshaw outside the entrance of the directorate before shooting the lone security guard.

Eyewitnesses reported at least five explosions taking place inside the compound. Police officials added that at least three unused suicide vests, seven hand grenades, explosives, automatic weapons, five magazine of AK 47 riffles and many rounds of ammunition were recovered from the bodies of the terrorists.

Police personnel arrived at the scene soon after the news of the attack. Capital City Police Chief (CCPO) Tahir Khan and Senior Superintendent of Police (SSP) Operations Sajjad Khan had arrived on the spot in the early minutes of the attack. They led the police operation right from the front.

SSP Sajjad Khan informed media that a total of five terrorists had stormed the premises after killing the security guard at the entrance. “Fortunately timely operation by the Police prevented huge losses as they were able to engage the terrorists, all wearing suicide vests before they could create havoc,” he said.
Army personnel were called for backup as the fighting continued. Army helicopters taking part in the operation provided aerial surveillance to the forces on ground as the main University Road connecting Peshawar to Hayatabad and Khyber Tribal Agency was cordoned off by security personnel for all sorts of traffic during the operation.

Inter Services Public Relations (ISPR) updated on its Twitter handle that all five terrorists were killed in the operation. It added that clearance operation was being conducted inside the premises to secure the area. Two Army personnel injured in the attack were shifted to the Combined Military Hospital (CMH) Peshawar.

Earlier Police helped rescuing at least 10 students stuck inside a hostel in armoured vehicles while many students are still stuck in their rooms.

The Directorate of Agriculture lies between a nursing hostel of the KTH and University Public School and its hostel.

Earlier one nurse locked inside her flat with her children informed Daily Times on condition of anonymity that Army sharp shooters had occupied the top floor of their hostel building from where they were firing at the terrorists who took had gained access to the rooftop of the Directorate of Agriculture Extension. “Our flat is facing the directorate and we could see the horrific scenes live from our windows and were helpless as the escape routes were blocked,” she added.

The attack created a panic among those stuck in a residential building and a hostel inside the directorate. Some students injured themselves as they jumped from their windows.

Shahzad Akbar, Medical Director HMC told media that six bodies and 18 injured persons were brought to the hospital. He added that at least eight of the injured were in critical condition.

The University of Peshawar, Islamia College Peshawar and all government offices are closed due to public holiday in accordance with 12th Rabbi ul Awal and most students had gone to their native villages.

“We woke from our asleep as a result of the firing but took it as a business of usual before a loud explosion forced us out of rooms. We climbed a 10 feet boundary wall to save ourselves and also rescued two injured students on our way,” Arif claimed.

CM Khattak told media that the Khyber Pakhtunkhwa Police were alert to security threats and the damage would have been higher if the police were not well trained and ready for dealing with such situations. He added that all hospitals in Peshawar were put on emergency.

It is second terrorist attack in the city in the past eight days. Last Friday, Additional Inspector General of Police (AIG) Headquarters Ashraf Noor was martyred along with his driver in a suicide attack in Hayatabad.

The attack in Peshawar has triggered a country wide security alert in the country as Police is put on alert in Islamabad and Punjab province.