A NAFTA collapse could push Mexico over the edge 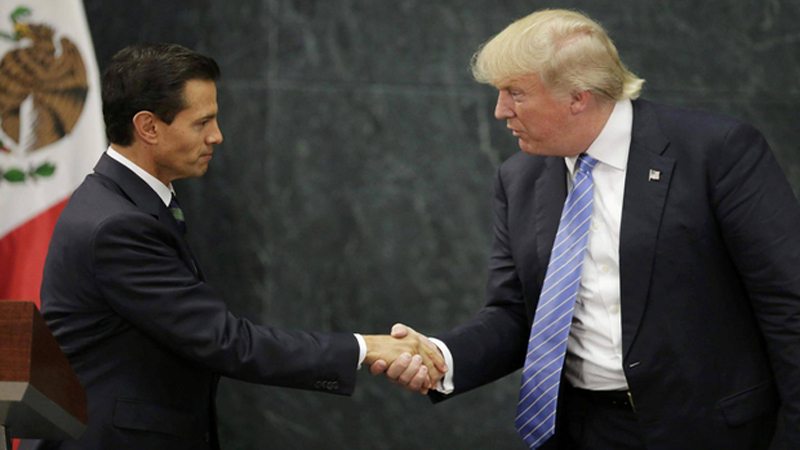 There are two foreign men whose faces you see constantly on the streets of Mexico’s capital these days – on magazine covers, on posters and billboards, caricatured on T-shirts and, in the case of one of them, hung as pinatas.

That one is Donald Trump. He has achieved a folkloric notoriety in Mexico unprecedented among U.S. presidents, after coming to power by demonizing the entire Mexican people as rapists and traffickers and by threatening to savage Mexico’s fragile economy by shutting down NAFTA and building a border wall. To be associated with Mr. Trump, as Mexico’s centre-left President Enrique Pena Nieto made the mistake of doing in 2016 (when he invited the then-candidate to visit Mexico), is to be scarred.

The other is Ernesto (Che) Guevara. This fall has felt like a mass festival around the 50th anniversary of the death of the Argentine revolutionary who transformed Cuba’s revolution into six decades of crippling authoritarianism. He’s a popular figure throughout Latin America, but Mexicans have really pulled out all the stops, releasing several Che-themed motion pictures and TV specials and encouraging his anniversary to be turned into a nationwide political statement. Among urban Mexicans, Che-style Marxist authoritarianism is the forbidden fruit, the tempting alternative that Mexico, unlike every other country in the region, has never tried. The more Trumpismo bares its teeth, the more Gueverismo attracts Mexican voters away from conventional politics or economics. And as NAFTA negotiations stagger and careen amid Mr. Trump’s threats, the risk looms that Mexican voters will be pushed far off the edge.

Mexico’s Che-flavoured alternative is the larger-than-life figure of Andres Manuel Lopez Obrador, the far-left populist who currently leads the polls for the July, 2018, national election. His many followers (mainly among urban and younger Mexicans) see him as a Mexican Che Guevara – an image he has embraced, going so far as to name one of his sons, Ernesto, after the revolutionary. He is probably not a Hugo Chavez – that is, someone who would use the bait-and-switch of economic justice to transform his country into a brutal hermit-state command economy. He is a pure populist whose promises are vague and mercurial – but who would almost certainly trigger an economic crisis and withdraw his country from the North American economic and political system. As such, the current round of NAFTA negotiations going awry or Mr. Trump scuppering the heart of the agreement pose a far, far greater threat to Mexico than to Canada or the United States. It would be damaging, but not fatal, to the Canadian economy. For Mexico, it is an existential threat.

“For Canada, NAFTA is all about trade and economic growth,” said Agustin Barrios Gomez, a former social-democratic Mexican member of parliament who specializes in Mexico-U.S. relations. “For Mexico, NAFTA is a national-security agreement – it is an agreement that anchors an entire geostrategic situation in North America. It is infinitely more important. It establishes an entire direction for the country.” Indeed, by signing NAFTA in 1994, Mexico transformed its entire economic system from one that was often state-owned and closed to the world into an export-oriented economy that has raised living standards and built a middle class. That transformation was painful and often ugly and is far from complete: The entire southern half of the country has missed most of the trade-driven growth, and while the very poor remain loyal to Mr. Pena Nieto’s party, the darkening prospects for North American integration and a general disgust with the Trump atmosphere have led many to reject the status quo.

“In Mexico, there’s an element of betrayal that goes missing in a lot of these discussions of NAFTA,” Mr. Barrios Gomez said. “Twenty-three years later, after we have gone through all the pain of adjustment, it turns out the Americans are going back on their word. It’s not just a matter of political stability, it’s a matter of being humiliated and betrayed by a neighbour.”

To make matters worse, Mr. Pena Nieto’s party, the Institutional Revolutionary Party – which governed Mexico for seven decades as a centre-left de facto autocracy before a decade in opposition forced it to reform itself – has once again come to be seen as corrupt and self-serving and perhaps too beholden to Washington. The mainstream left-wing and centre-right opposition parties aren’t well organized and appear too, well, mainstream. Politicians such as Mr. Barrios Gomez warn that Canada is in a precarious position: One wrong move – even one that sacrifices NAFTA to preserve Canadian interests – could provoke a shift to dangerous instability in our vulnerable partner nation. “It’s not inconceivable that you could end up having a rogue nation right next door to the United States – and for no good reason.”