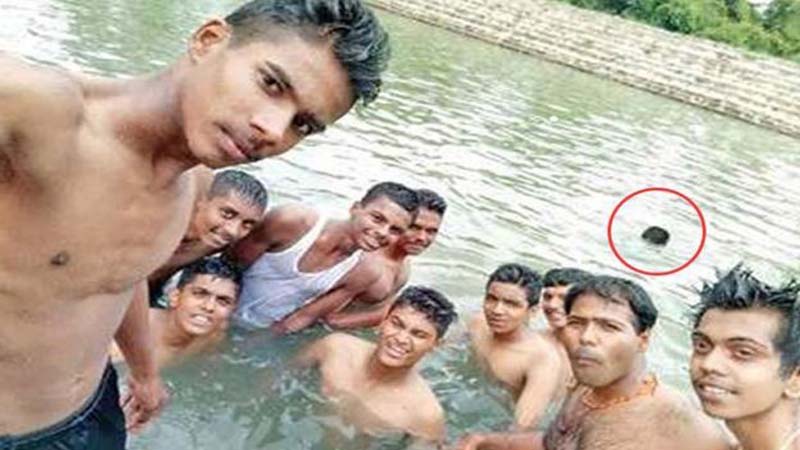 Authorities in the southern Indian state of Karnataka are working on a campaign to warn people that “selfies can kill”. The move comes after the deaths of four students in recent months in selfie-related incidents.

On a sunny Sunday morning in September, about two dozen college students visited a beautiful temple dedicated to Gundanjaneya, or the monkey god Hanuman, about 30km (19 miles) from the city of Bangalore. Built in 1932, the temple in Ramagondlu village is a big draw with pilgrims as well as students from nearby colleges.

The teenagers, who were part of the Indian military’s NCC cadet corps, spent the entire morning cleaning and beautifying the temple premises.

At noon, as the temperature rose, they decided to take a dip in the temple pond. “They were all very happy, laughing, shouting, taking selfies,” local shopkeeper Manjunath said.

But the day ended in tragedy. One of the students, later identified as Vishwas G, drowned in the 15ft-deep pond.

In one of the selfies the boys took, the top of the drowning teenager’s head is clearly visible – but they are looking in the other direction at the camera.

No one noticed him and it was only an hour later that his friends became aware that he was missing. His body was recovered three hours later by the police and local people.

A few weeks later, in another tragic incident just an hour’s drive from the temple, three teenagers were run over by a train while trying to take a selfie.

“I was going to drop my cousin to school and I passed this way at about 08:15 and it was all quiet then,” said engineering student Sharad Gowda, who lives in a nearby village and took me down to the tracks to explain the incident.

“When I returned half an hour later, there were about 100 people here so I came down to see what was happening.

“There were body parts strewn about everywhere. Some people said they were lying down [on the tracks] to take a selfie and that’s why they didn’t see the train approaching. “It was the birthday of one of the boys.” The two incidents shocked Karnataka and the state government wants its young people to think more carefully about the circumstances in which they take selfies, in case they become “killfies”.

“We are working on putting up new signage at tourist sites in 11 districts,” Karnataka Tourism Minister Priyank Kharge told the BBC.

“These will also have messages saying selfies can kill. We will also be launching a social media campaign in a couple of weeks that will go out on Facebook, Twitter, Instagram and other platforms, warning people of the dangers of killfies.”

India has more than 1.1 billion mobile phone subscriptions and more than 300 million people use smartphones.

According to a study by researchers from Carnegie Mellon University and the Indraprastha Institute of Information in Delhi, India has recorded far more selfie-related deaths than any other country in the world in recent years. Of the 127 global selfie deaths the researchers identified between March 2014 and September 2016, 76 occurred in India and most of the victims were reported to be young people.