Sadly, nothing can change the paradigm now; not when you have a former head of intelligence negotiating on behalf of the Government of India

That old cliché springs to mind. You know the one: about old wine in new bottles. At least it does when we hear that the new man appointed by New Delhi has met close to 65 delegations during his very first round of talks. With Ladakh and the youth all poised to feature in his second coming.

The sad truth is that the very idea of ‘dialogue’ is enough to make those who live in conflict feel well and truly utterly sick; to their very stomachs. These are nothing but ever decreasing circles. For only the names and designations of the New Delhi point-men change. The rest remains the same. Exactly the same, in fact, if you look at them from the ruins of what were once homes and the never-ending graveyards of Kashmir.

We all know just who descended upon the valley with the mandate to hold talks with all sections of society. From Rajiv Gandhi’s desire to dial down the violence of the early 1990s to the United Progressive Alliance’s group of interlocutors selected back in October 2010, following that summer’s deadly unrest — all have visited, done meet-and-greets with those from different walks of life, travelled the width and breath of the region, cut multi-faith bread, struck collective poses for the family album (against mandatory backdrops of shikara or snow), been presented gifts, received accolades with wooden or papier-mâché totems. And in the end, when they all went home to regale their grandchildren with tales of the sheer beauty of Kashmir, and while contemplating writing their memoirs, the reports were destined to languish under the sacred dust of Indian indifference. Then it is back to square one until a new man brushes down his suit before hopping on a flight to Kashmir, and the whole merry-go-round begins once more. Thus this notion of internal dialogue has become nothing more than a sham, an exercise in buying time, a ruse made to fit in neatly with the calculations of those who do national and international politicking.

Before any talks are held with stakeholders in Kashmir, it might be an idea for New Delhi to first hold a frank conversation with itself in order to remain focused in terms of intent and purpose. Who are the people with whom it will enter into discussions? And what will the conditions and parameters of these be? When I say Delhi, I am referring, of course, to all those who are engaged in the political process: those in power and in opposition; those who are in the North Block and the South Block; not forgetting the all important men in uniform. The latter, of course, are the most powerful players in this ongoing charade. And without their say so the show simply cannot go on.

It will be in keeping with the manner of things if the current RAW chief reads Kashmir: The Vajpayee Years, penned by another RAW man. Of special interest in the book is the assertion that India is not interested in resolving Kashmir, preferring to manage and disrupt secession instead

The significance of this cannot be overestimated because when the Centre enters into discussion with all the usual suspects — the interlocutors will neither fall victim to the caprices of changing regimes nor evolving polices; a surely welcome break with the past that can help preserve the sanctity of those dusty reports. Otherwise, what happens is a story almost as old as time itself: leaderships change and the said findings are either disowned or categorically rejected by their own party members. Thus what can we expect when the colour changes from saffron to another hue? Or what about if there is cross-partisan consensus but those moustachioed khakis simply refuse to ponder any of the recommendations?

Therefore what is required is nationalisation of the very concept of dialogue, with all stakeholders at the Centre enjoying an equal share of the pie. And once they are happy that all the ingredients have been mixed and seasoned to taste — then they can go and offer it to the Kashmiri people, who may or may not come up with an alternative recipe more suited to their palates. Nevertheless, without a first slice of humble pie there can be no second helping. 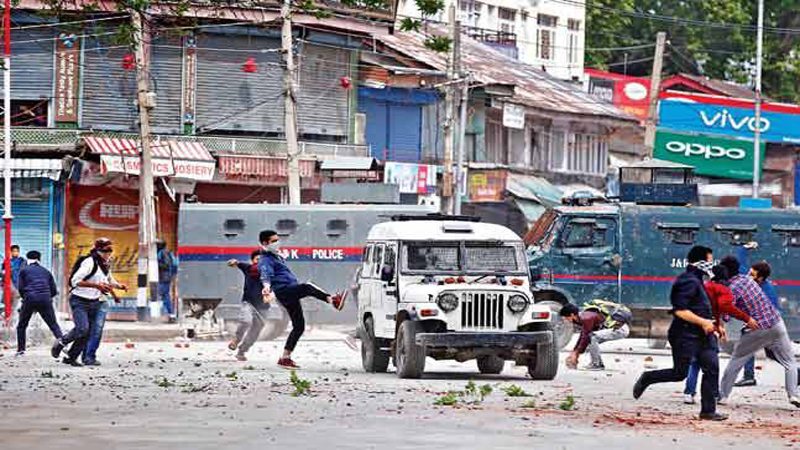 There is one golden rule to remember when it comes to talking Kashmir: context. Given that the bloody memories of the past are yet to dry, any efforts to talk without having secured consensus back in New Delhi, will remain forever fruitless. And this will be sufficient to question both the sincerity and very intention of those who say they want to talk. A conversation initiated by the state of India with the state of Jammu and Kashmir, after all, makes much more sense than one precipitated by a particular government of the day; with one eye on the next elections. And if the civvies are not able to remove a single clause in the Armed Forces (Special Powers) Acts (AFSPA), as was conceded by a former Home Minister — how on earth can they be expected to offer meaningful concessions to break the impasse of the status quo?

Sadly, nothing can change the paradigm now; not when you have a former head of intelligence negotiating on behalf of the Government of India. History is full of examples showing how disputers that have assumed international dimensions have the best chance of being resolved when led by neutral agents at neutral venues. Like the Oslo Peace Accord. Yet that option is now off the table. It would be in keeping with the manner of things if the current RAW chief read — instead of the numerous reports of various committees, which in all likelihood could take more than one lifetime to get through — just one book: Kashmir: The Vajpayee Years.

Penned by another RAW man, AS Dulat, it makes for an enlightening read. Firstly, there is the assertion that India is not interested in resolving Kashmir, preferring instead to manage and disrupt secession in the friendliest manner possible. Secondly, New Delhi and Islamabad have converted the territory into a chess game, where the rules are based on manipulation and violence, without a second thought to the pawns trapped on the board. Thirdly, nothing is more important than maintaining the status quo.

The chances are that after reading the book — the new interlocutor will pack up his things before even having fully unpacked them. However, unpack them he must. Not for resolution, you understand, but just to try and cool the temperature in Kashmir. Even a stammer here and there may be sufficient to calm the turbulent waters. He may not end up with any settlement of his own making, or even manage to slap a report on the table — but there is a passing chance that the braid choppers may take a break. Meaning that what we might well end up with is the freedom to have long hair. In the murky military climate of fear, even that is far better than recoiling in fright from the shadow of a stranger near your home.

The writer can be reached at javjnu@gmail.com