The democratic traditions of parliamentary government are yet to be established in Pakistan. The Pakistani brand of democracy is quite bizarre and continues to evolve

Pakistan Foreign Minister (FM) Khawaja Asif recently said “Afghan policy should be drawn up by politicians and not by generals”. A couple of weeks ago an exchange of hot words took place between DG ISPR Major General Asif Ghafoor and Pakistan Interior Minister Ahsan Iqbal. These are some recent manifestations of a cloaked tug of war between the army and Parliament in Pakistan. This is quite normal in Pakistan.

The democratic traditions of parliamentary government are yet to be established in Pakistan. The Pakistani brand of democracy is quite bizarre and continues to evolve. I coined this new term, ‘four-star democracy’ for Pakistan where army rather than the elected parliament plays a dominant and leading role in major decision-making. In Pakistan, the army is headed by a Four Star General and the office of the Chief Of Army Staff (COAS) is more powerful than the office of the Prime Minister (PM). Welcome to the four star democracy of Pakistan.

In Pakistan, intellectuals, lawyers, civil rights activists and ruling politicians support democracy and civil rights while the general public sees military generals as saviours. This mindset has existed for many decades in Pakistan. Even elected sitting opposition in parliament of Pakistan always look towards to the GHQ for interference, regime change or midterm elections.

There has always been confusion as to who rules Pakistan. The military has always tried to influence statecraft in Pakistan. Principles, doctrines and issues of foreign relations and national security are decided and executed by the military as per traditions and the elected government sometimes pretends it runs the show.

Lets explore a few historical and recent features and the roots of Pakistan’s four star democracy.

Principles, doctrines and issues of foreign relations and national security are decided and executed by the military as per traditions and the elected government sometimes pretends it runs the show 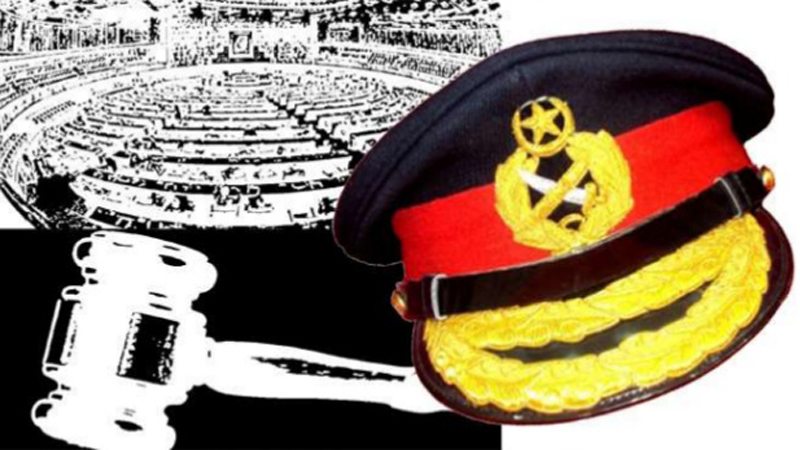 During this experimental time period, elected politicians of Pakistan established their identity as corrupt and incompetent. In 2017, Pakistani elected politicians are still playing a democratic comedy drama on the Parliament floor. The parliament has become a constitutional theatre full of corrupt comedians. Hence the army is given the license to interfere in politics because it is perceived that Pakistani military generals are patriots who have the competence to handle foreign policy and national security matters.

‘Bloody civilians’ is a popular phrase often used by military men in Pakistan. They use this phrase for politicians most of the time. Three or four star class in military think and believe that politicians sitting in the parliament are not worthy of handling issues of foreign policy and national security. So in Pakistan, the military never gives a free hand to elected politicians.

Lastly, historically the American factor has been very dominant in the evolution of the four star democracy. America has used military dictators in the past for its own geo-political and regional ambitions. For instance, the USA used General Zia in the 1980s to fight the USSR in Afghanistan. Similarly, after the 9/11, the USA hired General Pervez Musharraf in 2001 to fight against Al-Qaeda and the Taliban in Afghanistan.

At the end, I would like to suggest some cures for the four star democracy. When a corruption free Parliament full of honest and sagacious political leaders will be there, then parliamentary democratic conventions will start to grow and the civilian leadership will be able to run state affairs freely and democratically according to the constitution.

The writer is lecturer at the Department of Sociology, Government College University Faisalabad. He can be reached at sajidmahmoodsajid@gmail.com