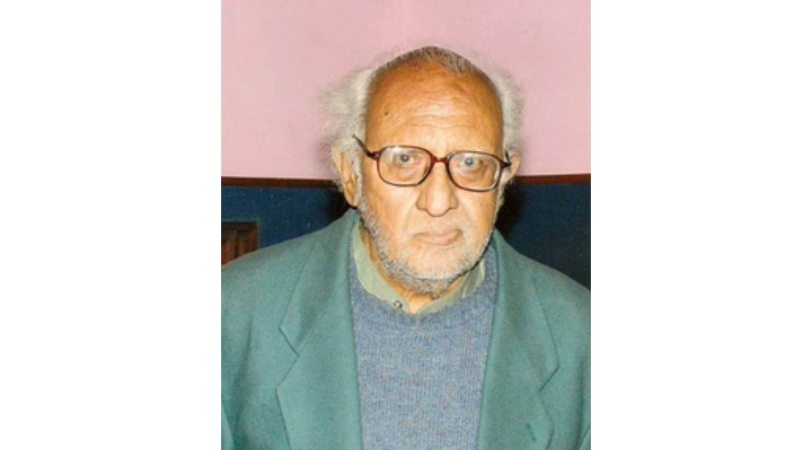 I am writing this piece on Master Manzoor Hussain not because he was a dear friend but for the fact that he was a superb music composer and a very knowledgeable person as far as Raagdaari (knowledge of raags) is concerned.

He tried his hands in the film industry during the late 1950s. His film ‘Savera’ starring Shamim Ara and Kamal had a beautiful song “Tu Jo Nahi Hai Tou Kuch Bhi Nahi Hai” rendered by SB John with lyrics by Fayyaz Hashmi. Both Master Manzoor Hussain and singer SB John became immortal because of the beauty of this melody. After more than five decades of its creation, this melody remains resonant in our ears. Indian director Mahesh Bhatt lifted this song for his film ‘Woh Lamhe’ in the music of Pritam many years later. He said in some interview that his mother loved this song, so he made some changes in the lyrics and recorded it in the voice of Glenn John, SB John’s son as SB John had died by then. The song was performed by actors Kangana Ranaut and Shiney Ahuja. This movie was believed to be based on the story of Indian actress Parveen Babi.

Manzoor Hussain tried his hands on another movie by dancer Hameed Chaudhary with Sultan Rahi and lyrics by Khawaja Parvez. I wonder if it was completed. By temperament Manzoor was not suited for films, so he spent all his life in Pakistan Television Corporation and Radio Pakistan until the age of 84 when he received the President of Pakistan’s prestigious civil award, the Pride of Performance.

Manzoor’s father’s name was Master Fazal Hussain. He was known as a competent sarangi player hailing from Shah Alami Gate, Lahore. This area where this family hailed from confirms the fact that they were residents of Lahore. Initially, Master Fazal Hussain lived in Mozang Chungi. Fazal Hussain was the pupil of Pyaare Khan of Gawaliar Gharana from whom he learnt the tricks of the trade. Pyaare Khan was the father of Umeed Ali Khan, so the style of singing of this school of thought was transferred to Fazal by Pyaare. Fazal used to approach Mian Pyaare Khan to learn sarangi also despite that the latter was a vocalist.

Fazal had four sons; Manzoor, Bashir Hussain, Imdad Hussain and music composer Altaf Hussain. The youngest son was a very melodious music composer. I have rendered many tunes composed by him for PTV and radio. Bashir Hussain was known as professor due to his knowledge of music. He deviated from the family tradition and became a pupil of Akhtar Hussain Khan of Patiala Gharana. Manzoor’s inclination on the other hand, was towards Gawaliar Gharana style of music. Often, Manzoor used to ask his brother Bashir jokingly to refrain from his tutelage, as he knew better than his brother’s Ustad.

When Manzoor was eight or nine years old, he was borrowed by Umeed Ali Khan from Fazal. Fazal could not refuse his teacher’s desire. So, Manzoor started his tutelage at the age of nine. Ustad purchased nine suits of the cloth boski for Manzoor; a precious gift. Surprisingly the relation with his teacher, as per Manzoor, was that of a father and son and not that of teacher-pupil one.

The daily riaz (practice) comprised training sessions through which it was taught to Manzoor as to what to reveal and what to conceal as was done in poetry writing centuries ago. It was due to this training that Manzoor knew how to accompany great instrumentalists on harmonium with naghma (ascent and descent in one cycle of rhythm). In this connection, two anecdotes still resound in the music circles of Radio Pakistan, Lahore.

Manzoor’s pet name was Jhoora and Lamma. So he was often referred to as Jhoora Lamma. Once, Jhoora played a naghma with Ustad Allah Rakha, the great Indian tabla player on the latter’s visit to Pakistan. He had accepted Ustad’s invitation from someone in the audience to play naghma with him. Manzoor accepted the invitation. The over-confident Ustad remarked that he shall not be able to sustain the hissing of his ‘Teen Taal’ snake movement. Jhoora played the naghma with his dikhana/chupana trick and later Ustad Allah Rakha is known to have complained to Jhoora’s maternal aunt that Jhoora had thrown ash on his head. 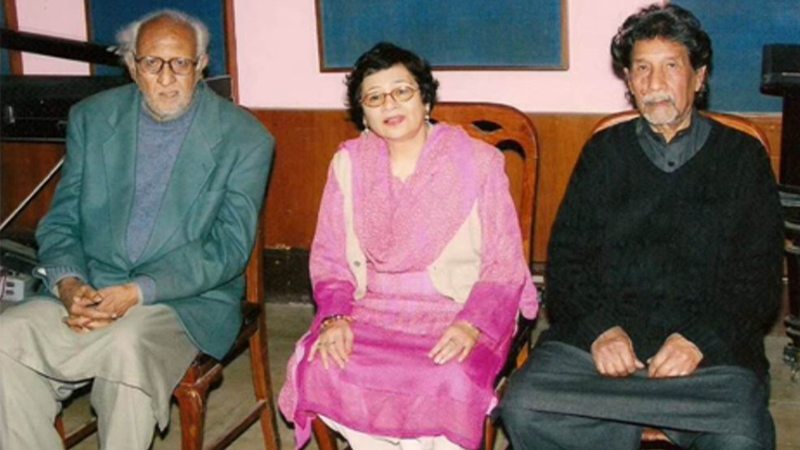 The second anecdote relates to the great Ustad Shaukat Hussain, tabla Player. Before a stage performance, Jhoora requested Shaukat Sahib for a rehearsal but was responded to with the famous sentence “Ankh Wala Tere Joban Ka Tamasha Daikhe” (let the eye watch the drama of your prime). The result was similar to as in the former case narrated above. These anecdotes have been running in Radio Pakistan’s corridors since long.

Incidentally, Haddu Khan Hassu Khan duo was the proponents of Gawaliar School of thought in music and the duo was among the ancestors of Pyaare. That brings me to discuss here Gawaliar Gharana at length for its relevance.

According to Wikipedia, the Gawaliar Gharana is the oldest Gharana of Kheyal form of classical music. The rise of the Gawaliar Gharana started with the reign of the great Mughal emperor Akbar. The favourite singers of this pattern of the arts, such as Mian Tansen, were the first amongst the vocalists at the court. He came from the town of Gawaliar.

During the era of Mughal emperors, Ustad Naththan Pir Bakhsh and his maternal grandsons were the legendary Haddu, Hassu and Natthu Khan. The main musician in the court at the time was Ustad Bare Muhammad Khan who was famous for his taan baazi (notes’ embellishments). Both Ustad Bare Mohammad Khan and Ustad Naththan Pir Bakhsh belonged to the same tradition of Shahi Sadarang.

Some sources believe that Ustad Naththan Pir Bukhsh settled in Gawaliar and evolved the style features that led to this gharana. Others claim that individuals named Naththan Pir Bakhsh and Nathu Khan were the founders this gharana. The accepted version is that Naththan Pir Bakhsh left Lucknow in Uttar Pradesh to escape the professional rivalry with Ustad Shakkar Khan that had taken an ugly turn. He arrived in Gawaliar with his maternal grandsons Haddu Khan and Hassu Khan.

Another great kheyal singer, also originally from Lucknow, was Ustad Bare Muhammed Khan, who brought the concept of Taan into kheyal singing. Haddu and Hassu further enhanced the style of the Gawaliar gharana as we recognise it today. Hassu died prematurely. Haddu’s sons, Rehmat Ali Khan and Ustad Bare Inayat Hussain Khan were widely acclaimed singers who liberated the Gawaliar style from the methodical form it followed to the emotional style that they preferred.

Later, it were the disciples of the duo Ustad Haddu / Hassu Khan that both preserved as well as propagated the art. For instance, their pupils Vasudeva Buwa Joshi, Ramkrishna Deva and Banne Khansaheb, spread it further. It was Ramkrishna Deva’s pupil Bal Ramkrishna Buwa Ichalnikar, who took the Gawaliari Gaeki (singing style) to Maharashtra.

However, the most beloved of the duo’s was Banne Khan, who was previously a dhurpad and dhamar singer from Amritsar. He took the art to Punjab and Sindh. It is said that he served the duo so much that he was treated like the eldest son of the family. Later, when he had learnt the art to its perfection, the man trained a good number of pupils in Punjab and Sindh to carry it further. His pupils included his cousin-brother Amir Khan, Gamman Khan, Bhai Atta, Ali Bukhsh/Kale Khan, Mian Qadir, Bhai Wadhava / Bhai Wasawa and so on. Later, Banne became a musician at the court of the Nizam of Hyderabad. After him, Amir Khan too played an active role in spreading the art. He even taught the pupils of Balkrishna Buwa Ichalnikar. However, he later focused upon his four sons. Out of whom, Pyaare earned a great name. He introduced the kheyal genre in Afghanistan when he represented pre-partitioned India in Afghanistan on the second annual celebration of its independence on August 19, 1992. He became a court musician there and the teacher of another Afghan court singer, Qasim Afghan. After, he became the court musician at the court of Maharajadhiraj Maharawal Sir Jawaharlal of Jesairmal. After this, he became the teacher of Seth Vishandas of Hyderabad, Sindh. He was also the teacher of Mahant Girdharidas of Bhumanshah.

Krishnarao Shankar Pandit occupies an important place in the gharana of Haddu. He received his early musical tutelage from his father, Shankarrao Pandit, who was a disciple of Ustad Haddu Khan and Ustad Nathu Khan – the innovators of the Gawaliar style and then Nathu Khan’s son Nissar Hussain Khan. Benefiting from intensive training from his father, Krishna Rao’s regiment included pre-dawn practice in the woods to perfect swara, laya and breath control. He was taught wrestling, gymnastics, yoga and swimming to develop stamina, and a range of three octaves. 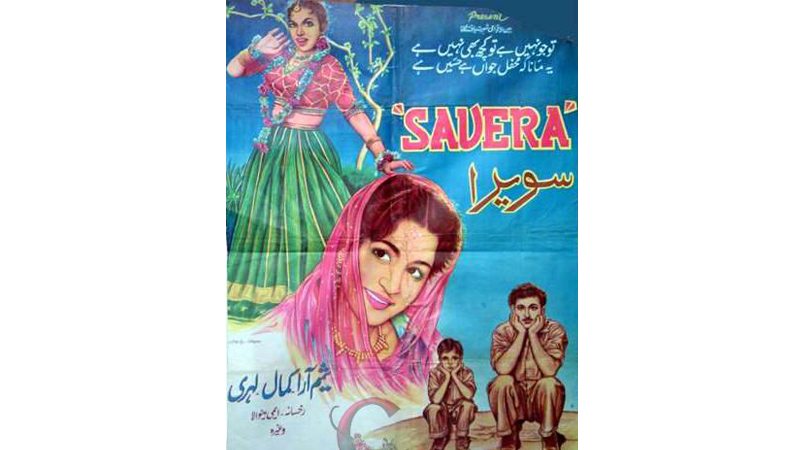 With such a rich background of this gharana, Manzoor was well trained by Pyaare. Manzoor needed lessons in the second important element of music that is the rhythmic part. His maternal grandfather Mian Nabi Bukhsh came handy and taught him the theory behind playing tabla and also how to play it.

With that background, one would have imagined Manzoor to become a classical singer or a tabla player. Instead, he chose to be a music composer. As a matter of fact, Manzoor had reached to the actuality and core of a raag. Those were the days when he used to listen to the music compositions of Indian music composers Anil Biswas and Naushad Ali for their films. He was amazed as to how Naushad Ali used a raag’s treatment, importance and health to compose a song in a given film situation. He also listened to the rhythmic carpeting given by Naushad Ali to his songs. Desiring to compose music like Naushad, he approached Umeed Ali Khan for advice. The latter was also interested in the art of making music compositions and liked Naushad’s music in the films, so he gave Manzoor his blessings; a go ahead signal. Naushad was therefore the spiritual teacher of Manzoor.

Manzoor used to visit Radio Pakistan on daily basis. He continues with this ritual while he lived in Samanabad. At later stage of his life when his son moved him to Bahria Town area, there was a lull in this routine because of large distance to Empress Road. Manzoor was an entity seen discussing music with great Ustads or with the musicians in the Radio Canteen or in any producer’s room. He transferred his knowledge to Radio Pakistan’s Central Production Unit’s compositions or supervise the classical music recordings at Broadcasting House. His presence was a matter of pride and blessings for all concerned. 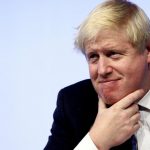