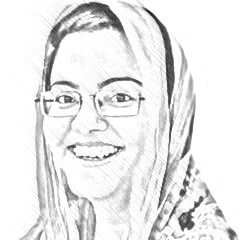 Kala Bagh Dam remains a politicised issue, and many Pakistanis are convinced that it shouldnt be built. Personally, I fail to understand why some people are so frightened of the project

Infrastructure for power production has always remained lacking in Pakistan. In the past 70 years, we have only built a few small dams. As population increases, we will probably need more. But doing so may bring Pakistan’s energy production to a level which is able to satisfy Pakistan’s energy consumers, and who would want that? This is why we shouldn’t build Kala Bagh dam.

Every time there are elections in Pakistan, each party promises that they will end load shedding in the country. And as always, their promises turn out to be thin air. Moreover, Kala Bagh dam remains a politicised issue, and many Pakistanis are convinced that Kala Bagh dam shouldn’t be built. Personally I fail to understand why these people are so frightened of Kala Bagh dam.

The reality is that Pakistan is facing serious water shortages. Our current water supply is not enough to meet our agricultural on energy requirements. The population is estimated to increase to 221 million by 2050, and the dams we have are already losing their storage capacity.

Kala Bagh dam can improve Pakistan’s economic condition by helping the industrial and agricultural sector. Employment opportunities will increase and so will exports. All provinces will benefit. If the dam is built, Khyber Pakhtunkhwa (KPK) will receive an additional1.895million acre feet (MAF) to it’s current 1.975 MAF of water.

The country is now a victim of a chronic energy crisis. We cannot come out of this crisis without constructing dams. Regardless of the political conflict among the country’s provinces over this issue, action needs to be taken to resolve energy and water shortages

Pakistan has lost about 1040 MAF of water to the sea in the past 34 years. Our failure to construct more storage dams after the completion of the Tarbela reservoir in 1976 has greatly constrained our economic growth. The country is now a victim of an energy crisis along with droughts. We cannot come out of this crisis without constructing dams. The political conflict between the country’s provinces over this issued needs to disregarded, and action needs to be taken to resolve the country’s water shortage issues.

After reading the book Kalabagh Dam, A Goldmine for Pakistan written by Barkat Ali Luna (former Consultant To The World Bank) I was very surprised that the country hasn’t initiated any efforts towards constructing the dam.  It is also shocking that some politicians have given statements like, “we will die but we will not allow Kalabagh dam to be built”. People who make ignorant statements such as these are either uneducated on the issues surrounding Pakistan’s water shortage or simply don’t have the country’s best interests at heart. To counter statements like these it is important that the government and media engage in a campaign to educate the people on the importance of Kalabagh dam for Pakistan’s survival. This will bring the Kalabagh issue outside the realm of petty politics and create the political will to deliver on promises to solve Pakistan’s energy and water problems by building Kalabagh. Those in charge of the country have a responsibility to take a break from politicking and do something which will actually help the country.