Rohingyas cries should be answered

Rohingya Muslims have been in the news and minds of Muslims world. Reports of atrocities committed by the Myanmar security forces upon the Muslim-minority group has disturbed many inciting protests by regular citizens and condemnations by world leaders. Yet despite being in the international spotlight, nothing substantial is being done to stop it.

The UN high commissioner for human rights Zeid Ra’ad al-Hussein has called the indiscriminate killings, “a textbook example of ethnic cleansing.” As horrific as the tales of Rohingyan families shot dead, raped and villages burned are, the world remains silent just as it did during the Rwandan genocide 23 years ago and the Bosnia Massacre a year later. With no international interference, over 800,000 people were killed in the former and more than 8000 in the latter.

In a report afterwards, UN General Secretary Kofi Annan said, “The cardinal lesson of Srebrenica is that a deliberate and systematic attempt to terror, expel or murder an entire people must be met decisively with all necessary means.” It appears the lesson was not learned.

The mass exodus of refugees fleeing from Myanmar are straining the already overpopulated Bangladesh and its surrounding nations, including Pakistan which according to Al-Jazeera and UNHCR houses 350,000 Rohingya. The number is increasing with no end to the violence in sight.

The immediate matter to address is the safety of Rohingya under persecution and still living in the Rakhine state. Just as during the genocides in Rwanda and Yugoslavia, the UN should immediately create ‘safe areas’ under UN protection to protect Muslims in the state who fear for their lives. These sanctuaries will not only protect them and ease the flow of refugees from leaving the country, it will provide a point of access for international aid and press to pass through unfettered by the authorities. But unlike previous safe zones that failed, these must be impermeable to the violence and remain neutral.

Bangladesh is struggling to give space and food to the 863,000 refugees, causing malnutrition and diseases caused from overcrowding. An overpopulated country of 160 million with a low $1,500 GDP per capita cannot be expected to continue support

Idealistically, negotiations with the Myanmar government must be pursued. Sanctions on the state by the international community can apply pressure on Myanmar’s de facto leader Aung San Suu Kyi to enter into talks and take responsibility. With the start of the UN general assembly sessions this month, there is no better time for the world to unite and confront the Myanmar government. 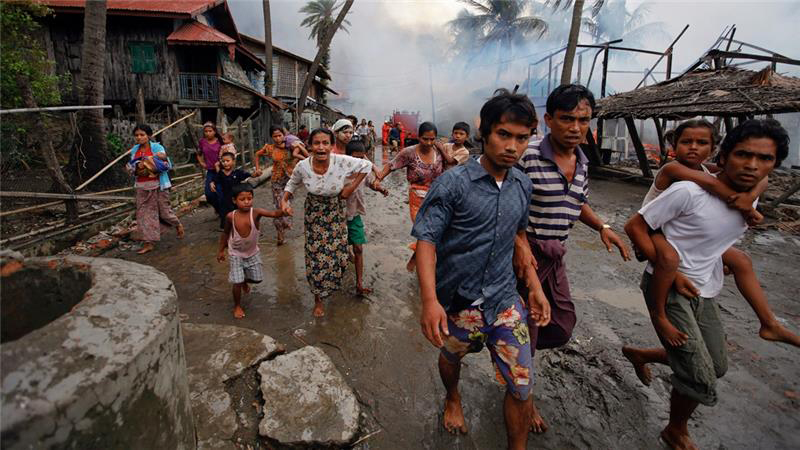 The Jewish genocide by Nazi Germany was put to an end by military force in World War II, which might make many consider military intervention as the most effective solution. It should be considered only as the last option. Entangling into a war with Myanmar would only add to the body count and create a breeding ground for Islamic extremists and a possible repeat of the Mujahideen. War is not a feasible option for many countries, including Pakistan, whose armies are already engaged in conflict.

It is important to remember that help can be given to the Rohingya before diplomatic solutions materialise.

Bangladesh is struggling to give space and food to the 863,000 refugees, causing malnutrition and diseases caused from overcrowding. An already overpopulated country of 160 million with a low $1,500 GDP per capita, it does not have the means to continue its support.

Antonio Guterres, UN General Secretary said that unless Aung San Suu Kyi acted now, “the tragedy will be absolutely horrible, and unfortunately then I don’t see how this can be reversed in the future.” By applying pressure, entering talks and providing humanitarian aid, the world still has time to yet prove that we live in a civilised world and humanity exists.

The writer is a freelance writer and marketing manager based in Peshawar, and am an MBA graduate of University of Peshawar