Ever since the mammoth demonstration at Minar-e-Pakistan last month, Imran Khan and Pakistan Tehreek-e-Insaf (PTI) have been the focal point of the media’s attention. A few months back, one would often come across the party’s supporters disgruntled by the lack of media coverage of their political gatherings — but that is now a thing of the past. The successful ‘show of strength’ in shape of the jalsa (rally) in Lahore has drastically elevated PTI’s image. It has demolished the notion that PTI is a mild deviation from the political landscape of the country — that it is just another political party in the clutter lacking any real support on the ground and one being dragged on merely by the adamancy of its founder. The PTI has emerged as the biggest threat to the status quo, i.e. the electoral supremacy of the two main political parties in the country’s democratic setup.

This has, however, been a long journey characterised by persistence; some even refer to it as stubbornness. The political pitch has proved to be more tricky and tedious than Imran Khan would have liked. However, one ought to give him credit for remaining firm in his resolve. By Imran Khan’s own account, even Jemima Khan, perturbed by Imran’s continuous failures, had asked him to let go of politics. The distinguishing factor, now almost a characteristic trademark, has been his refusal to give up despite repeated disappointments and dismal performances at the polls.

The biggest gain for PTI from the demonstration has been that the party has made it to centre-stage. However, catching everyone’s attention has its downside as well. Mr Khan’s recent interview in India has been received with scepticism in Pakistan’s media. His statement that Pakistan army and ISI will be under his control if the people of Pakistan give him the mandate to rule the country, proved to be surprising for a major chunk of local media. A well known female anchorperson whined throughout her show about why Imran Khan felt the need to say in India what he has deliberately avoided mentioning in Pakistan. Strangely, the ‘celebrated’ anchorperson didn’t bother to go through Mr Khan’s autobiography, which has been on the shelves for several weeks now, where he has expressed a similar resolve. According to him, “Neither should our army chief be allowed to talk directly to the US or any other government. The example for Pakistan is that of Turkey…” More amusing is the fact that previously many analysts and political opponents hurled allegations at him accusing him of being a stooge of the military establishment, implanted in the political system to safeguard their interests. Now, many have resorted to expressing pessimism about his political future in the wake of his remarks about the role of military. If this is to be believed then the establishment (if it really has such a powerful role to play even now) has only the PPP to lean on. Nawaz Sharif is adamant to play the game by his own rules. Already, we have an ironic twist in the ‘Game of Thrones’. Imran Khan has definitely emerged as one of the very few national leaders who have shown any inclination and a real yearning to absorb the ideological message of Iqbal. His ambition to address socio-economic challenges in today’s Pakistan, and make the founding fathers’ ideals relevant once again, rings sweet with the ever burgeoning restless youth of the country. Pakistan may not be in need of an ‘Arab Spring’ but it definitely needs to get out of the current autumn of gloom. One cannot turn a blind eye to the fact that PTI is certainly singing songs that resonate well with our youth. Their alienation from the political process seems to be transforming into a vicious urge to make their voices count, their presence felt. However, the million dollar question remains: will the PTI be able to convert this surge in support into electoral victory? Will it be a storm in the teacup against the established political culture and structure, or will the electoral world cup be won by the proverbial dark horse? Interestingly, there is no definite answer and speculations range from one extreme to the other. A lot will depend upon the ability of the party to take this momentum forward. Lack of political structure is PTI’s greatest weakness and it can be its greatest strength also. Assimilating the youth may not be possible for most traditional political parties with their well entrenched political elite. As roles are not strictly defined, workers tend to go the extra mile. The meeting at Minar-e-Pakistan was an expression of this phenomenon. For the moment, winds of change can be heard rustling around the provincial metropolis. The ripple effect is being felt throughout the country. If Imran Khan is to be believed, in his words, “After 14 years of most difficult struggle in my life, my party is finally taking off, spreading like fire across the country…For the first time, I feel Tehreek-e-Insaf is the idea whose time has come.” If nothing else, Imran Khan has delivered a strong wake-up call to his political opponents. Their response will play a vital role in determining the future of the country’s political landscape.

The writer is deputy editor of an Urdu national daily. He can be reached at usmanshami@yahoo.com or at @umshami on Twitter 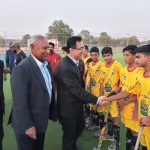