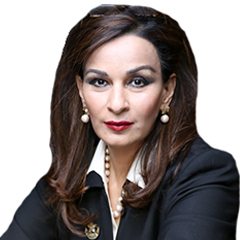 Bottom line: My readout on the
meeting between Prime Ministers Nawaz Sharif and Dr Manmohan Singh in New York is that it met its expected low bar. It didn’t do more than break the diplomatic ice, which it was set to do. Nor did it evolve into an opportunity for some serious peace takeaways, which is the leadership need of the Asian century. So it stuck to the Goldilocks middle; no big chill, but no big thaw either.

The meeting reflected little change in the Indo-Pak cycle of circling back to zero every so often.

In terms of output, in broad terms, it reduced the meeting to a positive, but carefully general resolve to stay engaged. In Diplomacy 101, this means let’s wait and see. In more concrete terms, it dealt fairly sketchily with the crisis de jour, which could have been ironed out in a Foreign Secretary’s meeting. India held back.

What could have been done: For two nuclear countries, and a ceasefire in tatters, the tasking of DGMOs on both sides to come up with a joint mechanism for lowering volatility was crucial, and can be rated as a long-needed deliverable. Parsing this further, I would have thought that it could have been pinned down to face-to-face meetings time-lined to a quarterly calendar. The DGMO phone call scheduled for every Tuesday, as per an established confidence building measure, should have been upgraded to substantive calls, not pro forma engagement.

In the medium-term, the back channel should have been better used to overcome executive drift in Delhi and Islamabad.

As a legacy politician on his last round, Singh could have worked up the courage to have a joint presser, or even greenlight a joint briefing by senior officials. With no big deliverables, which were never expected, they could have used it to signal hope for bilateral momentum.

Example: most Pakistanis and Indians don’t know that there are newer, better visa regimes available now. A joint presser would have given a better message. If nothing, the visa regime could have been re-plugged.

Background check: The current context of the ongoing crisis on the Line of Control (LoC) in Kashmir had upped the stakes on engagement, but lowered expectations. The LoC violence was in a dangerous spiral which, in any other relationship, would have merited serious government to government action. As it stands, the g-to-g engagement remained a flimsy band-aid, unable to staunch the bloodflow from the crisis. This made expectation management machines go into overdrive. The terms of engagement for the New York meeting became more and more reductive.

Closer to the meeting, the Indian backstep re-set the tone from Pakistan’s forward approach. Indian PM Singh’s finger-wagging seemed targeted at his fast-vanishing support-base back home. Usually such provocation (close to the bone or not), calling out Pakistan on being the “epicentre of terrorism”, would press all the wrong buttons in Islamabad, but under civilian control the message from Islamabad stayed temperate.

What’s changed: In the Indo-Pak relationship, a dangerous peace fatigue hovers over South Block, New Delhi, despite Singh’s personal championship for stabilization of ties. Voices for reason and reform are bobbing on the surface in both the media and regional political class, but the Congress-led coalition appears to have settled for policy drift with Pakistan as the best option. This slow burn is a bad plan, given that it takes seconds to light a fire on Indian mass media (and pull ratings), with a few bare-knuckle barbs flung at Pakistan.

In Pakistan, counter-intuitively, despite a higher public tolerance for extremism, voters stay with mainstream political parties that are able to lead a parliamentary consensus on investing in peace with India. Modi-like political grandstanding does not resonate with the new democracy zeitgeist in Pakistan. Nawaz Sharif, or any PM, goes to a meeting with the confidence that at least no one will pull the political rug from under him.

What’s likely: Sharif will likely stay the course on seeking new beginnings with India with a mandate behind him. Singh won’t be able to reciprocate. Everyone will wait for the new government in New Delhi. Expect more of the same from a Congress government, a temporary spike in temperature from a Modi-led coalition, followed by a probable year, or less, of living dangerously by sticking with Congress’s conditional diplomacy option. Modi may even use the rightist card to reach out, as Vajpayee had done. But none of this will work if the language of conditional diplomacy remains a strategic communication tool. It will, in fact, shrink the space for leaders to manage change in Pakistan. It is actually fast beginning to look and sound like coercive diplomacy. Neither will work for Pakistan.

As for the big old military veto on Indian policy, no doctrinal shifts in Pakistan will evolve while force postures from India remain the same on its western borders. But change is in the air here too: in a reflection of Islamabad’s broader regional calculus, Pakistan’s military has shifted large brigade strength to its Afghan border, while easing space to civilian voices on policy-making. In contrast, the Indian military, which used to have no say in policy making, has been known to exercise public vetoes on Siachin and Kashmir.

Sharif is right on the money when he says defence spending should go down in the region, but this policy will remain pie in the sky with the Indian military broadening its global spend. The Pakistan military will become no Austerity Jane either.

Control of non-state actors has become a major challenge for Pakistan, as it battles internal terrorism as well as a surge in volatility from Afghanistan while NATO forces make a security transition time-lined to 2014. This too will be difficult to change in the near-term.

What should have been done: Forget any grand bargain, but the Indians could have used the time to signal regional leadership and put dialogue back on the table. I don’t want to go there really, because it’s a flawed comparison, but the Putin-Obama-Rouhani symbolism comes to mind. It was a big week for global diplomacy in New York. After so many tries, and so many tracks seeking peace, why should India-Pakistan policy talks only work at crisis management decibels?

Looking ahead: The ball is very clearly in the Indian court. And this is a profoundly frustrating space for anyone seeking to take South Asia into the future it deserves. The Goldilocks increment is not a policy. It’s a crisis management tool. Time for India to live up to its size and stop seeing peace as a bargaining chip with Pakistan. Islamabad too needs to move on from old strategies and cut the foot-drag on the Mumbai trials.

Danger round the bend: Even the strident media in Pakistan agree that conflict is so last century. That may well change if India maintains its current status posture and tone.

The writer is Pakistan’s former ambassador to the US and Chair of the Jinnah Institute, Islamabad. She tweets @sherryrehman