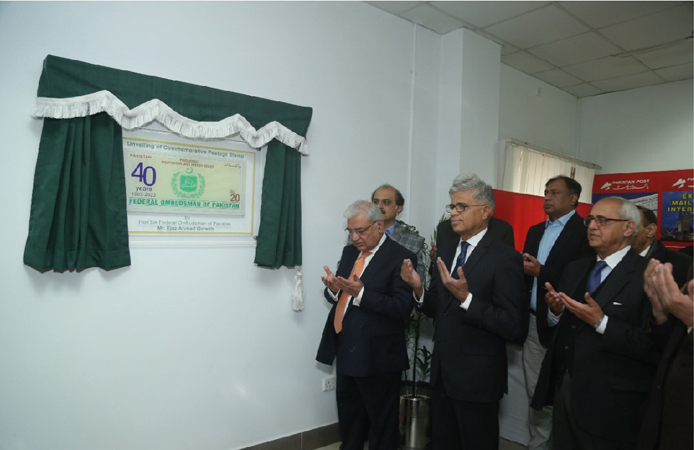 Addressing a widely attended Press Conference on the occasion the 40th year of the establishment of the Ombudsman institution in Pakistan, Mr. Ejaz Ahmad Qureshi, the Federal Ombudsman stated that maladministration and bad governance are two sides of the same coin. Both breed in an environment of favoritism, discrimination and corruption. Addressing maladministration, therefore, is essential for ensuring sanctity of human rights and achieving the ultimate goals of good governance and the rule of law. He added that the Office of the Federal Ombudsman was established vide the President’s Order No. 1 on 24 January 1983 with the explicit objective to diagnose, investigate, redress and rectify any injustice done to a person through maladministration by the government agencies.

Mr. Ejaz Ahmad Qureshi stated that the institution of Ombudsman has evolved over the years and is recognized today as an essential feature of every modern democratic society. The structure, scope and powers of Ombudsman, however, vary from one society to another and is directly related to the larger social, political and legal systems being followed in that country. The ombudsman institutions, around the world, act in support of supreme judiciary and contribute in making dispensation of justice more accessible and inexpensive. He added that the Wafaqi Mohtasib’s institution is fundamentally the poor man’s court. It is not an alternative to the supreme judiciary but plays a complementary role. The complainants are not required to hire the services of a lawyer nor have to face lengthy legal processes as the cases are disposed of within the prescribed limit of 60 days.

Reviewing the performance of the Wafaqi Mohtasib’s institution during the last forty years, Mr. Qureshi stated that more than 1.9 million households have benefitted from the services of this Office since its inception. He recognized the services of his illustrious predecessors who have contributed in developing this institution into a premier institution of administrative accountability in the country. Comparing the number of complaints received during the year 2022, he said that the receipts rose from 110,405 in 2021 to the highest ever number of 164,174 (49% increase) and disposal reached an all-time high of 157,770, marking an increase of 47.7% over the figures of the year 2021. He said that 137,423 complaints of Overseas Pakistanis were resolved with the increase of 133% as compared to 2021. He further stated that people’s trust has immensely increased resulting in a dramatic increase in the registration of complaints and complaints worth over Rs.3 billion of disputed amounts were addressed by this office during the last year, which otherwise would have added burden to the civil courts. He said that Government expenditure per complainant in disposing of complaint through Wafaqi Mohtasib construes negligible amount, thus it the most cost-effective way of providing relief to the common man.

Mr. Qureshi stated that the institution has expanded its operations by opening three regional offices in Mirpurkhas, Khuzdar and Swat and two Sub Offices at Wana (South Waziristan) and Sada (Kurram District) during the year 2022. He added that the ever increasing of complaints received was in fact a direct consequence of the massive support that the Ombudsman’s Office always receive from the print and electronic media in rising awareness about the scope and extent of its services to the general public. It was also a clear manifestation of the confidence and trust reposed by the people in this institution.

Referring to the initiatives, he has taken during the first year of his term of office, Mr. Qureshi stated that the institution has diversified its activities by undertaking inspections of various agencies against whom persistent complaints were pouring in order to improve their service delivery. An Informal Resolution of Disputes (IRD) project was initiated in April last year to informally conciliate and settle disputes between the two parties with their mutual consent. So far, 1114 cases have been disposed of while 266 cases were in process. He added that periodic inspections of different agencies by a team of his senior officers such as Passport Office, Islamabad International Airport, NADRA, Polyclinic, PIMS, CDA Facilitation Centre, Railway Stations and Utility Stores in different cities has helped improve their service delivery.

Referring to the legal framework which governs the operations of the Wafaqi Mohtasib’s institution, he added that the efficiency and efficacy of its operations was directly related to the enabling statutory provisions. These include, powers to undertake any investigation of his own motion into any allegation on the part of any agency, and stay operation of the impugned order/decision for a period not exceeding 60 days. Likewise, the Ombudsman enjoys same powers mutatis mutandis as the Supreme Court to punish for contempt.

Mr. Qureshi stated that while focussing on resolving individual complaints, equal emphasis is placed on ascertaining the root causes of corrupt practices and injustice. Accordingly, study reports have been prepared in the context of systemic reforms in regard to 28 government agencies and recommendations submitted to the government for ameliorating their operations. Recently, first ever empirical study focussing on street children in the ICT has been completed.

Highlighting the success of ombudsmanship in Pakistan, Mr. Qureshi added that the concept has been replicated into other areas of governance i.e. insurance, taxation, banking and harassment against women at work place. Accordingly, 14 Ombudsman institutions including at provincial level are functioning in the country.

The Federal Ombudsman further stated that his Office has played an important role in promoting ombudsmanship in Asia and the Muslim world. He is the current President of the Asian Ombudsman Association (AOA) which maintains its Secretariat in the Wafaqi Mohtasib premises. The AOA is a non-political, democratic and professional body of international character with 44 members representing more than two third of population of the world. Mr. Ejaz Ahmad Qureshi concluded that Pakistan’s active role in the global ombudsman fraternity projects an international face of the country promoting the cause of good governance, rule of law and inviolability of human rights.

Recognizing the significance of the role of ombudsman institution and its successful journey of four decades in providing speedy & inexpensive relief to a common man, Pakistan Post has issued a Commemorative Postage Stamp of Rs. 20/- on this occasion. The launching ceremony was held on the side lines of the today’s Press Briefing. The postage stamps are available in all the Post Offices in the country.