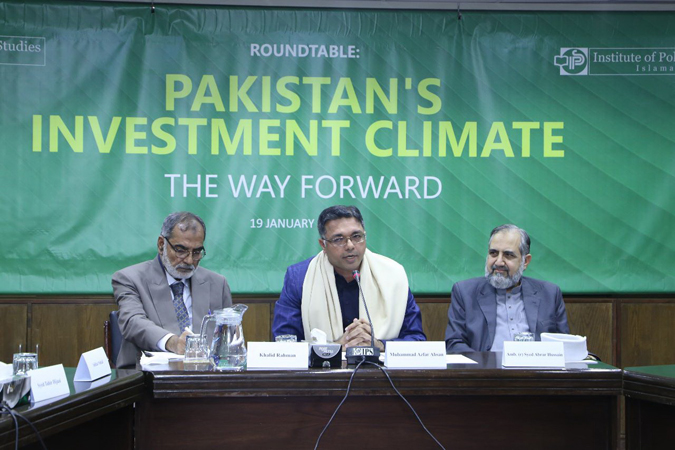 The objective of the session was to explore the current challenges faced by local and foreign investors and the desired economic strategies to overcome the prevailing crises.

Azfar Ahsan started his talk with three main issues; lack of vision, lack of political will, and the need for collaboration. “Although I have zero tolerance for corruption, I believe that a significant reason for the economic crises that we face is incompetence.” He further added that under the current circumstances, doing business in Pakistan is no less than jihad.

Elaborating on investment issues, Azfar Ahsan stated that investors need handholding and assurances, as their profits go back into developing the infrastructure in Pakistan; and one success story creates opportunities for others to follow. Similarly, Public Sector Enterprises (PSEs) must be privatized. PSEs have become a major drain on national resources and the Privatization Commission’s performance is dismal for the lack of expediency and identification of issues.

Extrapolating on Foreign Direct Investments (FDI), Azfar Ahsan said that the FDI portfolio is less than USD 3 billion, which is not sustainable for a country of over 230 million people. “Our investment climate is challenging for the lack of consistency and facilitation,” he emphasized. Commenting on the turnover and lack of continuity, he stated that he was the fourth BoI Chairman and saw the appointment of the sixth FBR Chairman and fifth Finance Secretary during his tenure.

Talking of FDI, Azfar Ahsan said, “Investors need handholding and assurances, as their profits go back into developing the infrastructure in Pakistan and one success story creates opportunities for others to follow.”

He insisted that Pakistan must focus on six to eight countries as best case studies, to attract investment. He further highlighted that Uzbekistan and Kazakhstan’s investment strategies are excellent model for Pakistan to follow. These economies have shown remarkable development in a short time. “We need to create a similar ecosystem in Pakistan with a simultaneous focus on G2G, G2B, and B2B.”

While contemplating China Pakistan Economic Corridor (CPEC) project, Azfar Ahsan highlighted CPEC as a great example of FDI and solemnly noted that not much is being done to productively utilize the opportunity. He said that the Chinese government has already established Special Economic Zones (SEZs) in 22 countries; BoI had recommended that this should be the top agenda in our meeting with China’s President Xi.

The Saudi government has funding available for eight priority sectors. Their biggest desire is to engage Pakistan as a Food Security partner; they want to establish an Agri Zone in Pakistan, in addition to an oil refinery in Balochistan. Unfortunately, the delay has been at our end, as we have failed to deliver ready projects; meanwhile, KSA is investing aggressively in other countries. Azfar Ahsan further added that during his meeting with KSA’s Investment Minister, they designed an investment strategy for both countries, based on an opportunity of a few billion dollars per annum. No progress has been made since then, and the State is only focusing on getting bailouts.