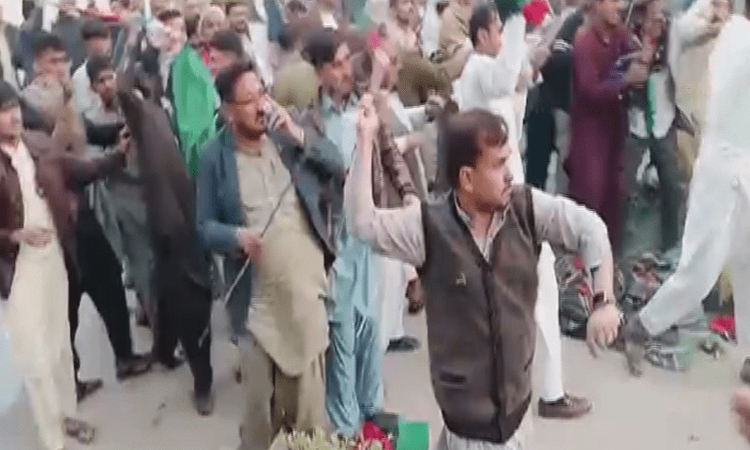 Hostile areas include district Keamari, Malir Halt, Gulshan-e-Hadeed and Qayyumabad, according to the TV channel.

The Pakistan Tehreek-e-Insaf (PTI) protested outside the office of the district returning officer (DRO) in district Keamari’s SITE area, where workers of the Pakistan Peoples Party were also present. Supporters of the two rival parties chanted slogans against each other. Outside the district commissioner’s office in Keamari, too, workers of the two political groups resorted to stone-pelting as a result of which two journalists were also injured. An additional police contingent was already deployed and water canon was sought outside the DC office ahead of PTI’s expect protest where PPP workers also stood.

One person was injured due to stone pelting outside the DRO office in district Keamari, where police also resorted to baton-charge. “The situation is under control and workers of political parties have bene dispersed,” the police officials said. Meanwhile, workers of the Jamaat-e-Islami (JI) staged protests at Malir Halt and Gulshan-e-Hadeed. JI workers have accused manipulation of local bodies election results in Gulshan-e-Hadeed’s union council 4. Their protest affected traffic flow on Sharea Faisal near Malir Halt. “Police personnel is present outside the DC office in Malir. Police are trying to stop workers of political parties from confrontation,” Senior Superintendent of Police Irfan Bahadur said, telling about the situation in Malir where clashes erupted between workers of the JI and the PPP. PTI workers’ demonstration at the Qayyumabad intersection ended after which traffic was restored.

Reports said that the workers pelted stones at each other resulting in the injury of police personnel and four journalists. on the other hand, they also broke the window panes of the DRO’s office. PTI MNA Syed Ali Zaidi said he was also injured in the clash. PTI’s Khurram Sher Zaman said the LG poll results were being tampered. “We are demanding the DRO and the DC to notify the result as per the form-11, but they are not responding as they are being pressurised by the provincial government”, he claimed. PTI MPA Ali Zaidi said the result was being changed inside the DRO s office. “PPP’s hired rascals came in the presence of the police and started pelting stones at us which left me injured”, he added. PPP’s Sharjeel Memon said the PTI workers with a plan to attack the PPP workers. “It is condemnable to attack the opponents after facing defeat in election, however, the administration will take action against the perpetrators”, he added.

Meanwhile, Election Commission of Pakistan (ECP) on Wednesday took notice of irregularities during Karachi local government elections in six union councils (UCs). The notice has been taken on the application of JI. The UCs include 3, 7 and 8 of Orangi, UC-3 of Mominabad, UC-12 of Manghopir and UC-1 of Gulshan. The hearing of the case has been fixed for January 23 and notices have been issued to district returning officers (DROs), returning officers (ROs) and candidates.