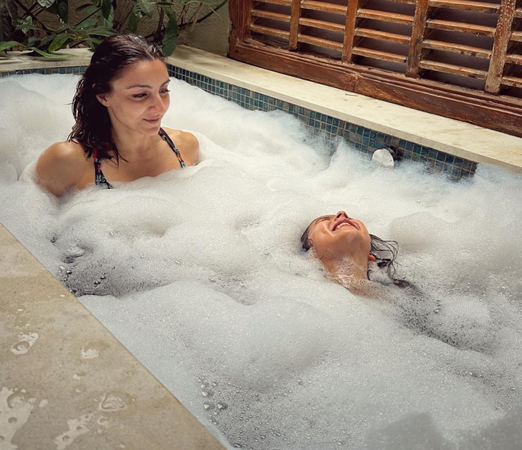 Soha Ali Khan is currently on a vacation with daughter Inaaya Naumi Khemmu at a resort in Goa. Khan has been sharing glimpses from her weekend vacation. Yet, she shared another one where she can be seen having a quality time with daughter Inaaya. The mother-daughter duo takes a soothing and relaxing bubble bath together.

The first picture showed Inaaya smiling while flashing her adorable dimple whereas mother Soha watches her with love. In the second picture, Soha kisses Inaaya’s head with warmth. She wrote in the caption: “Don’t burst my bubble! #weekendvibes.”

The mother-daughter moment gauged a lot of attention on social media. Fans could not stop gushing over the loveable pictures. They are also calling baby Inaaya the little version of Pakistani actor Hania Amir.

One of the fans wrote: “Your daughter looks like the little version of Hania Amir.” Meanwhile, another wrote: “Inni has got a dimple just like her Nani Sharmila Tagore.” Many other fans dropped heart emoticon on the post.

On the professional front, Soha Ali Khan recently featured in an Amazon Prime web-series Hush Hush with Juhi Chawla. She will be next seen in Chhorii 2 with Nushrratt Bharuccha, reports News18.