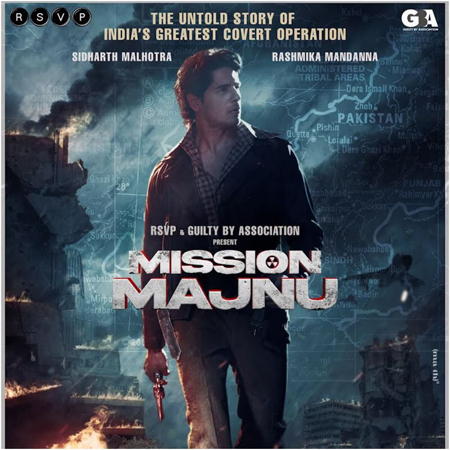 Pakistanis trolled Sidharth Malhotra and Indian filmmakers for their upcoming movie Mission Majnu because of their obsession with false and stereotypical portrayal of a Pakistani.

On Monday, Netflix released the trailer of an upcoming Indian movie, Mission Majnu starring Sidharth Malhotra and Rashmika Mandanna in lead roles. The storyline of the movie follows an Indian spy who goes undercover in Pakistan to expose a secret nuclear weapons programme.

Taking to his Instagram account, Malhotra shared the trailer of Mission Majnu with a caption, “The one who thinks about the country before himself, he is the #DeshKeLiyeMajnu.” In the trailer, the Ek Villain actor can be seen wearing Shalwar Qameez along with a headscarf as he offers prayers. The actor is also seen wearing Surma (kohl) in his eyes and an amulet around his neck, continuing the Indian stereotype of Pakistanis.

Soon, the trailer went viral, and Pakistani social media users trolled the actor and Indian filmmakers for their obsession with Pakistan. A person commented on Malhotra’s post, “By the way bomb has been made, now don’t show that India was successful in this mission.”

Many people asked what was Indian filmmakers’ lives without Pakistan, and called for them to come up with a new and different concept.

A person relived the 2019 incident when two Indian aircraft were shot down in an aerial dogfight by the Pakistani forces and the pilot who ejected the aircraft, Indian Air Force Wing Commander Abhinandan Varthaman, was arrested by Pakistani army. He wrote, “Tea was fantastic. Indians can only be happy making movies.” An internet user advised Netflix, “Cancel the movie as you guys desperately need a new plot.” Some Pakistanis are afraid Bollywood might make a movie showing India beating Pakistan in Champions Trophy 2017 final. A Pakistani comedian and content creator, Hasan Bin Shaheen, made a hilarious reaction video.