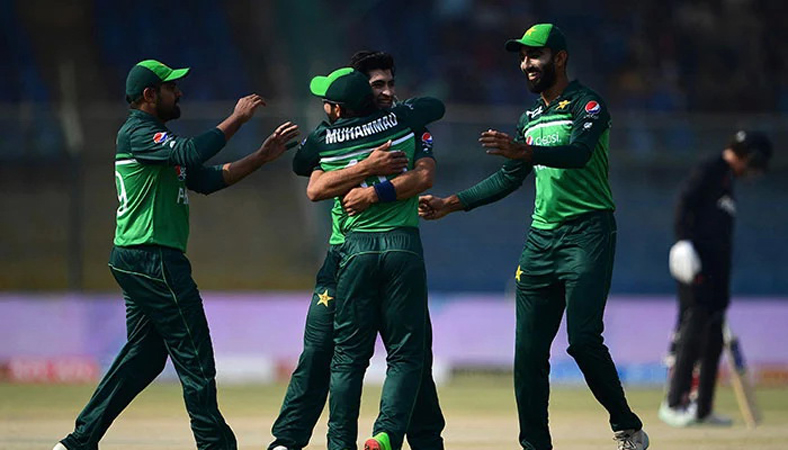 Pakistan strolled to a six-wicket victory over New Zealand in the first one-day international on Monday after fast bowler Naseem Shah took five wickets in Karachi.

The 19-year-old grabbed 5-57 for his second five-wicket haul in just four ODI appearances as New Zealand, sent into bat, managed 255-9 in their 50 overs at the National Stadium. Mohammad Rizwan (77 not out), skipper Babar Azam (66) and Fakhar Zaman (56) then helped Pakistan cruise to victory with 11 balls to spare.

The home team took a 1-0 lead in the three-match series. The remaining matches are on Wednesday and Friday, also in Karachi. Azam and Zaman put on 78 runs for the second wicket after Imam-ul-Haq (11) fell in the sixth over.

Zaman hit seven boundaries in his 74-ball knock before he was bowled by Michael Bracewell, while Azam was stumped off Glenn Phillips after facing 82 deliveries.

Rizwan, who added 60 with Azam, put on another 64 with Haris Sohail who made a quick-fire 32. Off-spinner Bracewell was the best New Zealand bowler with 2-44. Earlier, it was Naseem´s fiery bowling that kept New Zealand in check.

The teenager dismissed opener Devon Conway in the first over of the match for nought to kickstart Pakistan. Naseem returned for a second spell to account for Phillips (37), Bracewell (43) and Henry Shipley (nought). Naseem, whose first ODI five-wicket haul was against the Netherlands in August, rounded off his night by dismissing Mitchell Santner for 21 in the final over. Tom Latham (42) and Daryl Mitchell (36) stabilised the innings during a fourth-wicket stand of 56, while Phillips and Bracewell added 66 off 59 balls for the sixth – before Naseem dismissed both in successive overs.

Skipper Kane Williamson scored 26 before he was beautifully bowled by debutant leg-spinner Usama Mir, who finished with 2-42. Phillips hit a six and a four in his 53-ball knock, while Bracewell cracked four boundaries and a six.