‘Joyland’ has numerous grounds to win the Academy Award

* Mumtaz, Haider's wife, is a self-sufficient, intelligent working woman whose main ambition is to accomplish her profession as a beautician 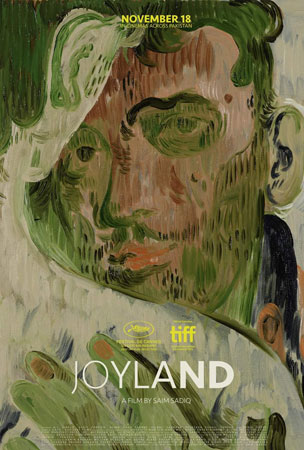 The film opens with Haider playing with his nieces and suddenly he gets a call from hospital – his sister in law is about to give birth.

The tragedy struck when again they witness the birth of a girl. Haider is only member of his family whose existence is ignored – he is ghost- mainly due to unemployment. In a society where woman works and men do nothing is anathema for the whole lot. Haider does all of the domestic chores, such as ironing the clothing, cooking daal, and butchering the goat, without the slightest gesture of thanks which is common in our society. The scene and the frame that director Saim Sadiq has used where goat is being slaughtered have an emotional attachment inflicting on the psyche of children looking at goat while being chopped. Haider also listens to his brother Saleem’s insults, which include “Jab paise ghr mai aaty hain to koi nhi puchta,” and “or aurat ki kamaye se to acha hee hai.”

Mumtaz, Haider’s wife, is a self-sufficient, intelligent working woman whose main ambition is to accomplish her profession as a beautician. This desire was expressed to Haider even before they married, to which Haider agreed; however, the situation took a disastrous turn; for the family was ruled by patriarchal Amanullah, Haider’s father, who initially agreed for Mumtaz’s job, but as soon as Haider got the job in erotic theatre as a dancer, he orders her to quit. Mumtaz is forced to leave her job so she can look after household and conceive a child. But how could she, when one of Saleem’s daughters sleeps between her and Haider at every night. Mumtaz’s sole buddy at home is Nucchi, who has assimilated into the patriarchal society.

Meanwhile the situation between Abba and Mrs Fayyaz tells more of a people whose partners are lost and had live their rest of life in solitude to pursue the gathering of someone to share something. Sometimes it appears to be romantic entanglement between them and other times it’s just nothing more than a snap.

Haider obtains employment in sexual theatre through his pal Qaiser. The character Biba is introduced in the theatre. There isn’t much to say about her acting because she was simply being herself. As the film progresses, we see Biba and Haider’s enraptured eye contact and sexual desire for another. Haider fell in love. Now this is the part where the controversy was created and people were trying to ban the movie, well the censor board cut those scenes in which, might be possible, Biba and Haider were seen lip locked. Biba plays at an erotic theatre, but her items are not well accepted by the public, who prefer to see a busty lady rather than some Trans. As soon as the lady leaves, the audience leaves, ignoring Biba’s performance. Theatre management deliberately causes sound problems, forcing her to cease performance. Biba attempts to seduce the management and talk her way into getting her concert, but in vain. Who wants to see Trans performing in comparison to the women?

Biba is challenged at every stage of her life; she can’t even sit quietly in a railway seat without being taunted and judged. Saim Sadiq has worked hard to depict the pains and tribulations of trans individuals, yet his film fails to capture those feelings. When Biba narrates the incident of her friend who was murdered by the culprit because she refused to dance with her, the action is utterly lost due to speech delivery or a lack of appropriate lines. For one reason, I couldn’t empathise with Biba’s anguish, not because of her gender, but because of the absence of emotions depicted in that scenario.

Later Mumtaz is caught by Saleem while peeking at a man outside her house, and Saleem while doing ablution at mosque tell Haiders to look after her wife, in other words to satisfy her desires. In our society it’s very hard to pour out the words directly to one’s brother or friend about having intercourse with their partners.

As it reaches near the climax, Mumtaz became pregnant – boy in her belly – which she tells Nucchi in rather unpleasant way while upsetting her. Abba informs everyone that one of the men warned me that there would be no men in our family after Haider, yet Mumtaz has a boy in her womb. Through this scene Saim Sadiq has brilliantly portrayed the believe and rejection of prophesies and superstition within a moment. After that Mumtaz is depressed and unhappy, either she didn’t want to conceive the child or because of the job she left. But being depressed at the point when a minor life is swimming inside you was something hard to digest, and when she commits suicide, my emotions were numbed.

The film is shortlisted for Academy Awards for best foreign language film competing with the likes of Bardo False Chronicle of a Handful of Truths, Last Film Show, All Quiet On the Western Front, Holy Spider. However, winning the Oscar in that category for Joyland would be a surprise in my opinion, but there are numerous grounds for it to win, especially because the film is from a third-world Muslim nation. Will it do what A Fantastic Woman did? Let us all hope for the best.

At the end I just want to ask one question from the director that what he tried to emphasis when Amanullah was cutting his 70th cake and the suddenly the candle of the cake falls down. Were you trying to suggest that at that age the man has lost his potential of erection? Impressive isn’t it?

The writer is a student at Sindh University and a film critic. He can be reached at saqlainali878@gmail.com