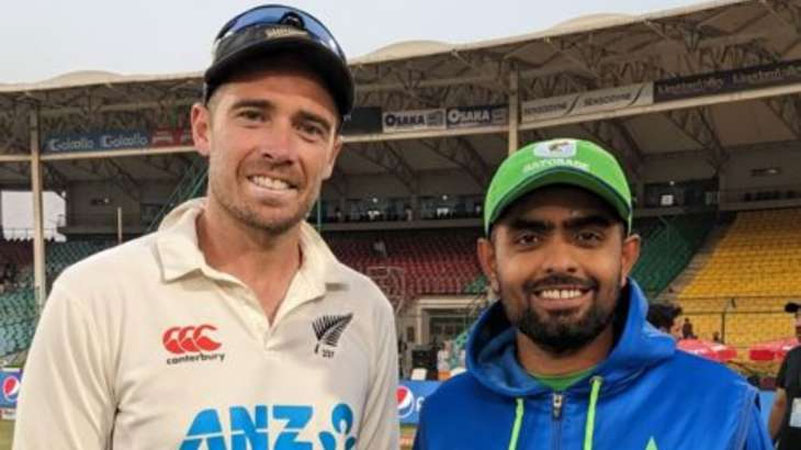 KARACHI: Pakistan and New Zealand will be aiming for a series victory when the two sides lock horns in the second and final Test of their two-match series, which begins at National Stadium here on Monday (today). The first Test ended in a draw at the same venue last week. New Zealand had made a strong bid to chase down 138 in the last hour of the first Test on Friday after Pakistan captain Babar Azam made a daring declaration before poor visibility halted the Black Caps at 61-1 in the eighth over to draw the game. The Pakistan Cricket Board was forced to organise both test matches in Karachi due to weather concerns in Multan where winter smog and fog have delayed flights and may have disrupted hours of play. First Test’s draw broke both team’s four-match losing streaks that included Pakistan’s 3-0 whitewash at the hands of England and its aggressive style. England swept away New Zealand in the summer before handing Pakistan their first-ever 3-0 defeat at home last month through its relentless aggressive batting on flat and slow-turning pitches.

Ne Zealand’s former captain Kane Williamson said that Pakistan had always produced some exciting talent that had amazed everyone on the field. Speaking to reporters ahead of the second Test in Karachi, the stylish batsman said that it was great to be playing in Pakistan for the first time. “We had fantastic match in last game, and, all chances of results coming into the last day. It was a good surface, bowlers had to work pretty hard and we saw a little bit of assistance for the spin coming late into the match,” he said when asked about the first match. “We’ll have to assess conditions going into this next game. It looks perhaps a little bit different. What’s important for us as a team is that we assess and try and stick to our plans,” he expressed ahead of the next game. Talking about Pakistan cricket, Williamson said that one thing you always notice with the Green Shirts was the depth and certainly in their fast bowling ranks.

Pakistan are languishing at No. 7 in the ICC World Test Championship table while New Zealand have endured even more disappointment and are 8th despite beating India in the inaugural WTC final at Lord’s last year. Pakistan’s poor form prompted a change in the leadership of the Pakistan Cricket Board where Ramiz Raja was sacked as chairman shortly after the 3-0 loss to England with former PCB chairman Najam Sethi reinstalled as the head of the new cricket board management committee.

Babar Azam finished 2022 as the top run-scorer in Test matches with 1,184 runs in nine test matches with four centuries, but Pakistan batters have generally struggled to come close to their skipper’s form. The middle order has consistently collapsed as Pakistan lost four Tests in a row at home for the first time in its cricketing history while drawing the remaining three games – twice against Australia and one against New Zealand. Despite the poor run, Babar says that competing against much higher-ranked teams – Australia, England and New Zealand – gave his squad plenty of experience. “We didn’t perform the way we had expected in red-ball cricket,” Babar said on Sunday. “Three sides ranked above us played in Pakistan that provided us a huge learning opportunity.” The flat and dry pitches remained a focal point throughout Pakistan’s home Test matches. Pindi Cricket Stadium’s lifeless pitches at Rawalpindi received two merit points from the ICC after hosting Australia and England in March and December, respectively.

But the new PCB regime hopes the wicket for Monday’s second Test will be livelier and will provide bowlers with more opportunities. New chief selector Shahid Afridi and a former PCB curator were overlooking the pitch preparation for the past two days. Afridi had criticized the lifeless pitches and wanted to see a bit more grass left on the wicket that could assist fast bowlers early and have spinners come into play later as the game progresses. “We are deliberating upon preparing a pitch that may help bowlers and batsmen alike,” Afridi said. “We cannot become a top team by playing on this type of wickets. The wickets on which we’ve been playing are not good for our bowlers.” The two-Test series will be followed by three ODIs – also at Karachi – from Jan 9-13.