Falak Shabir thanks ‘begum’ and ‘beti’ for intimate birthday celebration 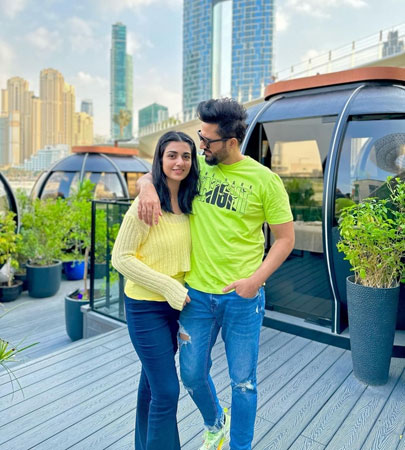 Pakistani singer Falak Shabir turns a year older on Wednesday, therefore his wife/actor Sarah Khan throws him an intimate birthday surprise consisting of just the two of them and their daughter Alyana.

Falak, taking it to his Instagram, shared a glimpse of their small scale birthday party where the three of them can be seen laughing, cheering singing the birthday song. He wrote: “I don’t like fancy celebrations. Thanks begum @sarahkhanofficial and beti.”

On the other hand, Sara also shared a romantic picture of her with Shabbir and wished him a happy birthday. She wrote: “Happy birthday to my forever @falakshabir1.”

Sarah and Falak ‘s couple is admired all over Pakistan as the two praise, love and encourage each other a lot publicly. The singer very often expresses his love for his wife on internet.

The Roag singer came into public eyes more after he started a thing as a ritual for wife Sarah ie treating her with flowers every day in the morning.

Sarah Khan and Falak Shabir got married in July 2020. The two welcomed an adorable little daughter Alyana in October 2021.