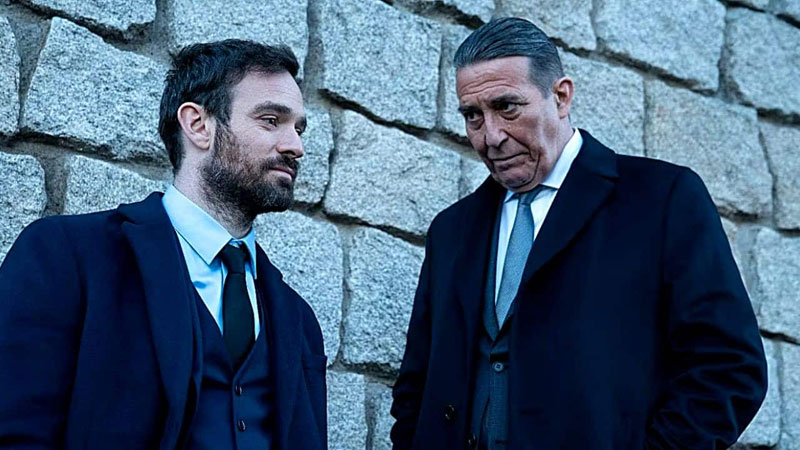 Although just about every actor on the face of the Earth has enjoyed a stint as the frontrunner to play the next Bond, Charlie Cox seems to be the sole exception.

Despite sharing an age, a gender and a race with every screen Bond so far – not to mention a handy sideline as a superhero given that he plays Daredevil in the Marvel cinematic universe – for some reason he hasn’t quite made the cut.

The reason, it seems, is Treason. A big part of the Potential 007 audition sequence is to play someone slightly Bondy on the small screen, as Tom Hiddleston did with The Night Manager and James Norton did with McMafia.

It’s an opportunity for them to dress the part, brood in a variety of opulent locations and occasionally mess around with guns. Treason – a spy thriller written by the Oscar-nominated co-writer of Bridge of Spies – sounds as if it should have been cut from the exact same cloth.

And yet our first meaningful introduction to Cox’s spy comes during a scene in a school library where he cheerfully tells a bunch of primary-age kids what it’s like to be a spy. Which, however you cut it, isn’t something you can imagine Daniel Craig doing.

Indeed, throughout the course of Treason, Cox is less an international man of mystery and more a lovely Labrador who has somehow gained the skill to operate a humanoid robot.

But Cox is no mere spy. Despite looking like a particularly meek supply teacher, he is in fact second in command at MI6. And when his boss is incapacitated during an errant whisky-poisoning accident, it falls to Cox to run the ship. This is plainly ridiculous, since the man looks like his natural calling is to host a CBeebies series about the importance of cuddles, but let’s go with it.

It is extremely difficult to mention anything specific about the plot from this point onwards because that would unravel the entire series, but it is safe to say that things don’t go well. Hinds’s poisoner is Olga Kurylenko, who has a past with Cox and things get knottier and knottier until his whole family ends up involved in the mess.

I can tell you that the plot involves a full English of contemporary references – kompromat, shady Russian lords, a Conservative leadership campaign – and that the show is set in London, because this is one of those shows where scenes don’t count unless there is an immediately recognisable central London landmark in the middle of the screen. Any more than that would destroy the ride. It’s a pretty good ride, too. Treason manages that brilliant television trick of sucking you in with its labyrinthine plot so effectively that you don’t realise quite how stupid it is until long after the credits roll, at which point it hits you like a ton of bricks. But, still, it has the air of unfulfilled promise.

It’s weird, in this age of Far Too Much Television, to wish that a show went on for longer, but this is the case with Treason. It’s a five-part, fairly finite limited series, but it feels as if it was set up to be something far more substantial. What it feels like, in fact, is one of those big old-fashioned American network shows that ran for half a year at a time. One of those pacy, inexplicable spy thrillers like 24 or Homeland that never managed to run out of complicated conspiracies that went all … the … way … to … the … top. I dare say I would have enjoyed Treason a lot more if this had been the case. Instead, with less than four hours total running time, Treason hits all of its requisite beats in nothing less than a blind panic.

Someone gets abducted, but then they’re found before anyone has the chance to start worrying. There’s a government mole, but that’s all sorted out with the wave of a hand. If anyone seems in any way suspicious or mysterious, their true motives are usually explained within a scene or two, so that the show doesn’t have to drop its mad clatter to the finish line.a
It’s fun, but frustrating. A few more episodes spent with Labrador Bond and all his stupid problems, and Treason could have been a belter.