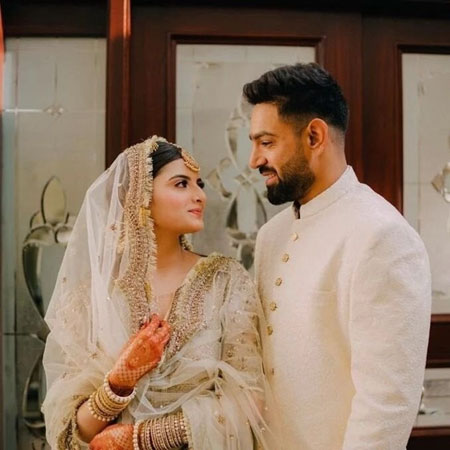 Cricketer Haris Rauf has tied the knot with his beloved Munza Masood Malik, a social media influencer and model based in Islamabad. Dressed in color-coordinated trousseau, the groom donned an ivory sherwani for his Nikkah ceremony, while his wife chose an ivory embellished dress. The blushing bride chose Hussain Rehar for her big day. Her dress is from Rehar’s latest bridal collection Moraan Sarkar. Rauf’s team members from Lahore Qalanders also made an appearance at the ceremony. Amongst many, Shaheen Afridi and Umar Akmal were spotted at the celebration. Before his wedding festivities, the pacer was ruled out of the remainder of the Test series against England due to an injury, the Pakistan Cricket Board (PCB) said in a statement on December 6. This series marked his Test debut.