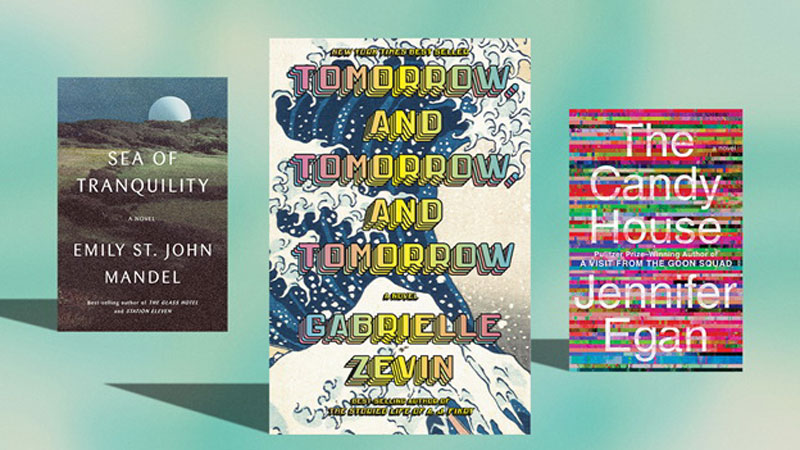 After several lavish years, in which the bounty of big-name books became almost impossible to keep up with, publishing is finally catching up with itself. 2022 was arguably slower, and quieter, than its recent predecessors – there was no Sally Rooney to adorn tote bags all over Brooklyn, no Jonathan Franzen dominating the discourse. Instead of fighting over which blockbusters deserved their place at the very top, there was time and space for titles of all sorts to find a reading audience. Likely, no two “best of” lists will look alike this year, which means the glitch in the system may finally be repairing itself; the algorithm is weakening. Here, THR chooses its top 10 titles and a host of additional works we hope you’ll pick up.

1. Sea of Tranquility, by Emily St. John Mandel — Emily St. John Mandel is so good at world-building that she can do in a slim volume what most authors would need – or take, unnecessarily – a doorstopper to achieve. She continues the legacy of soulful science fiction, that she began with Station Eleven and perfected in The Glass Hotel, with this sister (cousin?) novel that spans centuries and worlds: It opens in the 1800s on a small island in Canada, and follows a group of interconnected characters all the way to a futuristic moon colony, as they all experience the fallout of the same, seemingly unexplainable, space-time phenomenon. All the while she performs her particular Mandelian trick of the pen: While you think you’re solving a mystery, you wind up considering the very meaning of our place on this planet.

2. Tomorrow and Tomorrow and Tomorrow, by Gabrielle Zevin — Tomorrow’s plot synopsis threatens to betray itself – the book, which spurred a tense multi-house auction for publication rights and an even bigger fight for the adaptation rights, is about two childhood friends who reconnect in college and design a video game together, going on to become rich and famous. Niche? Perhaps. But let it be known that this book is for absolutely everybody. The plot device is just that: a way to root out the existential questions that plague every important friendship. How do we care for each other, how do we balance a desire to have everything with our basic need for just a few things, is anything in life more important than coming back to the people we love? No one who picks up this book will regret it.

3. The Candy House, by Jennifer Egan — A Visit From the Goon Squad, the 2010 predecessor to Candy House, was one of the best – if not the best – novels of the previous decade, bringing a razor-sharp and fresh twist to the occasionally overplayed multi-narrator storytelling device. Skepticism would be a healthy reaction to a sister novel, but Egan’s latest is a beautiful reminder that the literary world has not fallen prey to Hollywood’s existing-IP creative drought. Candy House, which resurrects a few key characters and places them in a near-future where the latest tech innovation involves uploading your subconscious onto a public server, is as delightfully weird, eerily prescient, and thought-provoking as one could hope.

4. All This Could Be Different, by Sarah Thankam Matthews — A debut novel with the same depth and delicacy of the most experienced authors, All This Could Be Different captures that very particular millennial ennui: its protagonist, graduating college into a drought-filled job market and a political system that leaves her behind, is suffering the side effects of capitalism before readers’ very eyes. But, in a particularly skillful literary trick, this book of misery is anything but miserable to read. Matthews gives us the story of a young woman who makes bad decisions but is never bad; and a stark reminder that we’re all just trying to get by.

5. Either/Or, by Elif Batuman — Batuman’s heroine, previously seen in 2017’s The Idiot, is an aspiring flâneuse momentarily held captive by her circumstances not unlike the literary cousin of The White Lotus’ Portia (trade a disastrous work trip to Taormina for sophomore year at Harvard). The novel, which uses Selin’s college reading list, and her reactions wherein, to catalog her search for meaning in a world that feels out of her reach, is delightfully analog in nature. It’s full of meandering discourse and big questions, both a challenge to our page-turning, commercial thriller literary culture and a reassurance that you always have more answers than you did the day before.

6. Stay True, by Hua Hsu — The tragic loss of the author’s college best friend serves as the centerpiece to this memoir that’s both heartbreaking eulogy and poignant coming-of-age storytelling. Hsu, a star staff writer at The New Yorker, transports his readers to 1990s San Francisco, a time of grunge bands and youthful longing, and his words about his late friend will remind everybody of what we all used to have.

7. To Paradise, by Hanya Yanagihara — The A Little Life author’s long-awaited follow-up trades gut-wrenching interpersonal heartbreak for more existential crises – the three-part book traces the climate change and pandemic-driven downfall of society as we know it – yet within those big topics lie intimate character studies written with the utmost care.

8. Acts of Service, by Lillian Fishman — This titillating debut novel, about a young Brooklynite who stumbles into a poly relationship, takes everything you thought you knew about sexual politics and power and turns it on its head – it’s Sally Rooney, with an axe to grind over heteronormativity.

9. Vladimir, by Julia May Jones — A campus professor finds her internalized misogyny put to the test when her husband – who is something of a university celebrity – gets caught in the crosshairs of the Me Too movement. To cope, she begins to obsess over a newly arrived colleague, and what starts as a meditation on power and sexual politics goes deliciously off the trails with a third-act turn no reader could predict.

10. Ghost Lover, by Lisa Taddeo — Lisa Taddeo, of Three Women fame, brings more of femininity’s complexity to center stage in this collection of short stories about women behaving badly. She explores desire, but this time her protagonists don’t long for sexual connection so much as they do a reclamation of control, in whichever ways they can get it.