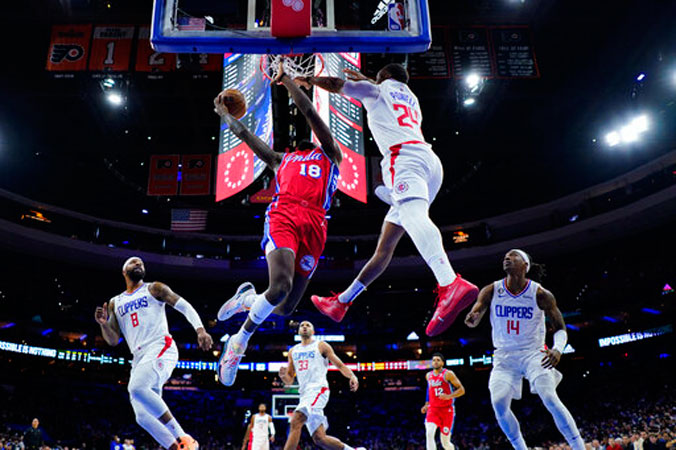 PHILADELPHIA: Joel Embiid scored 44 points, James Harden had a career-high 21 assists in a triple-double and the Philadelphia 76ers overcame a 20-point first-half deficit to beat the Los Angeles Clippers 119-114 on Friday night. “That’s big-time for us. That just shows that we stayed together, we trust each other and we know what we have to do,” Embiid said about the comeback. “We started off the game soft, especially defensively, and as soon as we turned it up it changed the whole game.” Harden had 20 points and 11 rebounds to help Philadelphia sweep a seven-game homestand and improve to 19-12. Harden tied Wilt Chamberlain and Maurice Cheeks for the franchise game assist record. “That’s some great company. Mo Cheeks was one of my coaches (in Oklahoma City), and then Wilt, I feel like he has every record,” Harden said. “So just being in the conversation with some of the best basketball players to ever touch a basketball is always a blessing.” Harden’s performance, approach to the game and evolving chemistry with Embiid drew praise from the coach Doc Rivers. “This is a generational scorer that has taken and decided to be a point guard, who still scores, but to be a point guard for this team,” Rivers said. “That’s hard to do.