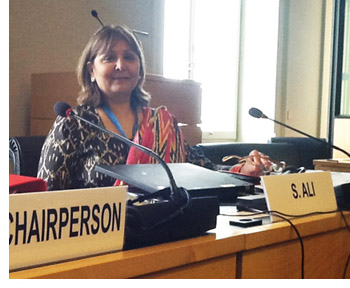 On Tuesday, the United Nations named three women to lead a rights investigation into Iran’s violent crackdown on women-led protests, which have roiled the Islamic republic for more than three months.

The investigation will be led by Hossain, a long-time human rights activist, according to the council presidency.

Iran is highly unlikely to allow the trio to enter the country and carry out their mission, with Tehran fiercely opposing the creation of the international investigation that 47 rights council members voted for last month.

The three women will document the Iranian authorities’ repression of the protests and potential human rights violations with a view to possible legal action against officials in Iran or elsewhere.

Mass protests have swept across the country since September, following the death in custody of Iranian-Kurdish woman Mahsa Amini, resulting in violent and sometimes deadly clashes with security forces.

Authorities have executed some protesters and sentenced others to death for their roles in what they call riots instigated by arch-foes Israel and the United States.

The United Nations estimates that around 14,000 people have been arrested since mid-September, while Oslo-based NGO Iran Human Rights says 469 protesters have been killed.

Who is Shaheen Sardar Ali?

Shaheen is a law professor at the University of Warwick in the United Kingdom who specializes in Islamic law, human rights, and the rights of women and children.

In Pakistan, she was the First Chairperson/Minister of State, National Commission on the Status of Women (2000-2001), and the Khyber Pakhtunkhwa Government’s first female cabinet Minister for Health, Population Welfare, and Women’s Development.

She served as a member and Vice-Chair of the United Nations Working Group on Arbitrary Detention from 2008 to 2014, and she has advised numerous national and international organizations.

She is fluent in English, Urdu, Pashto, and Punjabi can read and write Arabic, and has a working knowledge of Persian (Farsi).