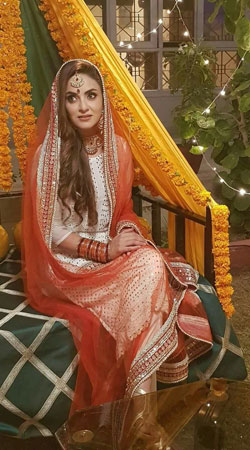 She shared tips for having a successful and happy married life.

Nadia Khan, who has worked in super hit dramas “Main Aur Tum” and ‘Aisi Hai Tanhai,’ said their families are very loving. She said every man and woman should think of getting married to a person who does not change them.

The “Aisi Hai Tanhai” star revealed that when she told her father that she has stopped working, hosting shows and wearing the dress of her choice, her father told her that she isn’t living in the true sense of the word.

She added her father told her that she should not change herself for anyone.

Nadia Khan said her husband is just as creative and open-minded as she is, adding that he has the same ideas which she used to have before 2009. The television celebrity said her husband does not judge nor taunt her about her lifestyle.