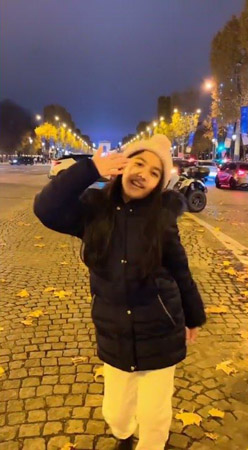 Social media is abuzz with the viral video of a Pakistani woman Ayesha, dancing to the remixed version of late singer Lata Mangeshkar’s “Mera Dil Ye Pukare” at a wedding.

Ayesha has become an overnight sensation with her phenomenal dance. The song started trending as well. Recently, matching steps to this “super trending song” was another girl from France named Raena. The best thing about her dance moves is that she has replicated the exact steps done by Ayesha. She wrote in the caption, “Dancing on this super trending song …@oyee_ayesha; Follow me @raena_rockstar if you are new to this page.”

Social media users have loved the video and come up with a host of interesting reactions. Users informed Raena that Ayesha has shared her dance performance on the Instagram story section. The story is not available now. Another user called Raena a little princess and wrote that she has given a phenomenal dance performance on a floating road in Paris

A third user wrote that she has done brilliant work, but could have done it in a slightly better way. Raena took this criticism positively and thanked the user. Some users also applauded her and wrote that her performance is top-notch in comparison to Ayesha. One of them demanded that Raena should come up with a second part to this video.

The reel was shared on December 5 and garnered more than 500,000 views.

Apart from this performance, many other users have also come up with their renditions of the viral number remixed by DJ Usman Bhatti. Popular Tanzanian influencer Kili Paul and his sister Neema Paul have given a fabulous performance on this song.

The grace and class with which this brother-sister duo performed their every step was a treat to watch. The Instagram reel in which they have given this performance has garnered more than 3,100,000 views and counting. Celebrity makeup artist Neha Adhvik Mahajan and other users have applauded this dance performance.